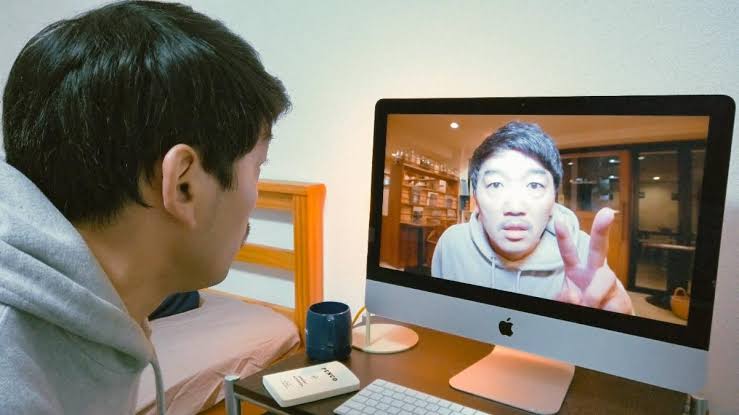 Perhaps it is the inner-wannabe-filmmaker inside of me, but I always have a soft spot for films that are made by a group of friends with a cool idea, restricted by a minimal budget, and using whatever they have at their disposal to tell a captivating tale. Taking this initiative, writer Makoto Ueda and director Junta Yamaguchi have come together to create a film completely shot on an iPhone, with long, flowing shots edited to look like one long take (ala 2014s Birdman) and utilising only a handful of actors. Japan’s Beyond The Infinite Two Minutes is an incredibly well constructed and immensely enjoyable sci-fi tale that is having its North American premiere at the 2021 Fantasia International Film Festival.

Kato (Kazunari Tosa) is a café owner who also lives in an apartment located a few floors above the café, in the same building. Upon closing for the night and heading home (upstairs), he discovers his computer (which is a livestream of a camera setup in his café) is actually… Kato himself two minutes into the future. What follows is a mind-bending, time-shifting tale of drama, fun and romance as a variety of characters join Kato on his mission to find out what is causing this time anomaly.

The less you know about the entire premise of Beyond The Infinite Two Minutes the better, because the absolute joy this film captures on screen will undoubtedly keep the audience. Establishing relatively simple rules to its ‘sci-fi’ universe is the film’s main strength. It does take a couple of scenes to wrap your head around how the 2-minute time differences work within the story, but once the rules are established, this movie becomes a sci-fi tale that has complexity within its simplicity, both emotionally and scientifically. A lot of care has been put into the intricacy of how the film flows, seeing Kato have a conversation with his future self, only to have that conversation again through a different screen with his past self, within the space of 2 minutes and one long take, is an amazing feat for these filmmakers. But not only that, to have it make sense and continue to be an interesting repetition of these event for 70 minutes is even more impressive!

Tosa as Kato is at the centre of the film’s story as we follow his waving interest and disinterest in the strange event unfolding in front of him, and as the movie slowly reveals his future self’s true intentions, it becomes an incredibly personal story about romance and how even the most abstract moments in life can be tiny compared to the feeling of companionship. While Kato is going through his personal story, the film is accompanied by a hilarious and enjoyable tale of Kato’s friends, who are having the time of their lives trying to figure out more about this time anomaly. Watching them all attempt to trick their past selves or try to capitalise on this discovery for financial gain is consistently amusing, even though the characters motives are more surface level compared to Kato’s, the actors really give it their all to the enjoyment factor of this element of the film.

While the first two acts of Beyond The Infinite Two Minutes are more low stakes and grounded, the finale picks up the absurdity and traditional ‘sci-fi’ aspect of the tone. The story does feel like it suffers from the age-old issue of: ‘how do we end this movie”? While it doesn’t detract from the rest of the preceding events of the film, and still maintains its charming, low budget feel, it does feel a touch out of place. The story does have a constant threat looming over throughout, however that threat is dialed up a lot more, and a lot quicker, than expected, leaving a feeling that the script has rushed to this climax. However, the final moments of the movie bring everything back to a grounded level and finishes on an incredibly sweet note for our characters, but not before a few head scratching moments where the intensity does increase a fair bit.

Beyond The Infinite Two Minutes is the definition of a hidden gem. A simple, yet intriguing sci-fi premise is only uplifted by it’s charming characters, jovial tone and incredible display of low budget filmmaking. This isn’t just one of my favourite movies right now at Fantasia Fest, but one of my favourites of 2021!