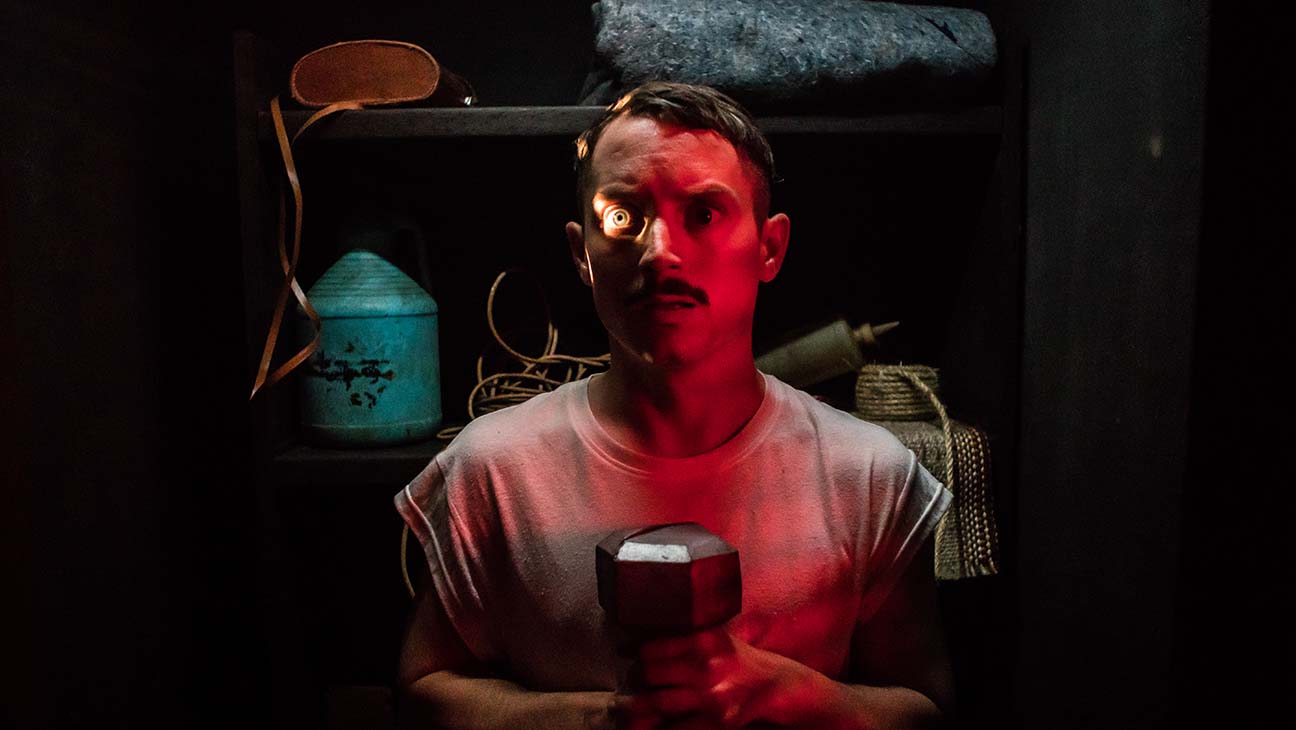 New Zealand producer Ant Timpson has debuted his first directorial effort with black comedy/thriller, Come to Daddy. The film was due to be released globally in theatres this year. However, due to the lockdown laws in place forcing the closure of theatres the world over, Come to Daddy has been released via video on demand through various platforms.

Norval Greenwood (Elijah Wood), a spoilt hipster from Los Angeles, has not seen his father since he was a child. In the film’s opening, Norval receives a letter from his father, requesting a visit at his Oregon home. Norval journeys from the city to a stunning but very isolated clifftop house overlooking the sea. When he arrives, there is an awkwardness with his father that Norval finds unsettling. There are some traits in his father that Norval sees in himself making him determined to impress him and show that he has succeeded in life even without his father’s presence.

Despite Norval’s efforts, things go from bad to worse. After a series of unexpected surprises and twists, we find Norval once again trying to get to know a man he has never known. From here, screenwriter Toby Harvard introduces a completely unexpected and ingenious twist that demands a silencing of further plot revelations.

Suffice to say Norval’s challenge to know more about his father is particularly acute as he learns more about his father’s shady past and struggles to reconcile his desire to connect and help him against his own sensibilities and sense of what is morally right. While it is clear Norval has some serious daddy issues which have influenced his life thus far, he is also torn in the decision to help his father at whatever moral cost and the results of his naivety in trying to do so provide the crux of the humour in this film.

Harvard’s plot twist flips this film towards a completely different direction. This change in course allows for Norval, whose character Timpson describes in his own words as being “entitled” and a “douche”, to be broken down through the course of the film. The journey to Norval’s basest of existence is at times a bloody one, largely a result of his own foibles and misfortunes. But one can’t help but feel empathy for him as he is determined to do right by his father and mother and save his family from dangerous criminals.

Wood depicts his Norval character in textbook fashion using his unique physical attributes (those wide eyes we are all familiar with from his Lord of the Rings days) to his advantage in portraying Norval’s shock, disbelief and fear throughout the film. It allows for the empathy and even likeability for his character to be retained despite some questionable moral choices.

There is much that Timpson is parodying in this film which is designed to make you question or laugh at human relationships – the bond between father and son being the most obvious. We are also challenged by our western attitudes towards death and dealing with grief and the crazy and illogical notions humans associate with such themes when faced with them.

Finally, Timpson unashamedly uses garish and sometimes stomach-churning scenes to emphasise both the desperation and the moral fragility of the human spirit. It’s not a film for the faint hearted and yet a treat for fans of the black comedy genre. At a punchy 93 minutes long, a lot is achieved in a small amount of time and it results in a satisfying and entertaining look through Timpson’s strange and unique lens on life.

Come to Daddy is available now on Video on Demand via platforms such as iTunes, GooglePlay, Telstra, Fetch and Vimeo on Demand.