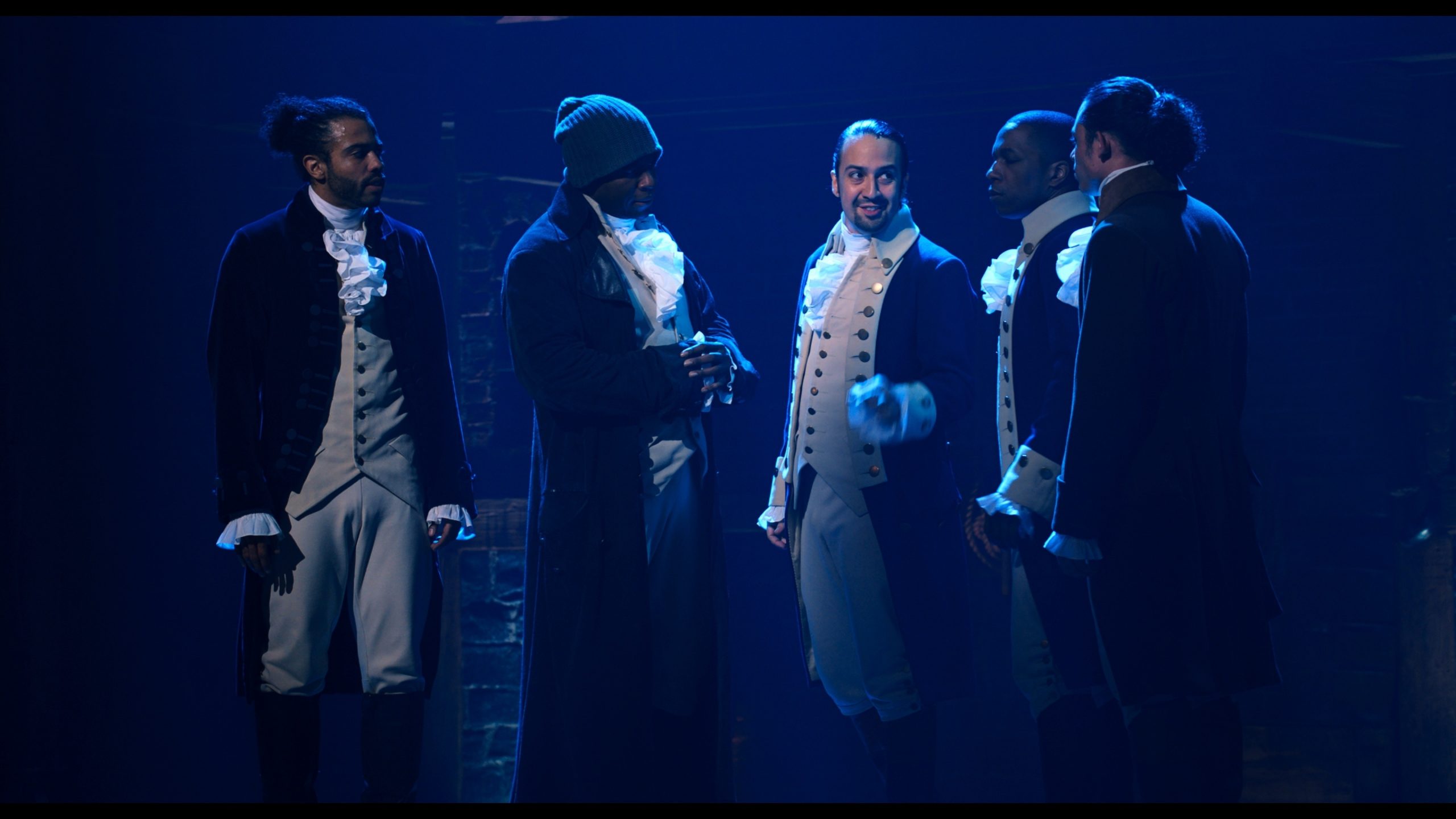 “Head full of fantasies of dying like a martyr? Dying is easy, young man. Living is harder.”

In 2015, Lin-Manuel Miranda’s now smash hit musical Hamilton burst on to the Broadway scene with immensely positive critical and audience reactions. Based on the biography Alexander Hamilton, the story of one of America’s Founding Fathers, Hamilton is a musical that primarily uses a hip-hop score and songs to tell the story. And in the vain of a show such as Les Miserables¸ most of the dialogue outside of the songs is also rapped or spoken to the beat of the music.

Based in the late 1770s-early 1800s, Hamilton follows its titular character (performed by Lin-Manuel Miranda) through key stages in his life. From an immigrant orphan who leaves his home to study in New York City, to fighting alongside George Washington in the Continental Army against England and ultimately becoming one of the most influential voices during the formation of the United States of America.

A special recording of one of the show’s live performances in 2016 was created in New York City and after being acquired by Disney, was intended to be released theatrically in October of 2021. Unfortunately, planet Earth had different plans this year, but in a small silver lining, Hamilton will now grace the “silver screen at home” when it’s released on Disney+ July 3rd.

Ultimately, there are 2 aspects of this release that are to be reviewed. The musical itself and also how the musical has been presented in its digital, non-live format.

Hamilton as a musical is absolutely incredible. The hype is undoubtedly deserved. Miranda has formulated an immersive and engaging look into the story of Alexander Hamilton, with each lyric serving a strong purpose for the story. No scene or song felt like filler, which in turns makes for a fast-paced viewing experience (even considering its 160-minute runtime). A slight critique of this however, because each song is filled with loads of information about Hamilton’s life and the events that he is a part of, the rapid-fire nature of some songs means occasionally information can fly past without realising. This is never a complete detriment to the entire experience as the pacing alone allows for moments to breathe and take in the dramatic elements required to understand and be invested in the relationships, it’s more-so an issue when an entire song is dedicated to things like the on-going war or governmental issues.

A few standout musical numbers are “My Shot” – in which Hamilton meets his revolution-minded college buddies for the first time, the opening number “Alexander Hamilton” captures your attention immediately while setting up the main characters and “Cabinet Battle #1” which leaves one wishing that all parliament based arguments took the form of rap battles.

The set is simplistic with a very 18th century wooden feel, but they way it’s utilised along with the blocking of the performers brings it very much so to life. A constantly rotating centre stage allows the audience’s eyes to be moving around to see action all around. It is deliberate and wonderous immersion into this world.

The use of stage lighting, in particular for the duels and a number with flashbacks to an earlier song, is fantastic. The wonderment of how the lights are used to show different times that events are occurring was astounding to watch.

The choreography is exciting beyond belief. Each ensemble member is giving it their all throughout with such amazing passion, it’s impossible not to almost be clapping and cheering along with the audience in the recording.

Manuel is an obvious stand-out throughout the show. This comes across as a passion-project for him in many ways. The care he has taken with telling intimate details of Hamilton’s life shows his appreciation for this character and the impact he has had on America. Fellow stars such as Daveed Diggs, Anthony Ramos, Okieriete Onaodowan and Jasmine Cephas Jones take on dual roles in this production as one character in the first act, and another in the second as the story continues a few years later. At first slightly jarring, it was amazing to see the distinguishable feature these amazing performers had given to each of their characters.

Diggs is a standout as Lafayette/Thomas Jefferson, he is energetic and entertaining throughout. Renee Elise Goldsberry as Angelica is a powerhouse performance with a beautiful voice and stage presence to go along. And finally, Christopher Jackson gives an emotionally strong performance as George Washington. It’s almost impossible to continue with out giving praise to each person in this cast, as they are all unbelievably incredible, and absolutely worth the time to self-discover (especially a humorous cameo as King George III).

Thomas Kail, who also directed the Broadway run of Hamilton, has directed this feature version. Using a person who already has the knowledge of the emotional beats of the story is a perfect choice because that heart, passion and feeling is felt through the screen. Each shot is crafted to show off the amazing impressiveness of the stage blocking and captures the performance very well.

The finale of Hamilton is edge-of-the-seat nail-biting greatness, which only adds as the cherry on top of not just one of the most amazing musicals created, but also one of the greatest musicals to be captured on film. The only negative to take away from this viewing experience, is that Australia doesn’t get Hamilton until 2021!

You can catch more of Nick’s review here

Like Loading...
Newsletter Signup
In this article:2020 review, disney +, disney plus anz, disney plus review, nick lbarrow
Up Next:

A Call To Spy Review