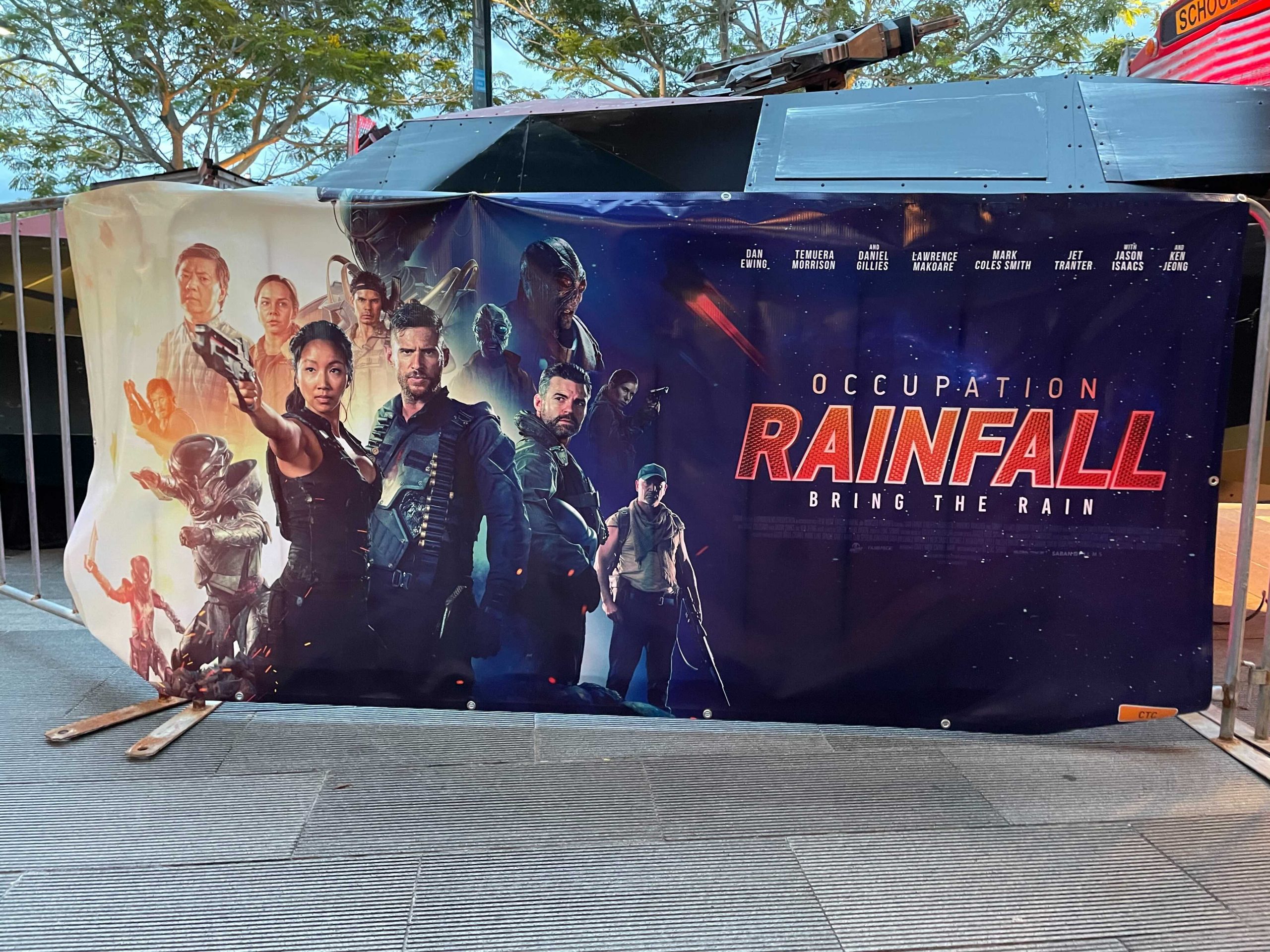 Occupation: Rainfall is the sequel to the hit-Australian sci-fi film Occupation! Before hitting cinemas on January 28th, I got a chance to see the film early and have a chat with writer/director Luke Sparke and cast members Dena Kaplan and Zac Garred about their experiences making this movie.

Q: For a science-fiction film, the first Occupation has an incredible number of practical effects as opposed to visual effects. Is that something you wanted to replicate in Occupation: Rainfall?

Luke: This film had a much bigger scope [than the first film], and when we started breaking down how we were going to shoot a destroyed Sydney, it ended up becoming a lot more work in a studio, like The Mandolorian. We were actually filming this at the same time as The Mandolorian was coming out! We didn’t know this was the technology they were using, so we were kind of doing an Australian knock-off version, I just didn’t even know it! So, it turned out we did a lot in the studio, which means a lot of it is more visual effects rather than practical. But, of course, as much as I can… we made a real ‘speeder’, so I made everything I can as real as possible with the budget we had. When you’re filming with F-18s, well that gets a little bit trickier!

Q: Sci-fi isn’t usually a genre we see pop up much in Australian film. We love making comedies and dramas, but do you feel this is a step forward for seeing more big budget sci-fi coming out of the Aussie film industry? Was that part of your intention making Rainfall?

Luke: Yeah, of course! I really intend to raise the bar of what we can do with an Australian crew and Australian cast, without just becoming the ‘Hollywood backlot’. Which is still great, and we make a lot of good films here [in Australia] that are American, but it would be great to see a lot more movies like this to go along with the comedies and dramas that we do.

Q: The 80s and 90s were huge for sci-fi. Do you think it fizzled out and is now making its resurgence? Have you always been a die-hard sci-fi fan?

Luke: I’ve been a die-hard, and I think sci-fi has always been there. And I’ve always wanted to make sure the next generation can hear an Australian accent in a big movie like this, which is another reason I went with such a large scale this time. It’s always been there, like Star Wars has been around still. Whether you like the latest Star Wars is a different question. The Mandolorian is great though!

Q: This movie is definitely a little different to the other projects in your career, right?

Q: You get the script, you have spoken to [writer/director] Luke – what was the first thing you worked on for the role?

Dena: The first thing I did was research everything I could about fighter pilots. When I read the script and did the audition, there was so much lingo I didn’t understand. 80% of what my character says, I didn’t know what she was talking about because it was ‘pilot lingo’, so I did a lot of research on that. And I watched a lot of Michelle Rodriguez in Avatar, because that’s my girl!

Q: Are you a sci-fi fan yourself?

Dena: I can’t say I’ve spent too much time watching sci-fi, but I definitely appreciate all genres.

Q: I can imagine film sci-fi would’ve been a different experience?

Dena: Oh, it was a dream! I’ve never done green screen before. So to actually be in one [a sci-fi movie] was amazing.

Q: Obviously, it’s been a weird last 12 months with films and cinema. How does it feel having a movie that is this big, made in Australia, coming to Australian cinemas?

Dena: Absolutely. I think it’s such an important time to, you know, not only for Australian film, but to celebrate film altogether. Heading back into the beautiful ritual of going to the movies, with some popcorn and escaping into that experience, and I think we all need a bit of escapism at the moment.

Q: You’re back for the sequel! What was the expectation you had after reading the script in regard to levels of scale and excitement?

Zac: It’s exactly what you’re going to see on the screen. Everything we read on the page has translated very, very well to the screen. That’s just a reflection of the capability of Luke as a director, the producers and the wonderful cast. Everything on the page was just as evocative on the set. I was asked what it was like working on the green screens, and honestly I forgot they were even there. The direction was so clear, the environment was so immersive, our job was easy!

Zac: Immediately, Mad Max and Star Wars. Two obviously iconic films of the genre. I think Rainfall has the galactic size of Star Wars, but it has the personal connection and the dystopian side and thrill of Mad Max. In a way, I think that’s a wonderful nod to sci-fi as a genre.

Q: Speaking of sci-fi as a genre, do you see Occupation: Rainfall being the film to not just put Aussie sci-fi on the map, but become the resurgence for the big blockbuster movie in Australia?

Zac: I would love to see that. Obviously, with the tragedy that’s currently unfolding worldwide, there is a gap in the market. And it’s delightful to see our voice and our stories, and this incredible and imaginative production filling that summer tentpole gap, literally a summer tentpole! It’s sort of funny when you look at Event Horizon where Sam Neill plays an Australian or Edge of Tomorrow, Kick Gurry – he was the Aussie in that! Whenever we have these futuristic films, there is always an Aussie somewhere in there. Snowpiercer! Aaron Glenane plays ‘The Last Australian’. It’s kinda cool as opposed to being a part of the ensemble, we’re creating the story.

Occupation: Rainfall is in cinemas January 28th and you can check out Alaisdair’s review of the movie here.