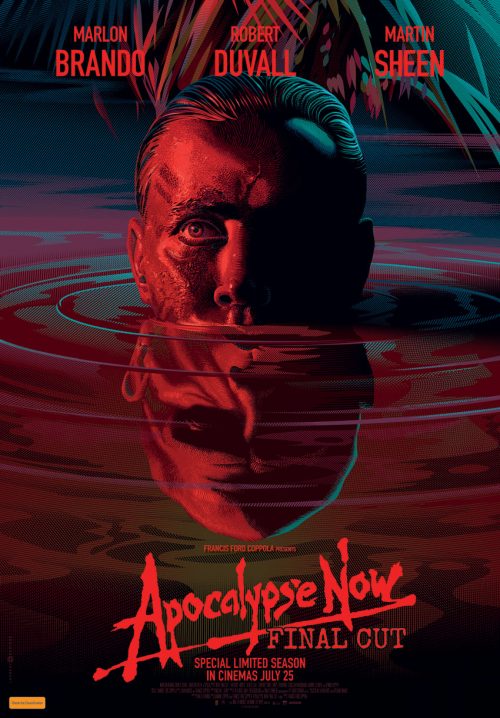 I’m going to be honest here for a second and let you know, I’ve never watched the original version of Apocalypse Now. Watching Apocalypse Now: Final Cut – the version director Francis Ford Coppola always wanted to make – seemed to be a great opportunity for me to experience this classic on the big screen.

This year marks the 40th anniversary of Apocalypse Now. Rereleased in 2001 as ‘Redux‘-version, ‘Final Cut‘ cuts down to a three hour running time and uses state-of-the-art Dolby Atmos sound and crystal clear 4k restored imagery. Every scene got polished and feels and looks like a new film. Coppola seems to be saying goodbye to his magnum opus with this final cut, showing us exactly the way he wanted Apocalypse Now to look like in the first place.

The opening shot of palm trees turning into ashes, to the sound of The Doors‘ “The End” is burned into my mind. Just beautiful in every way. This image might not look as hi-def as you’d hope for in the final cut, but this has to do with the way it was shot on celluloid. Nonetheless, gives you an idea what awaits you. Helicopters and motel-room ceiling fans edited in a way that it overlaps, shows how affected Captain Willard (Martin Sheen) is by this war – PTSD shown in the most artistic way.

Where the first two acts are really compelling, the final act really lost me. The first two acts explore post traumatic stress syndrome and the challenges that come with it. The Vietnam war is still roaring in the background, but our main group of characters is put on a side mission upriver, to hunt down a deserter – demented colonel Kurtz (Marlon Brando). The Captain reads through Kurtz’s files while traveling through Vietnam, danger luring around every corner and trying not to lose focus on his goal. This war changed many men forever. Coppola and his team show the insanity in the jungle and trenches, while these soldiers have nothing else to lose than their minds.

The final act starts with a very strange scene at a plantation that has nothing to add to the story. Here we get seated around a dinner table with French colonialists discussing politics, that seems to go on forever. To then move further down the river to introduce Brando’s character in a cultish way. This third act feels like a different film and to me was very anti-climactic. That doesn’t mean this film isn’t a masterpiece, because the work and practical effects put into the making of this is simply astonishing. Watching Robert Duvall act for his life, was jaw-dropping and made me smile every time he appeared on screen.

I’ve never seen anything like Apocalypse Now: Final Cut before, and I don’t think I’ll ever see anything like this ever again. StudioCanal decided to distribute this new version in Australia. If you get the chance to watch this on the big screen from Thursday July 25 (in selected cinemas), please do, you won’t regret it!

Apocalypse Now: Final Cut is rated MA15+ and will play in select Australian cinemas from Thursday:

Review – Sequin in a Blue Room