Oscar winning filmmaker, Damien Chazelle, has described his latest cinematic venture, Babylon, as a “hate letter to old Hollywood”, but also a “love letter to cinema”. And in all honesty, it is the perfect summary of the atmosphere in his latest film, a 3-plus hour long epic that takes a gritty and thoroughly energetic look into the transition from the silent-era of filmmaking into the ‘talkies’, and the effect it had on the stars and the industry at that time.

Having audiences in awe of his previous work, Chazelle takes the relentless energy of Whiplash, and dashes on some of the romance and cinematic magic felt in La La Land to navigate this era of old Hollywood. The story of Babylon is told through the lens of three characters. The first introduced to audiences is Manny Torres (Diego Calva), an ‘assistant’ of sorts to a big time Hollywood producer. And by assistant…. well, let us just say that Manny’s job can get real ‘shitty’ at times.

At a lavish and excessive coke-fuelled party hosted by this big-time producer, Manny meets Nellie LaRoy (Margot Robbie), an ambitious and confident (and drunk, and high) woman who dreams of being a star. Not necessarily an actor, but definitely a star! As she crashes and stumbles her way into the party, Nellie shares her dreams with Manny, lighting a fire inside them both to do whatever it takes to become something in this hell-hole of a town!

Arriving fashionably late, in style, and potentially leaving a new ex-wife behind, is the biggest silent film star in the entire world, Jack Conrad (Brad Pitt). Oozing swagger and style, Jack can barely get a step through the door before he’s swooned upon by women and hawked by producers and directors dying to work with him. Yet still, within all the hubbub, blaring jazz music and utterly insane atmosphere of this debaucherously alcohol and drug fuelled bonanza, Jack still manages to find his way to a quiet corner, order himself a laundry list of booze, and write himself off for the night.

And with the magic of Hollywood all around, the stars align for the dreamers as Nellie, due to an overdoes and her ferocious dancing impression left on the partygoers, lands her first starring role. Then, with a barely coherent Jack Conrad unable to drive himself home, Manny is tasked with the duty of making sure Jack’s arrival home is swift and secretive, putting him in the good graces of Jack, who makes Manny his new assistant. Life seems grand when you’re at the top, but as all three soon find out, this town will chew you up and spit you out just as quick as you came into it. 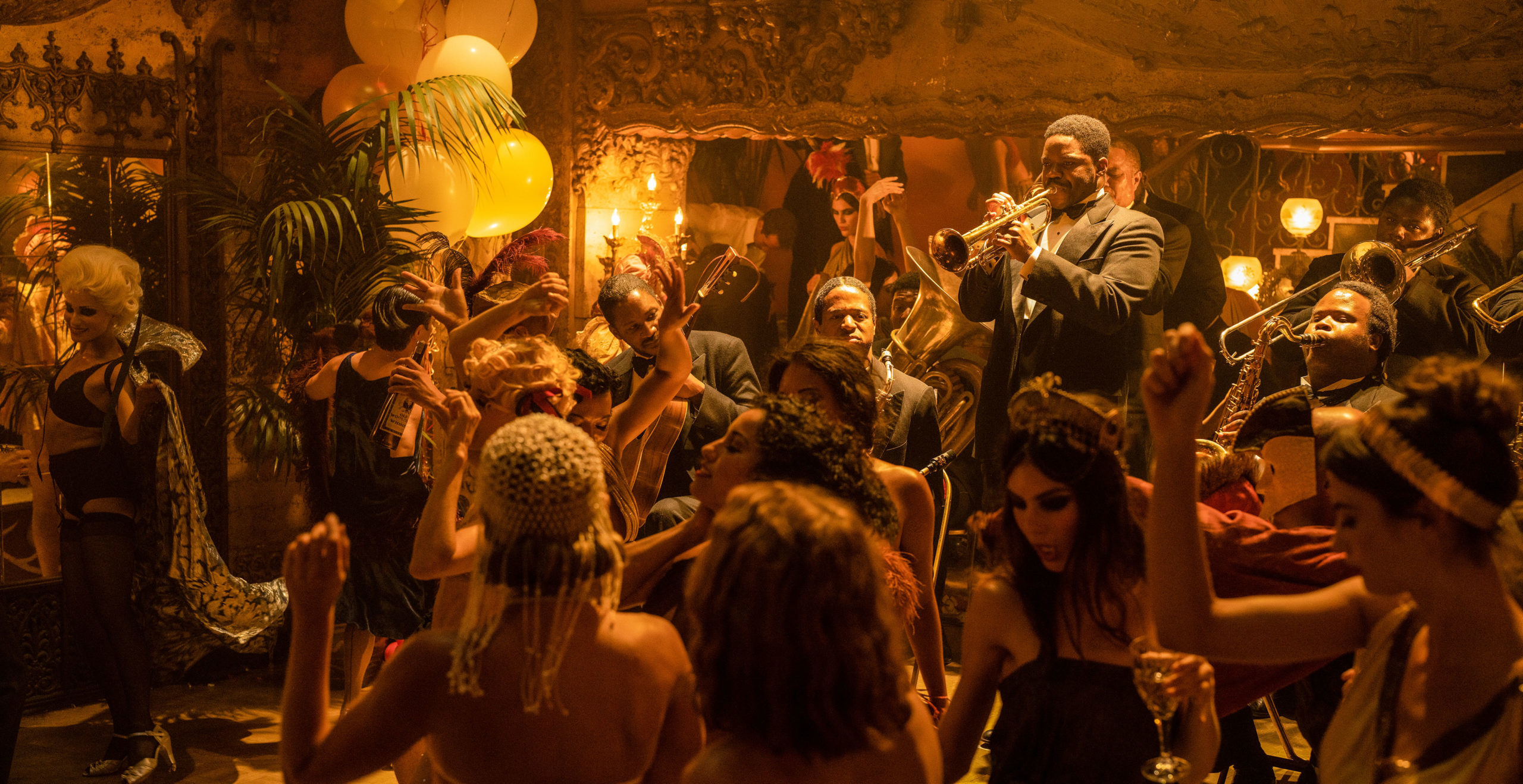 Chazelle’s energy for the majority of Babylon is chaotic and frantic, but it is so much damn fun! His ability to keep a movie of this scale, both story wise and literally with it’s incredible set design, firing on all cylinders can only be compared to the feeling of being on the great cocaine binge. Every time Babylon feels like it’s going to slow down, Chazelle gives you another hit, and the insanity just continues to reel your engagement back into this world.

The way the camera moves around these gigantic party scenes is outstanding. Using his signature long-shot takes, Chazelle throws the camera in all directions, making sure every sick, depraved, little detail is caught on screen. On top of that, Justin Hurwitz’s bold, brash and brilliant jazz-centric score creates a beat and rhythm to the film, assisting in moving along it’s 3 hour runtime with break-neck speed. When that score blasts through the cinema speakers, and the camera whips around a scene, it’s impossible to not get caught up in the excitement of it all.

That energy is only exemplified by Margot Robbie’s purely electric performance as Nellie. The fast talking, eyelid flattering, taking no prisoners New Jersey gal. Robbie commands the attention and she steals every scene she is in. The manic nature of Nellie, from her opening moments, all the way through her transformation into a ‘star’ is far from grounded, and that is the point Chazelle’s script is trying to make. There is nothing normal about the life Nellie’s lives within the walls of Hollywood, Chazelle’s modern day equivalent to the old biblical tale of the depraved city of Babylon.

A scene that takes place a few years into Nellie’s career (and arguably one of the best scenes in the film)showing the introduction of sound recording in movies, hilariously and terrifyingly depicts the working conditions on those sets. The blinding lights producing heat on set that has no open doors or windows as they will affect the sound. Directors, producers and sound recordists ready to kill each other over technicalities while cameramen suffer in a closed wooden box because the rolling of the film can be heard on the microphones, all while Nellie struggles to remember her lines because this is the first time she’s every had to talk on a film before. So much is happening, and so many characters yell over each other in a scene that is so anxiety inducing, but absolutely hilarious, is the epitome of Chazelle’s feelings about this era of Hollywood – cinema is truly magical, but the environment that it was created in is deplorable.

When the morality of characters, especially Manny as he rises through the ranks of Hollywood, is put in to question when the deplorability becomes unavoidable, it is a fantastic insight for audiences who may think being a star in the pictures, or being the people behind getting them made, is all glitz and glamour, when it couldn’t be further from the truth. And while this is a critical point of view from Chazelle, there is still this unfiltered, passionate love for the art form that comes across on screen. There a plenty of scenes and moments of films being made or watched in which Chazelle captures the love for cinema in it’s purist form. The boldness of Babylon’s closing moments especially was crafted by a film lover, for film lovers. And this film, even when it’s showcasing the worst of humanity, never loses that focus.

In his first American production, Diego Calva shines as Manny. Manny is probably the most down to earth character in this unworldly universe, often acting as the audience’s point of view for this story. The underdog spirit of a man who beings the film at the lowest point, and seeing his rise makes Manny a wonderful character to follow, and Calva relishes in that spirit.

While a lot of Babylon’s humour does come from the insanity of… well, everything, Brad Pitt brings that charming win in spades to his portrayal of Jack Conrad. It’s a role that seems like only Pitt could play, with the beautiful subtle mix of Pitt’s self-awareness and pure Hollywood stardom and sex appeal. Sure, at times it can feel like Pitt is playing Pitt, but there is an empathetic angle at play within this character that could only have been pulled off by one of the biggest movie stars working today. A pure standout in the limited scenes he’s featured in is PJ Byrne, who has a key role in the aforementioned ‘anxiety inducing’ moment that is so insane and intense, that nervous laughter will overcome the soul. Babylon is a big movie. It has big stars covering a big story that takes place during a big time in Hollywood’s history. The tone is big. The atmosphere is big. The music is big. The sets are big. The energy is big. And at times, Babylon can feel like a lot, especially with its frantic and chaotic nature. At times, the story goes in completely unexpected directions (just wait until Tobey Maguire hits the screen), and there are some disjointed elements that don’t always narratively mesh. Plus, it’s impossible not to point out the graphic nature of this film. Drugs, sex, nudity, violence, swearing and every (literally, every) bodily fluid (both human and not human) is on full, unapologetic display. Some audience members won’t like it. But, if you take Chazelle’s outstretched cinematic hand, and let him take you on this wild ride, the pay off is absolutely worth it, because quite frankly, they just don’t make movies like this anymore!

Babylon is in Australian cinemas January 19 courtesy of Paramount Pictures.

Oscar winning filmmaker, Damien Chazelle, has described his latest cinematic venture, Babylon, as a “hate letter to old Hollywood”, but also a “love letter to cinema”. And in all honesty, it is the perfect summary of the atmosphere in his latest film, a 3-plus...Review - Babylon