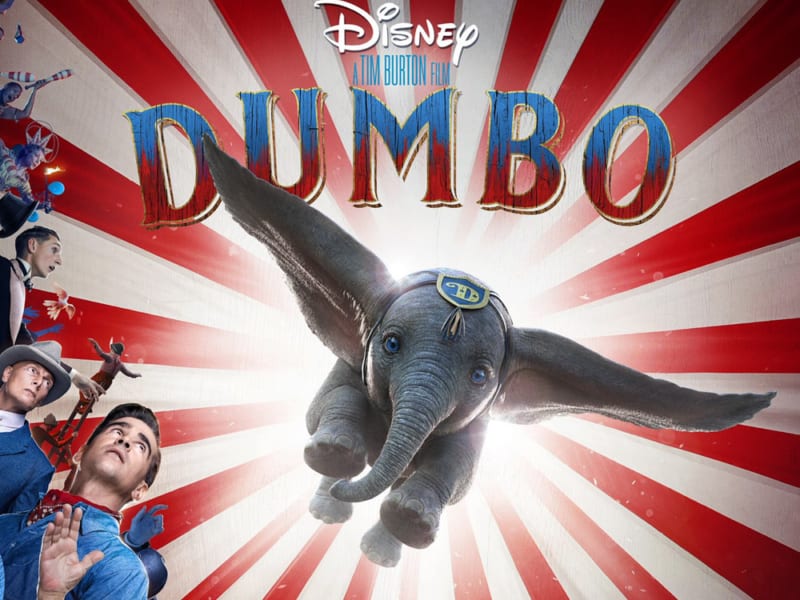 The live action Dumbo is an ambitious attempt to recreate a classic beloved film. But did the movie succeed in bringing one of Walt Disney’s first animated feature films into the 21st century?

The story begins around the same era that its animated predecessor was released. Holt Farrier (Colin Farrell) has returned from war to find his home and circus on the brink of bankruptcy, his act disbanded, and his children having lost a mother. In an attempt to save the circus, the ring master Max Medici (Danny Devito) purchases a pregnant elephant but is disappointed with the birth of the wing-eared Jumbo Jr. After a deathly performance under the big top, Medici brashly gets rid of the mother elephant and puts Jumbo Jr., now dubbed Dumbo by locals, into the care of Farrier and his children Milly (Nico Parker) and Joe (Finley Hobbins). But through the care from the Farrier children and with the promise of finding his mother, Dumbo becomes a star attraction beyond his humble circus.

Due to the financial loses from Disney’s Fantasia, the original animated film was deliberately designed to be simple and became one of the shortest animated features from the studio. But now with Tim Burton in the director’s chair, the studio certainly did not have the same restrictions.

The visuals were extravagant and designed with the usual Burton flare. This aesthetic becomes more powerful as the story moves beyond the circus tent to a city theme park I would liken to Tomorrowland. In fact, a lot of the theme park reflects Disneyland and Disney World to the point where the movie actually looks to make fun of its real-life counterpart.

It’s a strange juxtaposition as the theme park is home to the story’s true big bad, the malicious and greedy V.A. Vandevere (Michael Keaton). As the story moves to the park, there’s a sense of unease and the audience immediately knows something foul is afoot. But it also holds the scene I most enjoy.

The original circus crew joins together for what seems to be one last time in order to do a ‘jail-break’ of sorts. They venture to the park’s scariest corner which is filled with terrifying creatures in enclosures and, to confuse the park guards, they turn off the lights and let smoke machines run. The guards almost run in fear from the crawling creature shadows and howling monstrous growls. But it’s all revealed to be the crew in costumes casting the shadows and one fella with a megaphone!

It’s entertaining, childlike , and reminiscent of Disneyland rides. But for the park to be so like Disneyland yet tarred with the brush of greed and consumerism makes the similarities very uncomfortable. Although, after Burton’s history of animating for the studio, it can also be seen as comical.

Unfortunately, this feeling of uncertainly traipses throughout the film. No actor makes an outstanding performance, with lines mostly falling flat or being overly dramatic. The story was either rushed, as it was in the introduction and finale, or dragging with little to no spark to keep the audience drawn in to its elongated story.

And a lot of this can be forgiven when a movie has a clear audience. Although the 1941 Dumbo is not an animated feature I could claim as a childhood classic for myself, there was a certain element of childhood wonder that this remake failed to carry across. And with the missing or changed tunes, I can’t see this movie being made for the nostalgic generation.

As for younger audiences, Burton’s Dumbo relies too heavily on the scarier visuals. In one said scary moment, a child in front of me stated he didn’t like the film and that he wanted to leave. Another child, frightened by some element later in the film, screamed and took some time to calm. So, I can’t claim that this movie is for children either.

There’s a certain heart that classic Disney films have. It draws on the significance of family, self-value, and genuine kindness. Those stories, aesthetics, soundtracks, and voice acting always pulled together a professional and seemingly effortless orchestra that could wow audiences from dummies to dentures. Although Dumbo shows the significance of family, self-value, and kindness, there’s a genuine heart missing from its medley.

Tim Burton’s Dumbo ambitiously strived to take on one of Disney’s shortest animated feature films and turn it into a larger than life story that stretched beyond the original material. It’s not a story that will satisfy the long-time fans, nor is it a movie that is wholly appropriate for younger viewers. There are moments reminiscent of the original animation and Disney theme parks, but not enough to make it a film worth the cinema admission. So, it’s with a heavy heart thatDumbo gets 2 Novastars out of 5 from me.