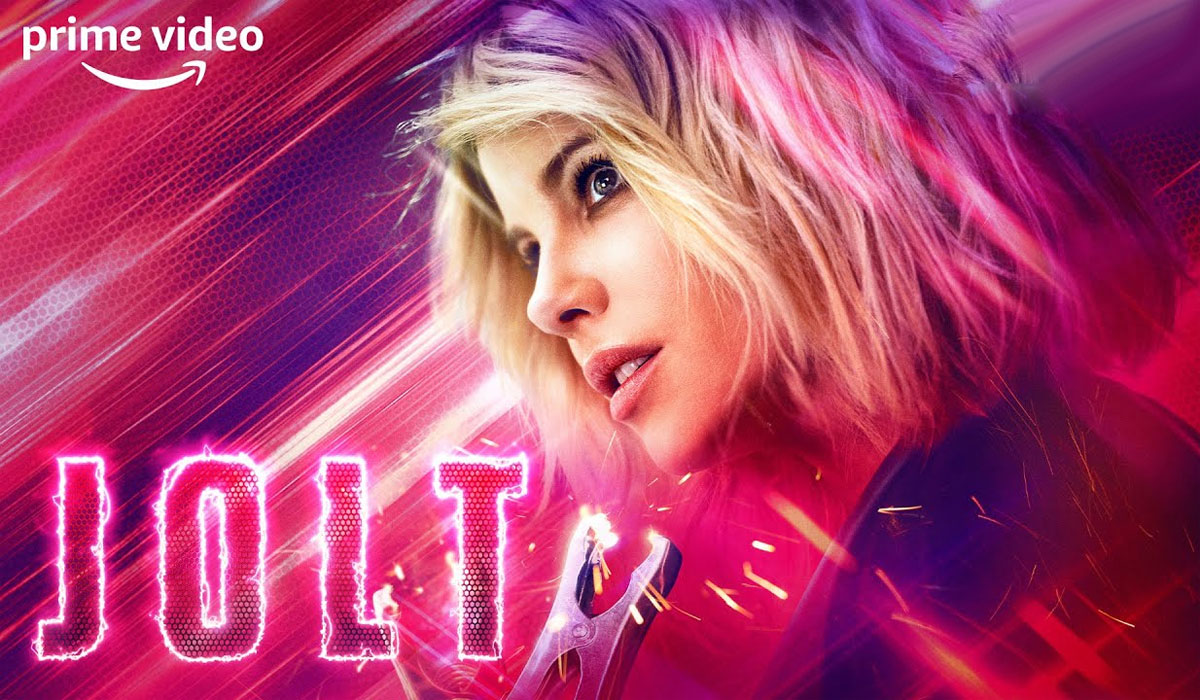 Lindy has some anger problems. From a young age, she’s had uncontrollable urges to commit violent acts on to people who make her angry. Too some extent or another, I’m sure we can all relate to that… maybe not to the violent extremes that Lindy has gone to deal with her anger, but people pissing you off enough that evokes a physical reaction. Unfortunately, for Lindy (Kate Beckinsale), it’s taken over her life enough that she wears an electrical-shock suit underneath her closing, that at the push of a button, self-inflicts a jolt that stops her rage-filled urges.

Now in the new Prime Original, Jolt, Lindy finds love for the first time in forever with Justin (Jai Courtney). Justin is the first person to make Lindy feel less homicidal, in a healthy way that doesn’t require her to electrically shock herself. However, one night Lindy is called into a police station to find that Justin has been murdered in what seems like an intentional assassination. Deciding to let her murderous inhibitions fly, Lindy sets out on a warpath to find those who are responsible for her new lovers death.

Jolt’s main strength lies in Beckinsale’s performance. Donning her traditional British accent and a ‘zero-f*cks-given’ attitude, Lindy is an extremely entertaining powder-keg in this movie, and Beckinsale is having an absolute blast playing her. Every witty insult that comes out of Lindy’s mouth garnered a laugh out of me and I really enjoyed watching her characters progression throughout the story. On top of this, her chemistry early on with Courtney is actually quite engaging. Justin is just an everyday, normal guy (and a bit of a sweetheart), and both actors play the ‘opposites attract’ scenario incredibly well together.

This movie also moves along at a break-neck speed. Clocking at just under 90-minutes, the script written by Scott Wascha (in his screenwriting debut) wastes no time. We get the gist of Lindy’s condition candidly early on, we spend the first act falling in love with Lindy (and Lindy falling in love with Justin), then from there it’s a funny, fast-paced thrill ride right until the end credits. Utilising a basic story and plot points undoubtedly helps Jolt with its enjoyment. No scenes feel bogged down or unnecessary, creating a smooth flowing narrative.

Even though it’s been marketed as an action-comedy, Jolt is a little light on action, but that is far from detrimental. When the violence is on screen, helmed very competently by director Tanya Wexler, it’s used for brutal effect rather than excitement. Don’t get me wrong, the fight scenes towards the end are cool to watch, but it’s also refreshing that Jolt didn’t feel the need to be overly action heavy to be entertaining, because Beckinsale is definitely that on her own!

Jolt does lose a bit of traction towards the end when it becomes a little bit more insane that it probably should’ve been. The story becomes slightly convoluted when a character twist is revealed, leaving me scratching my head a bit as to whether it was a necessary addition or not. The attempt at making a full circle story was the intended decision on this twist, trying to wrap up the movie with a suspense filled finale (and a somewhat unnecessary hint at a sequel). However, it doesn’t detract from the incredibly fun 80-minutes that preceded it.

Jolt is a great Friday-night streaming option. Beckinsale is having so much fun on screen, and that fun makes for a very enjoyable character to follow through a kick-ass, fast-paced thrill ride.