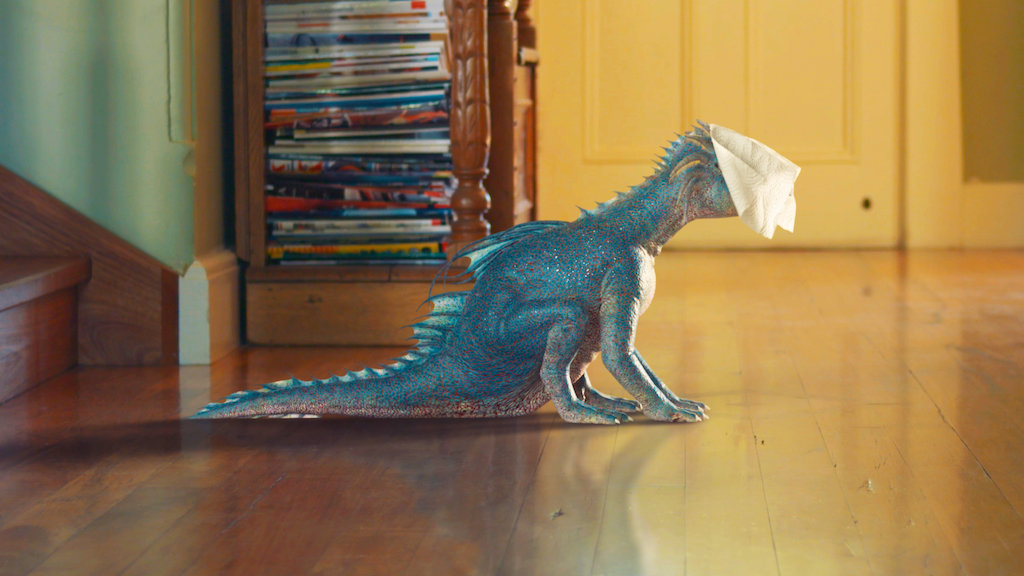 A few weeks ago I was reminded of the beauty of family filmmaking when I re-watched two classic movies from my childhood. E.T : The Extra-Terrestrial and The Goonies. Both of these films took me back to a time when life was simpler, lollies were plentiful and family movies were magic without needing to resort to being dark or edgy. When I sat down to watch My Pet Dinosaur those feelings of family friendly and quality films was restored and while you may not have heard of this film before reading this, if you are a lover of quality Australian films that anyone in the family can enjoy, then My Pet Dinosaur is for you.

The film follows a boy named Jake (Jordan Dulieu) who along with his friend Abbey (Annabel Wolfe) find some protoplasma like goo that accidentally creates a dinosaur like creature. The creature (Magnus) grows at an alarmingly high rate and becomes more difficult for Jake to hide from the town and military. While the premise of the film is quite Spielbergian, the closest thing I could link it to is 2016’s brilliant Pete’s Dragon (one of my favourite films of 2016) and while this does have all of the beautiful E.T and Goonies 80’s feel-good ingredients, writer and director Matt Drummond keeps it in the current age and this helped connect the story with younger kids watching.

If you had told me that this film was made in Lithgow I wouldn’t have been able to tell, the entire town is transformed into a fictional town in the U.S.A called Brightwood. Lithgow’s glow worm cave provides one of the most magical moments in the movie, while the national parks and Wentworth Falls showcase the natural beauty of this area of the world. While the setting felt very U.S.A, it has a very unique and individual look and style that pulled me into this universe and helped me believe it. Visually this film is stunning, the CG work on Magnus (particularly baby Magnus) is Hollywood standard and for an Australian production provides the best visual effects used in an Australian film to date (a REALLY big call but completely warranted!) Another tough part of a filmmakers job is blending CG with real backgrounds without losing the quality. My Pet Dinosaur nails this everytime and by making Magnus emotive the film succeeds in creating a digital creature that you can attach yourself to.

Overall My Pet Dinosaur is a masterpiece in family film-making. With so many Australian films aimed at horror or drama audiences, it is so good to see something made that the whole family can enjoy. The acting by the young stars is exemplary and this combined with the beautiful special effects, you get the feeling that this film has a whole lot of love and passion behind it. Creating an engaging and beautiful CG creature is no easy feat and Matt Drummond and his team have excelled at this. My Pet Dinosaur is an astonishingly beautiful Australian family film and is the perfect way to treat your family. It is not often we award a film 5 stars, but this film shines above the rest in the family film category and we can’t wait to watch it again.

My Pet Dinosaur is showing in selected cinemas now