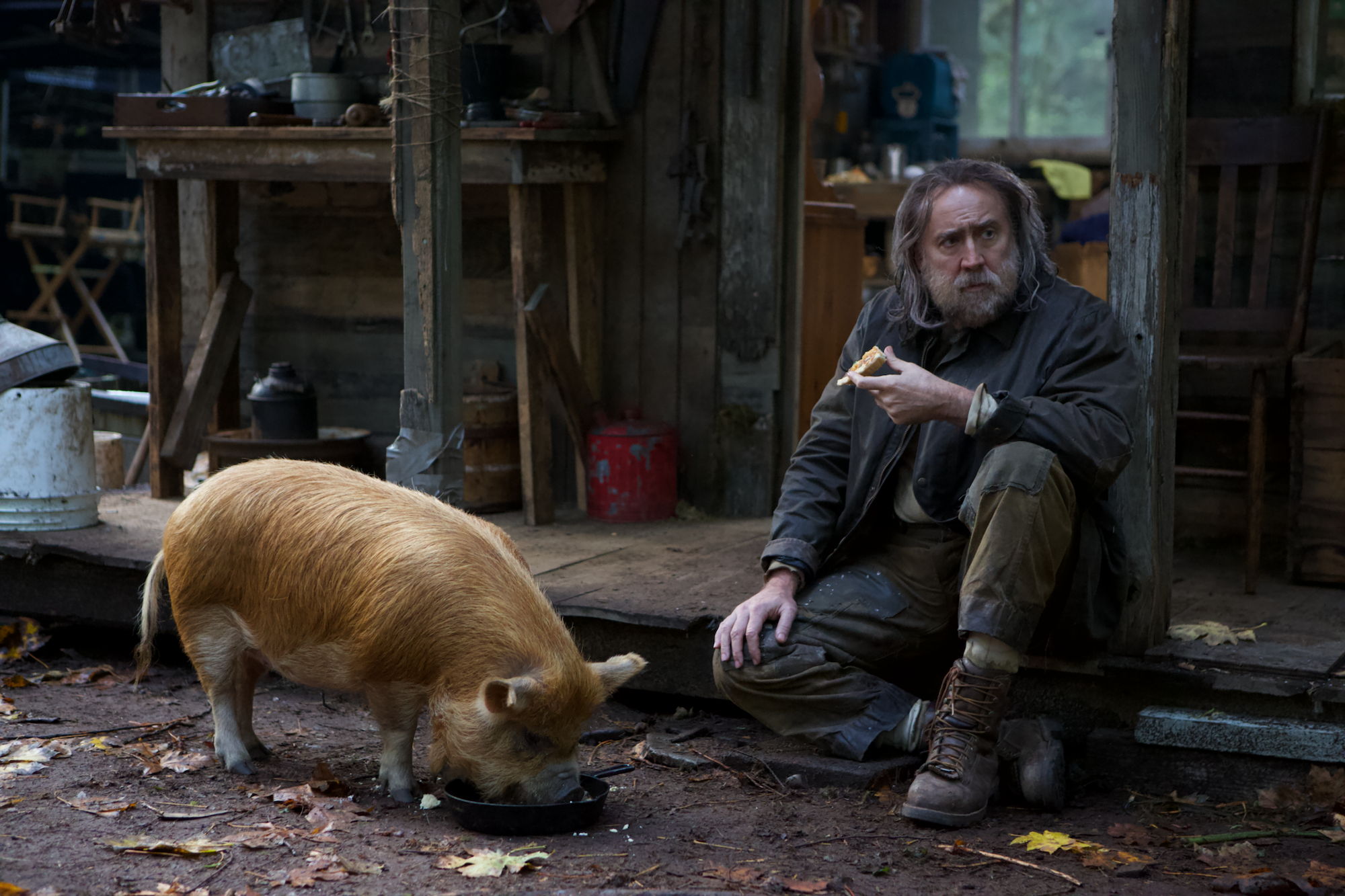 One of the best films of 2021 has landed in Michael Sarnoski’s Pig. This is a powerhouse of a film where restraint and reflection comes out on top of what may seem, at first blush, to be a journey of revenge and savagery.

Pig stars Nicolas Cage as Robin “Rob” Feld, a reclusive man with a past who appears to have turned his back on society and instead live a rudimentary and isolated lifestyle in the thick of an Oregon forest with his sole companion, a pig. Together they forage for truffles which Rob sells to Amir (a brilliant Alex Wolff), a young providore supplying high-end ingredients to restaurants in Portland. Interestingly, Rob seems to sell the truffles in return for basic food staples and other essentials such as batteries rather than cash. Amir appears  to be Rob’s only contact with the outside world, and, even then, Rob is a man of few words. He comes across as antisocial and a grump, even rude to some extent.

Rob is shown to lean heavily on his pig for companionship. They complete a familiar daily routine and Rob cares for his pig in providing for her amidst his quiet and seemingly content life. There is however a hint of sadness or perhaps something amiss when he plays a tape recording of a female voice speaking to Rob.

The serenity is jolted one night when Rob’s pig is forcefully taken in a bloody scuffle leaving him  injured and shaken. He chooses to leave his home in search of his porcine companion and calls upon Amir to assist him in his journey back to Portland where he believes he will find the answers to his pig’s whereabouts.

And so begins the next chapter where Rob’s past is slowly unravelled as he visits places from a previous life, one after another. As Amir is slowly discovering more about Rob’s past and who he is, so too are we and, as with Amir’s preconceived notions of who Rob is, our own judgement and presumptions are slowly vacated for a new understanding of our protagonist. Rob has an appearance of someone out for revenge and the tension that is apparent in his desperate search is surprisingly restrained throughout. At any minute it seems as though Rob will lash out and hit someone or smash something. And yet, he does not because it becomes evident there is a lot more to him than his physical appearance. As these layers are exposed, Rob undergoes a process of reconnection and healing with his lot in life.

The outcome of his search for his pig and his meditation on his past is a visceral experience. It really is a credit to Cage’s outstanding performance that Rob’s inner turmoil is brought out so effectively. One might say Cage’s star has always been in the ascendant, but this performance may just be the actor  at his peak. Cage’s more recent roles have seen him in various states of rage – hence the term Cage Rage. But Pig changes all that. There is no Cage Rage here – just a layered maturity and temperateness that only comes with wisdom. There is no doubt Cage should be acknowledged in the coming awards season with this performance. He is a joy to watch.

Supporting Cage throughout is an outstanding Alex Wolff in his portrayal of Amir. Amir’s agreement to assist Rob has resulted in an unexpected personal journey of his own where he is forced to deal with his relationship with his father and his understanding of what it means to love. Indeed, Amir’s growing awareness of Rob’s journey provides the vehicle for his own enlightenment.

While the premise is fairly simple director Sarnoski and his co-writer, Vanessa Block have scripted a story that manages to achieve an emotionally charged journey of loss and love which is delivered with a gentle harmony that is sheer poetry. Pig is not without its flaws, however. There are some plot holes, some minor editing issues and a few obvious questions which are left unaddressed. This may prove frustrating for some as those questions could have been easily answered with the same sensitivity, poignancy or emotion that other revelations are dealt with in this film. For others though, Cage’s transfixing performance and the focus on this singular journey is enough to ignore such quibbles or questions for another time. Perhaps that was the intention even – to explore the significance and beauty of a single moment.

Despite its 92-minute running time, the pace seems surprisingly gentle and calm and the film manages to pack some emotional and profound punches. Alexis Graspsas and Phillip Klein gift an engaging score which captures the beauty and serenity of the forest and juxtaposes it against Portland’s dark underground culture and its gentrified fineries of haute cuisine. Together with the use of focussed camera and lighting work to enhance the depth and emotions of the moment allowing Cage to express his art with minimal voice, Pig is a film that deserves attention.

Pig opens in cinemas in Australia from 16 September in states and regions where cinemas are permitted to be open.