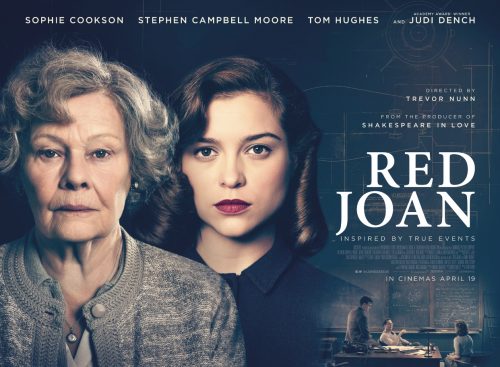 The events in Trevor Nunn‘s adaptation of Jennie Rooney‘s novel, are very loosely inspired by a true story, about the 87-year old Melita Norwood being accused of decades of treason. We get to discover her motivations behind the crime, when Judi Dench‘s character tells the story and we go on a journey of flashbacks with younger Norwood (played by “Kingsman” actress Sophie Cookson). The entire film is a colourless espionage romance that focuses more on the flashbacks than on Judi Dench drinking tea from a Che Guevara mug, which is one of the only real highlights of this film.

Cookson, playing our lead character’s lovey-dovey younger version, is channeling Keira Knightley and does her best with the material given to her. She never really gets a moment to shine as a strong female, but is always stuck in between her male counterparts who are solely here to diminish Joan’s knowledge and to get her heart beating faster as soon she gets too close to them. As character development goes, I couldn’t believe one second that young Joan turns into Dench’s version.

After doing some research on Norwood and finding out that her 40-year spying career has been watered down to almost inexistent for the big screen, it made me realise that the real story would’ve been a lot more captivating. Instead we get a “spy” that’s mostly seen typing. This naive version attends Cambridge University and is supposed to be a brilliant physicist – not that they spend any time on showing us that at all. At Cambridge she meets the Russian Sonya (Tereza Srbova), spy genius covered up as after-dark-party-girl. Their only interactions are about men or fur coats, but at least there’s another female character in the midst of the mostly male cast. Via Sonya, Joan attends her first political meeting, where she falls for the charms of communist Leo (Tom Hughes). He will be the one to light a fire underneath her, for getting all the intel from Joan’s new workplace – a British wartime research unit dedicated to developing an atomic bomb.

When bombs are dropped on Hiroshima and Nagasaki, Joan decides to commit high treason by sharing engineering blueprints with the Soviets via Sonya and Leo, believing that if the USSR was also in possession of a bomb that would’ve been the only deterrent to further mass slaughter. Spy cameras in secret compartments of handbags and a locket which hides a curare-dipped needle, just in case of a “suicide-emergency”, don’t suddenly change Joan into the lethal spy the movie title is trying to sell you, but feels more like a knock off Red Sparrow who’s too goody two shoes to be taken seriously.

Red Joan is a bland version of the real story and could’ve benefitted from a little bit more Judi Dench in the now, than her flashbacks. Now this seems like a waste of talent and feels more like something you would leave playing on mute in the background, when granny talks about the good old days over a cup of tea.

Red Joan is playing in Australian cinemas from Thursday June 6.