Suffragette, directed by Sarah Gavron, follows the suffragette movement in Britain during the early 20th-century, which saw women fighting for their right to vote. Fueled by the terrible working and social conditions of the time, Maud Watts (Carey Mulligan) joins a group of women determined to change the laws in order to gain equality. Brought together by Emmeline Pankhurst (Meryl Streep), these women risk their jobs, families and even their lives for a cause that could finally end the oppression countless women have to live through. It’s a heavy subject that demands attention yet the story ultimately feels too watered down.

There has been a sort of resurgence, or rather a focus, on feminism lately, particularly online. A lot of it has been quite misguided (just look at the way ‘meninism’ has been presented) but overall it has brought up some important points. This movie tries to bring some history and its significance to modern audiences. The issues women faced in the 1920s are not unlike the issues women face today. Equal pay for equal work, sexual harassment, right to self-autonomy, and family laws have come a long way yet they still need some work. So while this movie is “important” in showing the unfairness women have overcome (arguably to an extent), the execution of the story and portrayal of historical moments and figures are not particularly impressive. 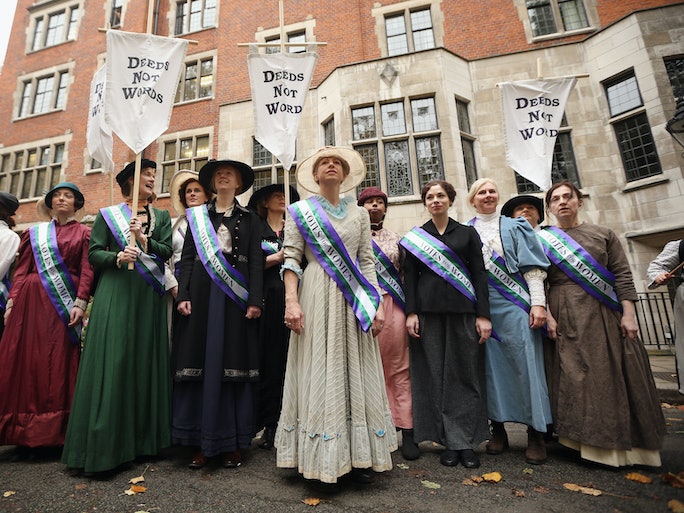 The movie places most of its weight on Mulligan’s shoulders. As Maud, she represents the ideals of the time and the hope for the future. Her struggle to fight for a just cause or conform to the status quo is very clear and well acted. Mulligan is a gifted actress who doesn’t seem to give any bad performances. However, her character here is difficult to dislike, which is part of the problem inasmuch as it creates a simplistic character. She is a dependable worker, a dutiful mother, a loyal wife, etc. Normally this wouldn’t really be an issue because this is how heroes are presented. But the movie sacrifices important plot points and history in order to make us feel sympathetic to Maud’s plight. Yes, Maud is experiencing injustice and hardship but this movie is supposed to be about the suffragettes (plural) and how they managed to incite change.

Emmeline Pankhurst, for example, is supposed to be a key figure in the movement. Her activism has made her a high valued target for the police. Her speeches galvanise women into taking action. She is a force to be reckoned with. Or she’s supposed to be. The movie gives her a cameo unworthy of Meryl Streep’s talent. It’s not just the short length of her screen time that’s the issue, it’s her lack of impact. Not everyone who sees the movie will know Emmeline’s background and/or significance. The movie doesn’t really give us much details and so the character becomes underdeveloped and this undermines her influence. What exactly makes Emmeline such a powerful woman? Sure, we hear a couple of her exploits but it is comparable to what the suffragettes are doing. We are expected to just accept that she is important enough for the suffragettes to blindly follow into battle. It’s lazy story telling really. 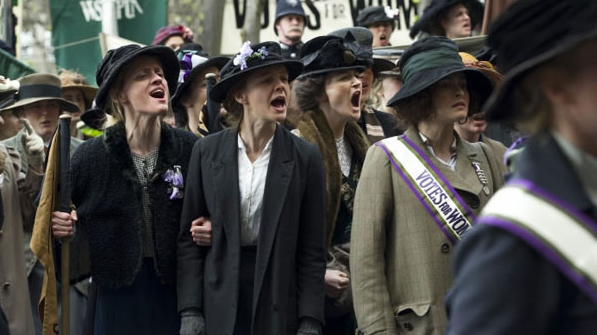 The cinematography was also distracting at times. It felt as though the movie was going for a kind of documentary style with its sometimes overuse of handheld cameras and close-up shots. For example, in the rally that saw the women’s testimonies about their unfair working being dismissed by the king, the riot that ensued was supposed to show the brutality of the police. Women were being punched, kicked and hit with clubs, there was blood on the streets, and yet all we get is a bunch of shakey cam shots and close-ups of bloodied faces but no real scale of the entire thing (we are told the police attacked all the women). It would’ve been more effective to use a long shot to show the police targeting the whole group rather than just the instigators. This cinema verite approach detracts from the story because it comes across as amateurish rather than impactful.

It was really Carey Mulligan, Helena Bonham Carter and Anne-Marie Duff who make the film worth watching. They are believable and you are interested in seeing what will happen to them. The movie is really just a general run down of the events that happened and their outcome. More careful selection of the history behind the movement would have made the movie better. Overall, it is an important story that is not only relevant but also intriguing; it just focused too much on one character instead of looking at the context and other players of the time.