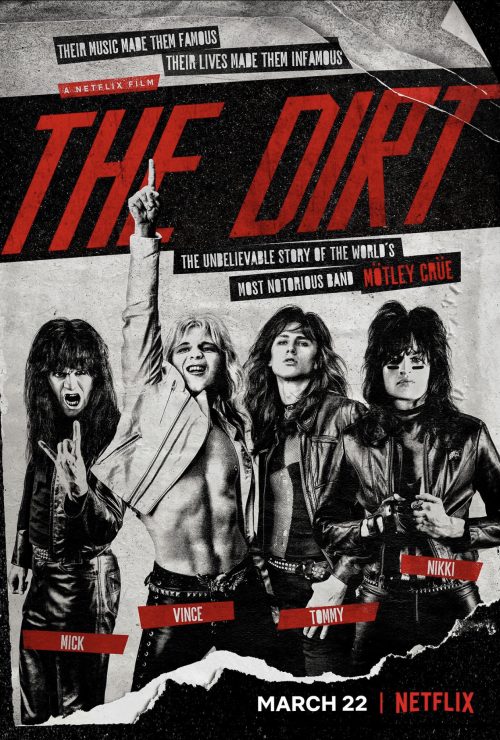 Narrated by its band members and manager, the story showcases how Mötley Crüe came to be one of the most notorious rock ‘n’ roll bands in history. Packed with an electrifying selection of their best songs, The Dirt has enough story to make for an enjoyable film.

After a somewhat graphic opening scene that surely puts good use of the phrase “sex, drugs & rock’n’roll“, the film jumps back in time to show Nikki Six’s (Douglas Booth – Mary Shelley) troubled childhood and love for rock music. Then we get to see how the band is formed and make it into the big leagues.

When you’re at the top, the only way is back down. So down they fall – hard. Going to hell seems to be rock bottom for these guys and for some of them, this really is their last resort. But this was for them the only way to get back on their feet and realise they’re legends, more than ever before. The film likes to break the fourth wall, with front-facing narration showcasing just how crazy these bandmembers actually are. Speeding up and slowing down frames is one of the other tricks director Jeff Tremaine (Bad Grandpa) likes to use.

Music-biopics seem to be the trend lately in Hollywood, only this one isn’t exactly shy of showing all the sex and drugs, so expect plenty of that throughout the film. The Dirt wants to go for shock value in its first half of the film, to then go full drama in the second half. Still, The Dirt isn’t as bad as I thought it would be. It might be very much by the book, but the chemistry between the cast and it rocking soundtrack make this an enjoyable watch. It’s one of those films that critics will love to pick apart and most Netflix subscribers will mostly enjoy.

The Dirt is now streaming on Netflix.