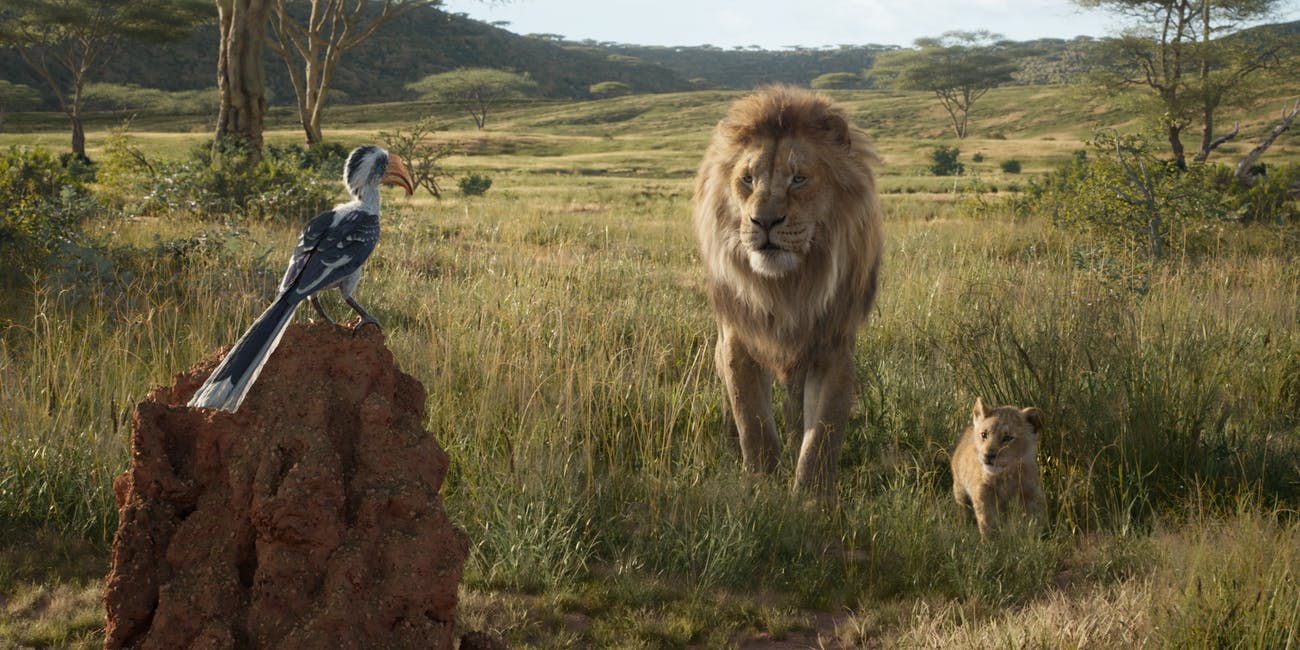 How do you adapt the biggest and most inconic animated films that your studio has ever produced? The animated version of The Lion King was originally released in 1994 and was undoubtably the biggest film in the Disney 90’s revival era. If like me you are a child of the 90’s you will remember seeing the original film in cinemas. Not once, not twice but multiple viewings with a myriad of different friends. It was also a cultural phenomenon, but of course you know that already. It was the Frozen of our generation. So when Disney found a massive hit and success with their live adaption jaw dropping Jungle Book CGI hybrid remake, it was an easy bet to use the same director and enlist a star studded cast to bring the animated hit to life (sort of). The problem is by doing this so much time was clearly spent lovingly crafting the visuals, that somewhere along the way, they forgot to add the depth, the heart, the emotion and mostly the joy of the original film in this souless beat by beat update that does little to justify its existence, apart from visuals that will be outdated in a few years anyway.

You all know the story, this time around Simba is voiced by Donald Glover, Nala is voiced by Beyonce and James Earl Jones returns to voice Mufasa. Comedians returns to voice the supporting characters with late night host John Oliver voicing Zazu and the scene stealing saviours of the movie Seth Rogen as Pumbaa and Billy Eichner as Timone. If it wasn’t for their chemistry, their off the cuff humour and energy that lifts the film out of this weird morbid tone that never feels right, for me it would be a total wash. Remember the cheeky and fun Rafiki? Neither do I…this film takes his heart and fun away and replaces it with a more serious and sombre side that feels like a change for the worse.

All of the songs are here, the only problem is they are completely lacking in delivering any solid emotion or punch. The Circle Of Life is dimmed by odd visuals and a swipe motion in on Pride Rock that was quite frankly insulting, I Just Can’t Wait To Be King takes the colour, the fun and cheekiness away and feels like it’s only there because it has to be. Can You Feel The Love Tonight should have been re-written to Can You Feel The Love This Afternoon, seriously it’s the middle of the day and there are singing tonight…they even talk after the song and it’s still daytime. Be Prepared is a complete bastardisation of the original track and the sooner that we can all forget about that, the better.

While the soundtrack was lacking, the score was sweeping and epic complimenting the visuals every step of the way. The Hans Zimmer score feels more full than the original version which really does help with the technical mastery on display this time around. Beyonce’s new song “Spirit” plays in the film and feels not only completely out of place, but is inserted in a very strange spot that didn’t match what was happening on screen.

It may sound like I am being overly critical and harsh on this film, but it’s The Lion King. If you are going to tackle the beast, you better do it justice and unfortunately this didn’t hit the mark. While the visuals are stunning and spectacular with the animals, in particular Pumbaa looking photo realistic, Disney still haven’t mastered lions just yet. The lions are completely expressionless, they don’t emote well through their features and it didn’t match the voice acting or reflect the events of the film in a way that the animation did. Even Aslan in Disney’s The Lion, The Witch & The Wardrobe emoted more than these, it was just a huge part of the puzzle that was missing and a major detriment to the film.The environments were beautiful and will hold Africa in a snapshot of what it is at this time in history with arid dried up lands, lush forests and beautiful savannah.

The films more scarier scenes with the stampede, elephant graveyard and final battle at Pride rock actually showcase some strength. It allows for Scar to be a bit less dramatic and menacing to being downright cruel and vile in this updated version of the character. The hyenas are much more boding in this update, with a splash of humour still given to Ed to not make it too scary for younger viewers (no promises though, it does get REAL dark).

The Lion King will undoubtably make a billion dollars, maybe even two with the house of mouse updating their biggest hit and relying on an inter-generational audience wanting to relive their childhood and introduce their kids to a prettier version. Adults will get a riotous laugh out of Timone & Pumbaa while kids will love the cuteness and the story that we fell in love with all those years ago. Unfortunately apart from the updated visuals this film presents no real reason to exist, apart from another addition to the live version film updates that show no sign of slowing down anytime soon. A chance to update this classic and bring something new was squandered for a shot by shot, line by line remake of the original that outside of its visuals is a disappointing hollow shell.

Oh and that scene at the end with Timon and Pumbaa that you think is going to be in the movie is worth the entire 2 hour slog just to see alone. You know what Im talking about

The Lion King is in cinemas tomorrow.