The Man Who Sold His Skin – Alliance French Film Festival 2021 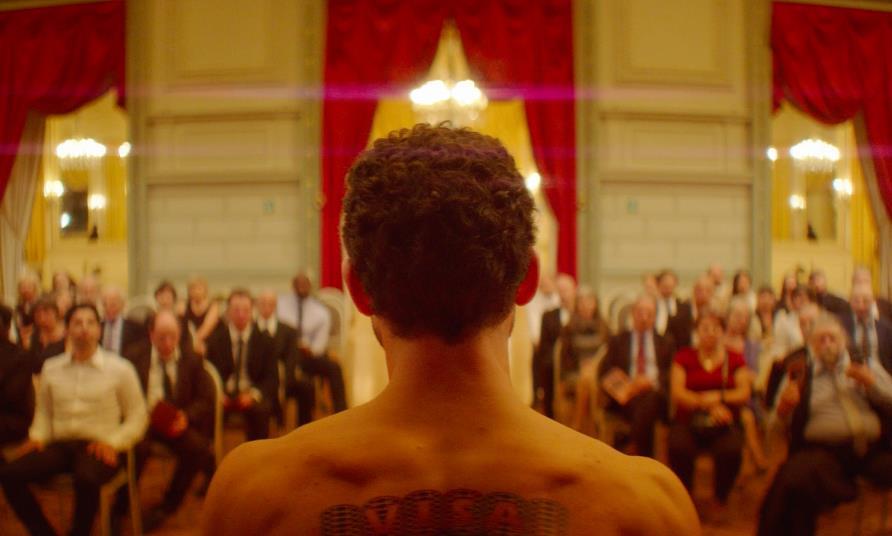 Sam Ali (Yahya Mahayni) is a Syrian man who is in love. His public declaration of love that The Man Who Sold His Skin opens on is for Abeer (Dea Liane), a Syrian woman who also shares the same affection for Sam. Unfortunately, Abeer is moving to Belgium, already promised to a man in Brussels. Not letting anything stand in his way, Sam attempts to flee Syria into Lebanon in an attempt to gain asylum into Belgium but is captured and promptly escapes from Syrian police.

On the run, he sneaks into an art exhibit for food and shelter only to be propositioned by a controversial artist, Jeffrey Godefroi (Koen De Bouw) – to escape the civil war in his country and pursue Abeer for the price of his back as a canvas to be displayed to the world. Accepting Godefroi’s deal, Sam has an immigration visa tattooed on to his back as a controversial political statement for the artist and is placed on a roadshow of exhibitions in art galleries all around Europe as a living, breathing piece of art. Under a global spotlight full of art connoisseurs, auctioneers and human rights activists, Sam must battle within himself whether the price he has paid is worth the freedom (or lack thereof) that he has gained.

In her second feature film effort, writer and director Kaouther Ben Hania has crafted an incredibly interesting and unique breakdown of themes and subjects that are usually shown straight forward as documentaries or biopics – immigration and the desire to give everything away for the chance to live a free life. And while the scenario of Sam literally giving his skin as art seems slightly larger than life, it is the core fundamentals of the story and characters that make The Man Who Sold His Skin feel grounded in reality.

This film is quite confronting. The audience is forced to feel uncomfortable with the situation and ask legitimate questions about the morality of what is occurring. Hania’s script also provides many different perspectives and viewpoints on the moral spectrum and provides a consistently engaging narrative that is reinforced by a great lead performance from Mahayni as Sam.

There is never a point in the movie where compassion isn’t felt for Sam. Even when it seems he has made wrong decisions or is losing hope in his pursuit of Abeer – Mahayni commands the empathy of the audience which drives home the emotional investment, even in the films slightly more unrealistic scenes.

The Man Who Sold His Skin holds its high standard right until the end, with a final 10 minutes that initially felt jarring (which is definitely intended by Hania). An argument could be made that there is a feeling that the direction the script takes is unnecessary, but upon reflection, it does somewhat retain the films established grounded-yet-eccentric tone and does steer more towards an incredibly likely outcome had this been based on true events.

It is not often that films can find that balance of absurdism in its subject matter whilst also making an impactful statement simultaneously. However, The Man Who Sold His Skin manages this through fantastic writing and directing from Hania and a brutally raw performance from Mahayni and the supporting case.