It’s a heavy episode this time on Please Like Me. Last time we saw Claire reveal she was pregnant and had scheduled an appointment for an abortion. What was excellent about Pancakes With Faces was how it didn’t glamourise nor condemn abortion. Yes, the show has a more pro-choice approach, but it didn’t portray this as the only/best option. Even the pro-lifers outside the clinic were not portrayed as abusive or downright crazy (as seen in many other shows and movies). It was simply the best choice for this character at this time.

Another thing that was fantastic was how well it showed the steps a person has to take in order to go through with the abortion. From the initial meetings to the medicine needed to be take and the emotional aftermath, it was all portrayed with respect and totally in line with the characters. Props to the actors and writers for tackling such a controversial topic in a mature way. It really shows how well Please Like Me itself has matured over three seasons. 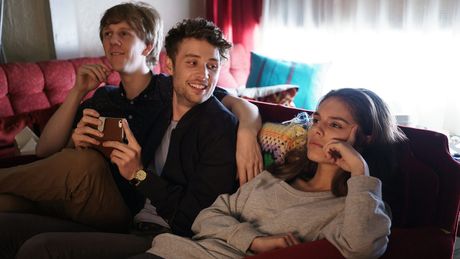 The scenes after Claire completed the process were some of the best writing I’ve seen in Australian television. Caitlin Stasey is really fantastic as Claire. Her emotional journey was restrained but all too clear. And her relationship with Josh feels so real. They do love each other very much. In fact, Josh seems to be more of a supportive character this time around. While he is still going through his own messy life, he might have it together more than anyone at this stage. He’s certainly acting as the crutch for his family and friends in a way that doesn’t overwhelm or demand much from him.

On a lighter note, Tom and Ella’s relationship seems to be developing nicely. Their exchange at the cafe where they officially label each other as “boyfriend/girlfriend” was funny and sweet. Both of them play off each other so well and it actually feels like they’re on even ground. Tom’s previous girlfriends have taken advantage of him in one way or another but Ella is different. Maybe because, much like Tom, she has a lot of soul searching to do herself. Perhaps Tom has finally found a suitable long term partner. He deserves it.

After all was said and done, the closing scene where the gang ritually destroys Tom’s cardboard box city was perfection. John’s inability to destroy anything (as Josh says, he’s a pacifist) was adorable and led to the beautiful Clairezilla moment. Dressed in Josh’s frog onesie, Claire stomps and destroys the city and it is funny and endearing just such a great closing. Can’t wait to see what the rest of the season has in store for us.