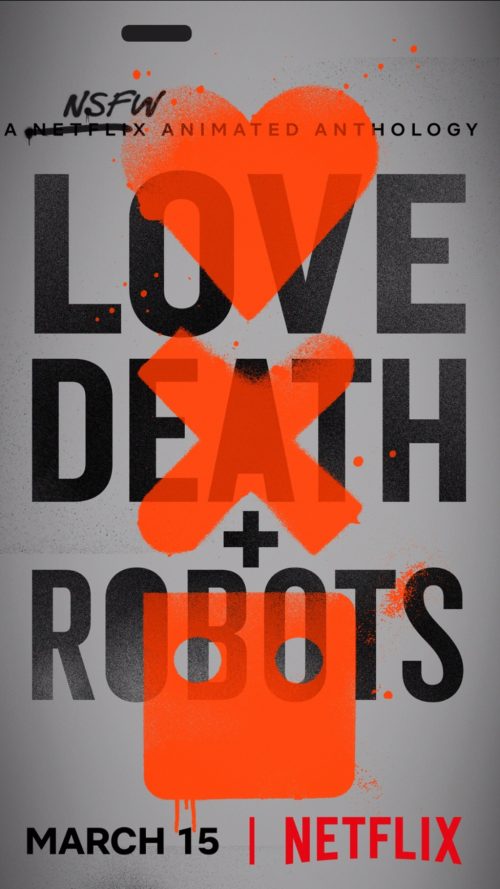 Love, Death & Robots is an artistically well written anthology series. Its 18 episodes are all influenced by animation and is probably the most exciting series released on Netflix in a very long time. The series is very NSFW with the amount of nudity and cursing in almost every episode. But the animation in every single one of these stories is unique in its own way. The short stories are easy to get through as they fly by and you’ll wish it was a feature film.

18 episodes, 18 short films, all under 20 minutes runtime. They’re all science fiction based, and David Fincher (Gone Girl) is the executive producer of this series. The idea came from none other than creator Tim Miller (Deadpool). Some of the shorts are based on literature, some are completely original stories being told in their own extraordinary way. They all have a different theme, a certain twist to them that leaves you begging for more and their own style of writing that makes every episode unpredictable. Most of these “mini-movies” will make you think about things in a different way and truly blow you away. And yes, not every story will be your taste, but in my case, there were only two of them that didn’t compel me in any way. Some of the more endearing, longer episodes could easily be turned into blockbusters – the quality is just spectacular.

Whichever one will be your favourite, truly depends on your own personal taste. There’s some very realistic animation in a few of them that makes you question if these are real actors on screen (there’s only one episode that actually uses real life actors without any mocap) or computer-generated images. Some other styles reminded me more of a European animated style and even manga passes by.

Like I said before, there’s a lot of nudity and swearing, and in some of the episodes it feels a little bit out of place. Mostly because of the animation style that feels more “kid-friendly” – don’t get me wrong, this show is strictly for adults only! But other than that, in some episodes it really adds to the whole of the story.

A reoccurring theme is obviously the titular three – Love, Death and Robots. These three themes will either go hand in hand with each other and other times you’ll only see one of these incorporated into the story. It all depends on the subject. Ideas around humanity’s future, our own demise and the relationship we have with space and other species is explored over and over again. It never feels preachy throughout the series and makes you laugh, feel sad or truly terrify you.

Each and every animator that has worked on this is talented and has their own vision on how to tell a story with their certain technique of animation. The beautify of this anthology series is that there’s going to be something for everyone.

Love, Death & Robots is one of the most unusually artistic shows of the year. Don’t miss out on watching this ASAP!

Love, Death & Robots is available to stream on Netflix.