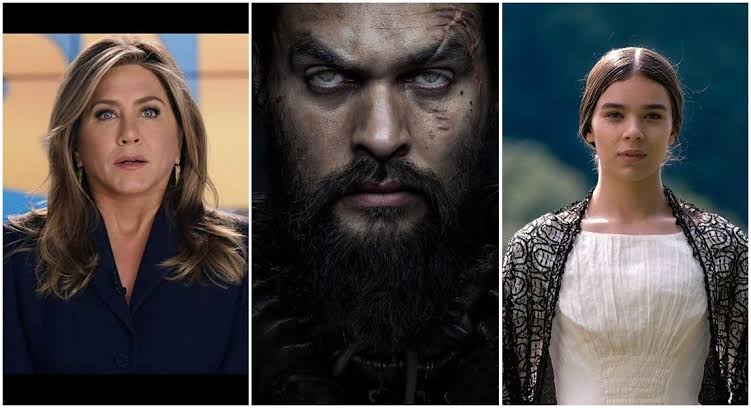 This weekend saw the launch of Apple TV +, the tech giant’s big gamble into the streaming game. While they don’t have a back catalogue of content with existing IP’s or anything to draw from, they have delivered a total of 6 TV shows and 1 documentary that should keep you busy for a while. What follows are some reviews of the launch titles for the service.

Morning Wars (aka The Morning Show) – For some reason the title of the show has been changed in Australia. Anyway the show had an A-list cast including Jennifer Aniston, Reese Witherspoon, Steve Carrell and Billy Crudup.

Set in the post Me Too era, the show revolves around a morning news show titled The Morning Show hosted by Alex (Aniston) and Mitch (Carrell) when allegations are brought forward of sexual misconduct against Mitch, Alex must deal with the swirling aftermath of the Me Too movement and find a replacement co-host. While the TV executive’s are plotting to get rid of Alex and find a new hosting team, Alex must take control of her destiny and runs into Bradley Jackson (Witherspoon) a brash and loud journalist who is the polar opposite of sweet Alex.

I have seen the first 3 episodes of the show and after a strange pilot episode, the following 2 episodes help showcase what the show can possibly become. It showcases Aniston’s incredible talent and it is great to see her back on screen in a weekly TV spot again. The best scenes by far are when Aniston and Witherspoon riff off each other, what could easily turn into bitchy discourse, channels into understanding and support. It is nice to watch a show about two women (especially ones of their stature and fame) not be competing and fighting, but working together.

If that wasn’t enough supporting characters Charlie Black (Mark Duplass) and Cory Ellison (Crudup) are fantastic. They are both polar opposite characters with Black being an extremely  on edge and stressed out producer and Ellison the cool, calm and collected TV network executive who gets off on the chaotic nature of the show and the constant OTT and drama that surrounds them. Their scenes where they clearly do not meet eye to eye is incredibly entertaining to watch. Crudup is clearly having the time of this life in this role stirring up trouble and is entertained by the situations. Rounding out the cast is Carel, who doesn’t get enough screen time in the first 3 episodes to make a solid judgement, the little scenes he does have are engaging and his aggressive interpretation of the character as he starts going through a breakdown is scratching the surface of this character.

Visually the show is simply stunning, filmed on location in New York City, not since Sex & The City have we seen the city showcased so much. The varying day and night shots of the Manhattan elite and their magnificent apartments complete with drivers and Hamptons properties allow for a wealthy view of the world as opposed to the gritty streets showcased in so many shows set in the big apple in recent years. The lingering shots of Alex in her apartment at night sipping wine and reading with the starry city overbearing in the background. Bradley and her producer walking in Bryant park sipping coffee opens on a wide angle shot drinking in the green and grey surroundings before honing in on the actors. The camera whizzes around during the filming of the show zipping and cutting to match the dialogue.

The show seems like it is firmly set on the #metoo side but diverses a bit in episode two and three with Mitch explaining that it was all consensual and he isn’t a predator as he “didn’t rape anybody” (he screams this line several times throughout the show). It is determined to explore both sides of what being a woman is like as well how a white man copes with handed down patriarchy that he must now stand and be responsible to society for. It was surprising that the show wants to explore this and helps balance the show out.

Morning Wars is gearing up to be the next big drama in the same vein of Big Little Lies, if you can get through the first episode, the next two allow the show to truly express where is will go and explore over the coming two seasons that have been greenlit so far. An all star cast with some great guest stars coming in the next few episodes, combine with great dialogue, beautiful cinematography and some well edited scenes make this one to keep a watch out for.

The first 3 episodes of Morning Wars are available exclusively on Apple TV + with a brand new episode coming out each Friday.

Like Loading...
Newsletter Signup
In this article:apple tv +, dickinson, for all makind, see, snoopy in space, the morning show, TV
Up Next: