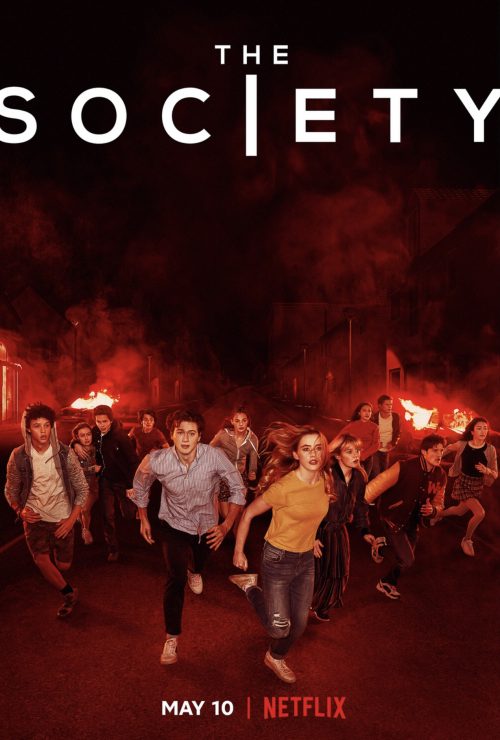 The Society is a problematic drama-series that tries to tackle different socio-psychological subjects in each episode, such as relationships and the pressure of survival in a world falling apart without any real leadership. It fails from the get go without providing any narrative and a real objective – that arrives past its due date. It looks like the perfect teen drama for Netflix, in the likes of Riverdale and The Chilling Adventures of Sabrina, but it never delivers. Under The Dome meets Lord of the Flies, hell, it doesn’t even come close to the ones I just mentioned, because the tone is all over the place and the show takes itself way too serious.

The series revolves around its main mystery of how a group of high school students returns from a school trip, coming home to an abandoned town. But this main storyline only comes up when the writers want to address it and keep tackling side stories that actually don’t even matter. So by the time the actual mystery gets addressed, we’re already watching the last episode and we see each minute ticking by without getting any answers, clearly hoping for a second season pick-up..

Being unsupervised with access to everything, there is a lot of drinking. And sex. They focus on safe sex and contraception, but everything feels so forced. There’s little to no diversity, although most girls are strong female characters, which I liked most about The Society. Olivia DeJonge, Kathryn Newton, Gideon Adlon and Kristine Froseth being the standouts.

This “first” season throws many teenage problems into the story as often as possible, diluting the concept altogether. It tries to pull most viewers in with that dystopian hook, but The Society should’ve focused more on its characters. I definitely didn’t care for 7 different stories cramped into a single episode.

Created by Christopher Keyser, who recently wrote Amazon-series The Last Tycoon. It also shows that 8 directors (!) have directed episodes for this 10-episode season, since every episode seems to go back and forth without telling anything that actually matters.

The whole series feels disjointed as its trying to make me feel like a teenager in the same crisis, but never really develops further as a person in this situation would do. It never made me care for any of these characters and I felt more like a bystander that couldn’t care less about anything that’s going on in this small town in New England. There’s too many loose ends and plot holes.

The 10-episodes run for an hour each, which is quite long for a teen-based drama these days. Is it worth your time? Maybe for some, but after bingeing it over two days straight, I felt cheated on in the end. The cast itself isn’t the worst, although there are some members that could benefit from a few acting classes. I like to think of the first season of MTV’s Scream tv-series that had a great storyline in its first season, but the acting was atrocious. When watching its second season, you could clearly tell the entire cast had improved and this made me keep watching the show.

So if The Society can improve its cast members and focus more on the main storyline instead of getting distracted by unnecessary side-stories, then who knows what its future is.. But for now, it’s a hard pass and I would suggest spending your time on something more interesting.

The entire first season of The Society is now available to stream on Netflix.