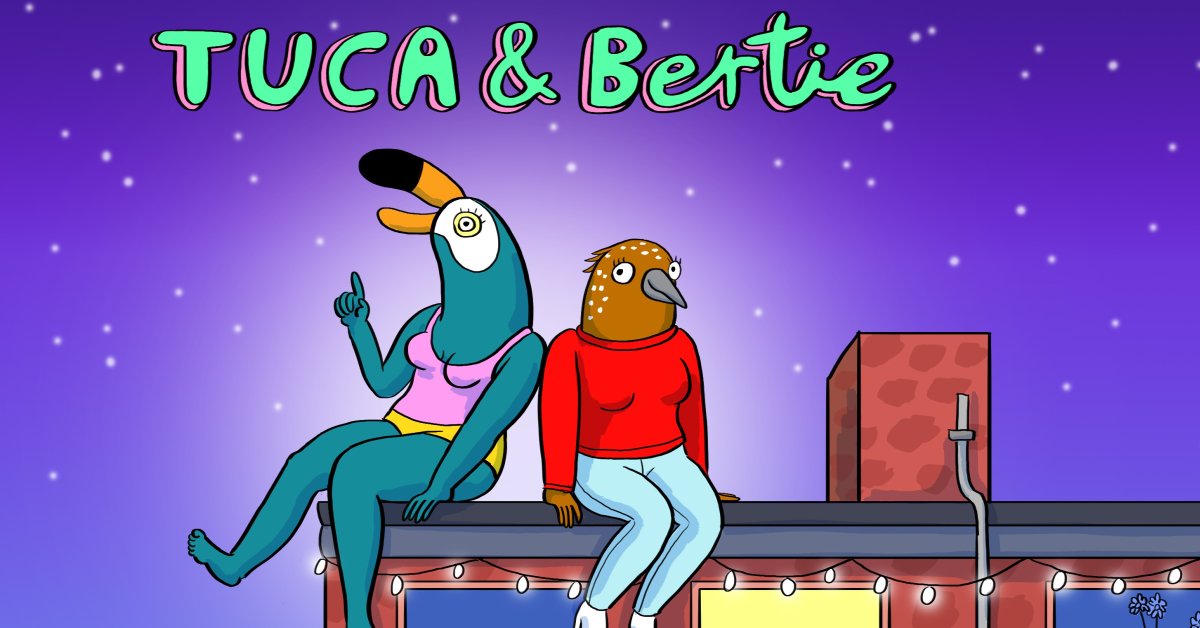 Comedy is subjective, like most art forms it either finds a mainstream voice or becomes a niche that if great enough earns a cult following. Comedy shows in the past have proven this time and time again with Community. Arrested Development and Bojack Horseman. This show features two high profile comedians Tiffany Haddish and Ali Wong as the title characters and comes from production designer and and Bojack Horseman animator Lisa Hanawalt. While the show shares many visual similarities with Horseman, so much so that you could be fooled into thinking it was in the same universe, there is a completely different vibe to this that once it finds its stride, delivers another entertaining and quirky animated hit for the streaming giant.

The show focuses on the friendship of a toucan aptly named Tuca (Haddish) and a robin named Bertie (Wong) as they navigate their friendship after they are no longer roommates when Bertie moves in with her boyfriend Speckle (Steven Yeun) and while Tuca doesn’t move far (the apartment upstairs) the first season explores the relationship between Bertie and Speckle as they explore living together. This goes hand in hand with Tuca and Bertie’s relationship and Tuca’s dependency on their friendship.

We have had so many shows that explore female friendships and while some are gross out sex romps like Sex & The City and others combine this with some millennial fem-friendship comedy like Broad City, Tuca & Bertie seems to walk the line of diving into the honest dialogue in a friendship and discussing their sexual escapades. In a world where things like career, boyfriends and world changes constantly, the one thing that is constant between these two is their friendship. This season explores the strength of their bond and the dependence they have on each other is nowhere near as bad as it seems at the start of the show.

A big part of the show that has carried across from Bojack Horseman is taking wildly inappropriate things from our world and making them hilarious in the anthropomorphic world. This is a lot more vulgar the Horseman and while there is a slight dark undertone, it never dives too far into this territory, it does keep the focus on the friendship. There are glimpses into subjects like #MeToo and toxic masculinity at work that is explored through Bertie’s work at the bakery. Her boss constantly oversteps the boundaries of professional and sexual exploitation to perfect his creation the “Crunt” This is highlighted further when a new intern starts at the bakery and Bertie realises that she has been taken for a ride. Similarly at her office she is always hankering for a promotion, trying to get ahead and unable to get through the boys club.

While the themes do run deep, there is a lot of comedy here. There are great observations about living in cities, over population ahd the scene stealing sex bugs (you will love them!) make to deliver one of the funniest animated series in recent years. The run time of 15-20 minutes per episode make it a perfect lingering taste after each outing. The world that they live in beautifully littered with apps like ChoreGoose that allow Tuca to do things similar to Airtasker, their upstairs neighbour is called Dapper Dog who smokes a pipe and has a tweed cap. Bertie and Speckle watch a show called Nests of Netherfield similar to Downtown Abbey. Having two characters that are very different is also a massive part of the shows appeal. While Tuca gets sex bugs, Bertie reads books like Hot Sex For Agreeable People.

The animation is definitely worth talking about, the colour and beautifully detailed world is so easy on the eye. While the show is a definite spiritual successor to Bojack Horseman, it does feel a lot brighter and welcoming than the harsh hills of Hollywoo.

While I found myself fully involved in this world as a gay white male, I can only imagine how great it is for women and people of colour to see great representation that is well written, smart and downright hilarious. Tuca and Bertie is a triumph in not only animation but for such high profile voice talent to lead such a great show.

Tuca and Bertie Season 1 is now streaming exclusively on Netfilx.