“The Siege of Lothal” picks up events from the last season’s finisher “Fire Across the Galaxy”. Here we find our rebels joining up with a 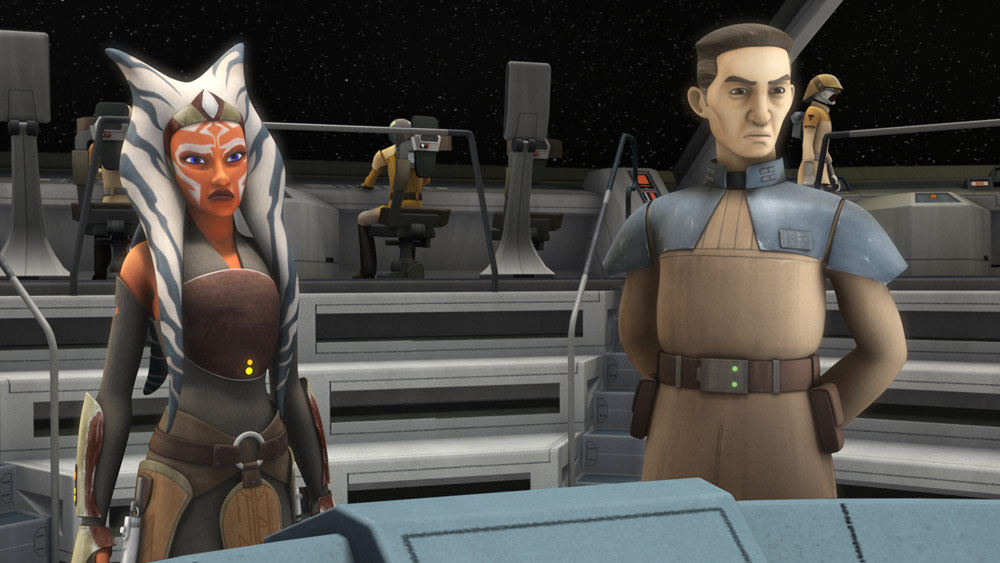 much larger organisation of like-minded individuals. One of these organisations is none other than Star Wars: The Clone Wars veteran Ahsoka Tano, former apprentice to Anakin Skywalker now much older and facing a much more fearsome fight ahead.

The overall plot that lasted for the length of two standard episodes revolved around the Rebels once again returning to the planet of Lothal. Kanan and the crew attempted to perform an extraction mission to get a defecting Imperial Official, Minister Tua, away from the clutches of the Empire, particularly Darth Vader. Along the way, the group runs into trouble of paramount concern. It’s great that the show is willing to kill off characters, little things like that help Rebels bring itself more into line with the Star Wars movies.

This episode starts well with a neat space battle featuring the crew of the Ghost alongside the new Rebel fleet. It is done well visually and fans will enjoy the team banter during the dogfight. However, things don’t seem to be all that well among the Ghost crew since joining the rest of the Rebels.

One aspect that was interesting was the conflict within the team. On one side you have Hera who is blessed to be part of this larger movement and on the other, you have Kanan who just didn’t want to face another war again. Both sides make interesting arguments. In my opinion, I’m going to side with Hera on this debate, this is because the contrast between both characters sort of calls back to the novel A New Dawn by Johnathan Jackson Miller that took place before the events of this television show. It portrayed Hera as a rebel pilot looking to make a strike against the Empire whereas Kanan was a disillusioned former Jedi turned Gunslinger. It wouldn’t be good progress for a character to regress back to that. Fortunately this was resolved by the end of the episode.

Now the biggest new aspect the show is bringing is none other than Darth Vader. Vader is really what makes this episode really sell itself to the

different audiences watching the show. Here the famed villain is in the prime of his existence, set well before Anakin Skywalker’s redemption. Visually, I’d say Vader’s design and presence was very well done. From the very first entrance, the animators used all the right shots along with the famed Imperial March theme to set up the ominous presence of THE Darth Vader. We see a fight with him taking on both Kanan and Ezra. It’s pretty clear that there is a strong contrast between the skill level of both of the show’s Jedi and the Dark Lord of the Sith. I’m very interested to see where Vader goes next in the series.

The way Ahsoka Tano was handled in the episode was also well done, even though her presence wasn’t a strong factor in this episode. Ashley Eckstein added some subtle adjustments to her execution of her voice to illustrate that this is a much older Ahsoka who’s seen quite a bit since we last saw her in Season 5 of The Clone Wars. The final moments of the episode also possibly imply a soul shattering revelation that could set up some interesting character arcs in the future.

Bojack Horseman Is The Best Show You’re Not Watching

The Awesome of “Inside Amy Schumer”