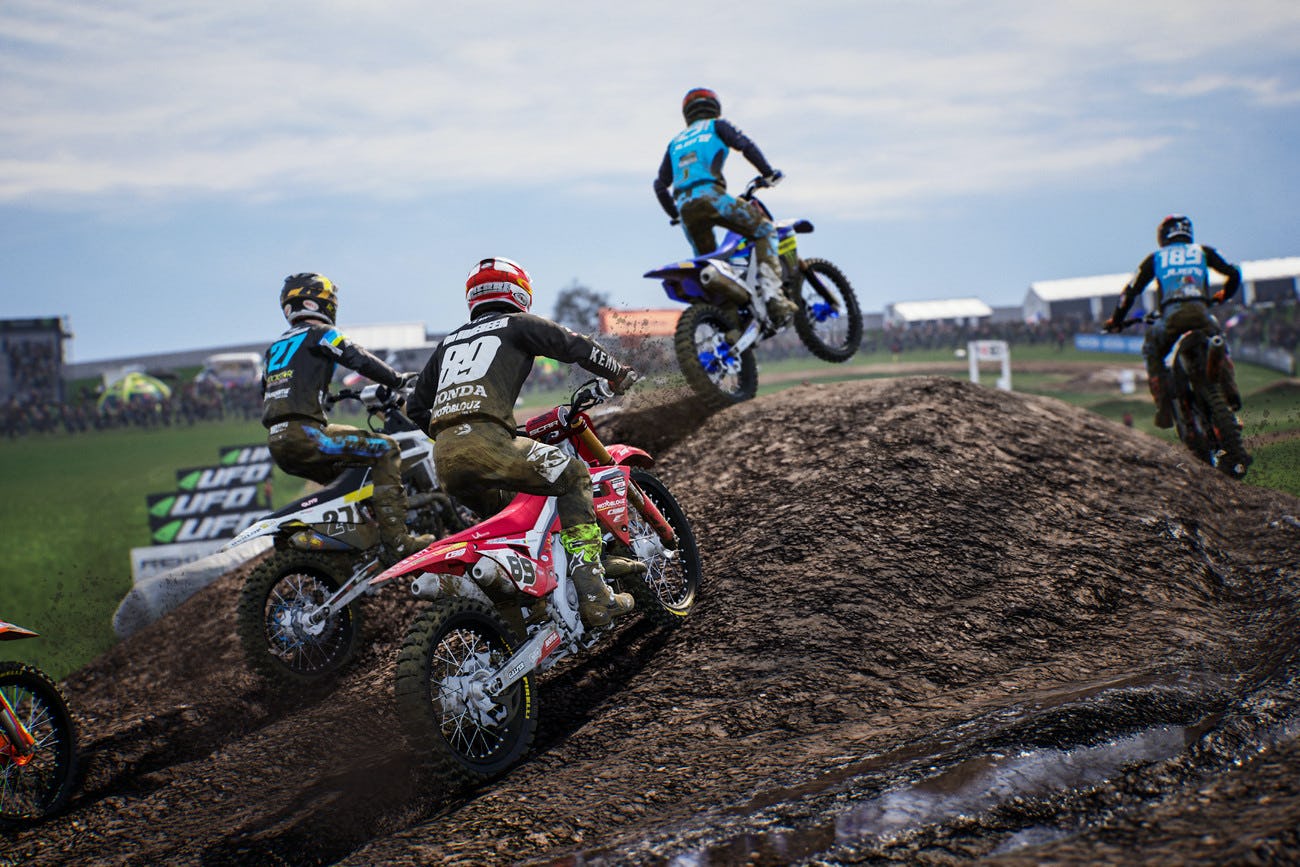 Developer Milestone have solidified their name in creating a variety of racing games, with their staple franchises being the MotoGP series and now continuing their MXGP franchise with the sixth game in the series, MXGP2020. Balancing a decent blend of arcade style fun and motocross simulation gameplay, MXGP2020’s first foray into the recent upgrade of gaming consoles genuinely feels like a first step towards some amazing things to come for the future of racing gaming.

Upon launching the game, a simple character customization doesn’t necessarily give the gamer a lot to play around with (mainly allowing nickname selections and entry level bike choices that won’t be customised later on), but it’s brief enough and followed by immediate gameplay that it doesn’t leave much time to grow impatient waiting for something fun to begin.

The opening race looks great! Aside from some quiet generic audience members watching on with occasional cheer or groan depending on how well the race is going, the locations are magnificent. The muddied track accents the green pastures surrounding the tracks, which stands out as a vast improvement on previous games textures and graphics. The bike moves around in a way that looks (and feels) realistic enough to feel like this is a simulated version of motocross racing. The standout visual however is in the games ‘Playground’ mode.

‘Playground’ is a semi-open world set in Norway that allows players to freely ride around an area that’s filled out with long tracks, large jumps and mini games that will help hone in the skills needed to progress in the career mode. A good portion of time spent here will definitely not only provide hours of fun in the game but is a welcomed addition for people who haven’t experienced this type of game before and need some time to work out the controls. Immediately entering the ‘Playground’ however is an awesome experience that looks fantastic on the PS5. Not something to be always expected in a game like this, the genuinely beautiful visual aspect of MXGP2020 was a welcomed surprise!

As previously mentioned, the majority of the games focus in on the career mode, where the gamer takes part in a series of championships to earn enough points to upgrade bike statistics and work their way through contracts for motocross teams. It’s a very straight forward process and while the gameplay only varies in difficulty as the championships reach a more elite stage, there is more than enough variety in the worldwide locations the race takes place to make career mode an interesting and engaging element of the game. A Grand Prix mode, which like most racing games is a condensed version of championships, and online multiplayer brings a strong amount of variety in game types, however the racing itself does occasionally feel similar and repetitive, even when a bike is fully upgraded.

The game is incredibly responsive to controls. A slight push on the joysticks is a slight manoeuvre in game, giving the game an incredibly immersive experience. Playing out (especially in career mode) like a motocross simulator, it does take a while to perfect the range of movements required to win races. There is a noticeable lack of tutorial at the beginning, especially considering the first (unskippable) race is a career mode race. Rather than taking the player through an in-depth free ride, the tutorial is simply the list of buttons on the side of the screen as your race through, making a bit of a muddled first race for newcomers to the game. Once the controls have been sorted through enough time in the Playground, the controllers feedback is quiet impressive. The haptic feedback in the acceleration trigger (R2) is very noticeable if the bike is over-throttled and the coloured lights on the controller change based on things like gear changing and throttling, which is a cool addition.

All in all, MXGP2020 has done a great job at upgrading its style and feel for a new generation of gaming. With modes that will make the gamer feel like they’re competing in a stylised race event, or doing death defying acts in an expansive open world, there is something for everyone to love. And while there is a steeper learning curve that may turn some casual players away initially, sticking it out for the games grander aspects is well worth it.