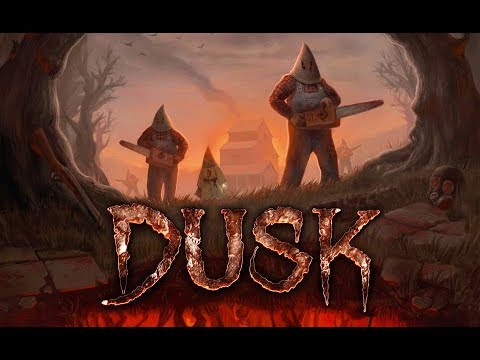 Doom is a first-person shooter released by id Software for the MS-DOS platform in 1993. In the game you play as a space marine battling to contain the forces of hell whilst… Wait, I think I’m getting confused here. I might be forgiven for thinking I’d travelled back in time 25 years, because that’s what one-man studio David Szymanski is shooting for with his old school FPS Dusk. The game is at once a homage and progression of the kind of the furious, adrenaline inducing gameplay that caused titles like Doom and Quake to turn the genre on its head in the early 90s.

Playing Dusk, it becomes clear just how much the first-person shooter genre has evolved in the last 20 years. The advent of Call of Duty: Modern Warfare and Gears of War in the early 2000s saw a turn towards a style of gameplay that more closely fit their gritty, wartime aesthetic and themes. Suddenly, characters moved in a slow, lumbering fashion and combat was relegated to split second aiming down reticules at enemies across the map. Playing Dusk is nostalgic not just on an aesthetic surface level, but because it is a truly faithful revival of the speed and intensity of gameplay that drew so many people into PC gaming in the 90s. It has an energy that is impossible to not be swept up in. Its focus on oft forgotten mechanics like non-regenerating health, a huge arsenal of weapons and emphasis on speed and movement over cover mechanics are will be comfortably familiar to some and a fresh breath of air for others sick of the iterative cover shooters released today.

Player character movement speed in Dusk relative to the environment is simply immense, almost too much at times. The game is unique in that it has a completely unlocked y-axis, allowing the player to execute exciting front and backflips in the middle of battle. Consequently, the wide open outside levels feel the best to navigate compared to some of the more claustrophobic ones, but the effect is always exciting. The game creates a real sense of power in the player, with this beefy arsenal of shotguns and rocket launchers that cause enemies to explode into chunks of viscera from close up. Enemy variety itself is a little lacklustre however. Whilst there is a steady drip feed of different baddies over the course of the game, they mostly consist of the same palette swaps of shambling monstrosities that immediately charge you upon site, either employing simple melee or range attacks. But this is beside the point. Like its spiritual forebears, the enemies in Dusk are cannon fodder, mere hunks of meat in the way of your characters aspirations to be a butcher. They fill the screen and swarm around you to provide sustenance for you power fantasy as you blow them away whilst sliding, rocket jumping and all the while thrashing your head to the excellent soundtrack.

The success of a game with a simplistic gameplay loop such as this is making that loop inherently and immediately satisfying on an almost primal level, so that story and graphics become secondary in the players mind in favour of pursuing more of their thirst for blood. A lot of that required atmosphere can be contributed to the excellent soundtrack by composer Andrew Hulshult. If you go back and play any of the games Dusk in riffing off of, they all had excellent music that really sells the high-octane gameplay loop of sprinting around shooting everything in sight. The Lovecraftian inspired aesthetic is reflected well in some of the more eerie tracks, which serve to build tension before the brutal headbanging metal tunes that kick in when your character becomes locked in the larger arena style segments. These will have you in the rhythm of circle strafing and unloading thousands of rounds in enemies, whilst rocket jumping and flipping around like a maniac. It is an extremely fast paced and visceral kind of action game that puts fun and spectacle at the forefront and the music is a core component of this.

The nature of a straightforward 90s shooter revival like Dusk is that some of the more antiquated design elements from games of that time also find their way into this game. The standard coloured keys ‘puzzle’ are the primary form of level interaction in the game and serve to gate off sections of the level and allow the player to be funnelled through as the developer intended and get the full impact and explore as much as possible. It works, but the bold-faced simplicity can’t help but stick out and feel a little dated, even in a game that is all about looking and playing dated. The bosses also stand out as disappointing. When compared to the atmospheric claustrophobia of the tighter levels and the frenetic movement in the larger ones, the boss battles in Dusk feel a little flat. They mostly take place in medium size arenas, and the bosses themselves require little strategy. The game is still in early access, with 3 campaign chapters polished and a classic multiplayer mode still in beta. If you’re played id’s back catalogue to death and want to see what a real iteration of that formula looks like, I’d wholeheartedly recommend Dusk.