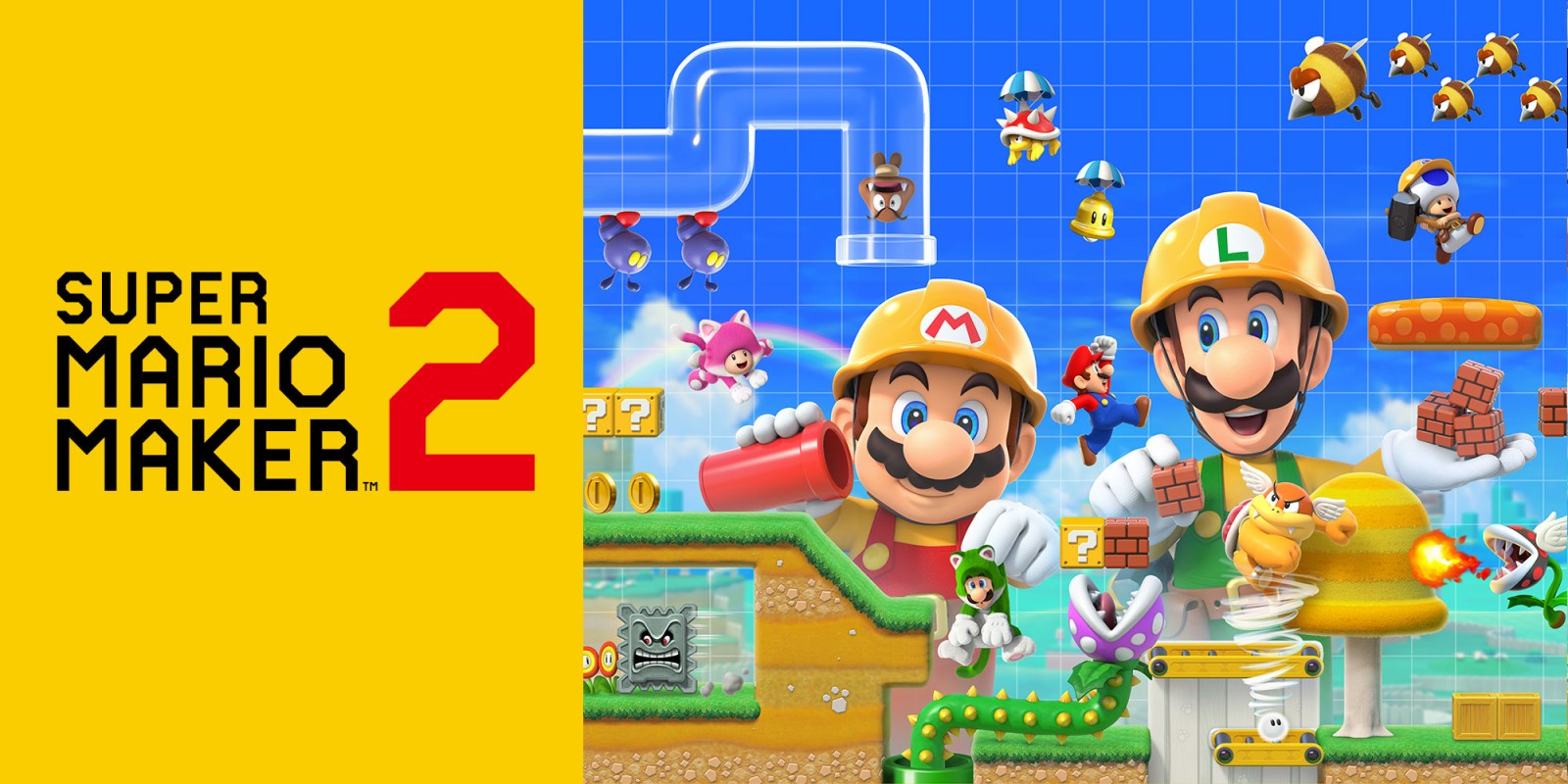 Saying that a Nintendo game had amazing online features and functions isn’t something you normally here, although after the success of the Splatoon series, now comes Super Mario Maker 2 featuring the most meaty and well fleshed out online system Nintendo have made to date. With levels to share, download and play there is so much on offer here, along with a single player campaign that see’s Mario helping to rebuild Peach’s castle by collecting coins, lots and lots of coins. Ultimately this is not why we are here. The joy of making incredibly detailed and nostalgic levels from a plethora of previous Mario titles is addictive and diving into the online array of other levels to challenge yourself to results in endless fun. Super Mario Maker 2 is the massive upgrade we didn’t know we needed from an already astounding game.

While the original concept for the game is essentially the same, the toolkit to create and edit levels has received a hefty upgrade with the addition of Super Mario 3D World with desert, forest and snow themes. Switching things up to Night mode where goombas float, sandstorms rage and if you are underwater everything turns pitch black except for a solitary spotlight on Mario. It’s the thing of nightmares. There are also claws and on/off switches to help Mario reach higher areas in each level. You can also set goals to complete each level like needing to earn a certain amount of coins to successfully complete it. It offers a great depth and variety that was missing from the previous game.

The single player campaign is surprisingly extensive with Peach’s castle destroyed by you know who, Toad hands out over 100 plus missions to collect coins to rebuild the castle to its former glory. The levels are spread out across the five different game styles and the mixture of 2D and 3D was a great surprise and addition to what so could easily have been a phone in addition to please single player purists.

Creating and designing levels is a little bit of a mixed bag. Using a joy-con or Pro controller is still doable, however it is a lot easier when you have the Switch in handheld mode and stylus using the touch screen. You can easily grab and place things, re-sizing and scrolling with a stylus (I used my 3DS stylus to great effect) or even your finger. It’s this portion that heralds the closest feel to the Wii U version. This was also the best way to create and edit levels and it holds up in this version as well.  After completing the level as part of the validation process, you assign it a name, place the correct tags on it (speed run, puzzle etc) After it’s uploaded there is an easy way to share it with your friends via social media and the Nintendo community. You can also create co-op levels with another player using local co-op, this is a handy feature that works well if you want to churn something out quickly. It can also be an interesting game of communication and love language with your partner (warning it may not end well)

If you’re not a budding creator there is an online hub for discovering new levels from creators online which is basically your gateway to an infinite amount of Mario levels. Even if you don’t have any friends who play the game you can still access any level that has been made public. You can also play online with other users and this is the part of the game where is shines. There was minimal lag and always plenty of people to play with. There is a popular level filter that offers a rotating number of high ranking levels that always offers something new to play. You can also choose by tag and or category to harrow in on exactly the type of level you want to play.

Super Mario Maker 2 is the upgrade we never knew we wanted or needed in our lives. Every detail of this game has been maticulously thought out and lovingly created to deliver one of the best Switch titles made to date. Fans of Mario will love being able to jump back into this on their new Switch consoles and the addition of Super Mario 3D brings a whole new world of options. Perfecting online multiplayer was what this game needed to elevate it to superior status, which they have more than mastered. The game has only been out a week and has already garnered a huge following online with levels and creators being shared across social networks similar to the breakout titles Little Big Planet 1 and 2 (sorry 3!) Super Mario Maker 2 is the ultimate version of this title and shines as an instant classic up there with Breath Of The Wild and Super Mario Odyssey. Even if you aren’t into creating levels, there is an endless amount of fun to be had playing levels from the community and is showing no sign of slowing down anytime soon.