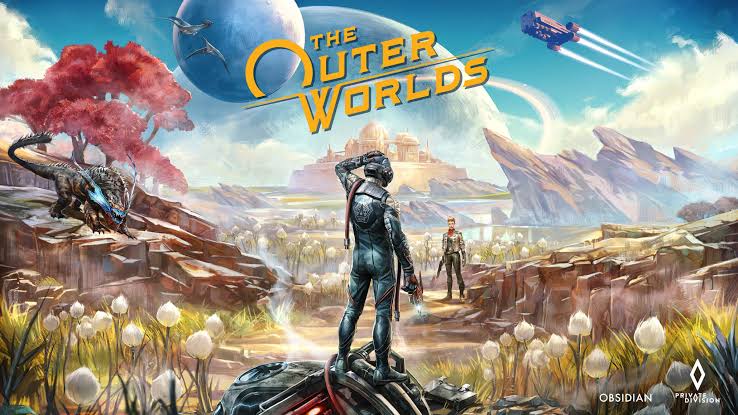 Obsidian are back with a brand new action adventure game set in a post apocaltpyic world that seems very reminscent of Fallout. The difference here is the game has been tightly packed into a 30-40 hour package that has incredible replay value. The planets are packed with rich lore and a keen sense of humour that consistently winks to the player as the game progresses.

The game is set in a sci fi/steam punk era in the not too distant future where mankind has started exploring and settling on other planets. You wake up in a space ship and after customising your character perform a series of different fetch quests to get access to a ship. Each of the different planets is owned by a different corporation and house different groups of colonisers. A big problem on these planets is the local wildlife which is varying on each different place. The local wildlife is extremely dangerous and sometimes impossible to kill outright. Fortunately it is not all run and gun, you can employ stealth to move past herds of monsters that easily overpower you. If that wasn’t enough there are also outlaws who won’t make it easy for you either. While this does sound quite heavy, there is a lot of humour in the writing of this game and each planet houses its own unique brand of wit and charm. It is this combination that really sets this game apart from similar properties like Fallout.

The main action is this game is gunfire, it does have a distinct look and fell that is not dissimilar to Fallout. There are upgrades and mods to find and implement. It is set out easily in the menu system and there are a range of weapons to track down. There is also a perk system that can upgrade your characters abilities. If shooting isn’t your thing, there is a large portion of the game dedicated to puzzle solving. Fortunately these aren’t delivered through mini-games and are just a short few second scene for unlocking doors and accessing other areas when you have figured out what to do.

Visually this game is simply stunning. There is a clear attention to detail in the design of each unique planet drenching it in a steampunk-ish vibe. The colour pallette bursts with red and yellows that are offset on each planet. There are also some outstanding use of lighting and weapon effects that help the game carve out its own unique style. It is worth nothing that the game is currently available on PS4, Xbox One and PC with a port coming to the Nintendo Switch in early 2020 so it will be interesting to see how this translates to the portably hybrid console.

The game is relatively short for a major releae and while there is still plenty to do and you will want to go back and replay it, I am quietly confident that content packs will be announced soon unlocking more planets and adding more missions to keep this game going. This could all just be heresay and hinge on the game’s reception and financial success so while we will have to wait to see what happens (I have both fingers crossed!).

The Outer Worlds is the surprise game I didn’t see coming this year. While I haven’t been a fan of Fallout in the past, there is something about the ease of access to this game that made it much more accessible to all gamers. The humour that is drenched throughout the game is definitely appreciated and adds to the detailed visuals and populated planets. The gameplay is standard open world fare, the emphasis on planetary exploration is a clear stand out that helps seperate this from others in the same genre. Make sure you believe the hype, The Outer Worlds is an incredible achievment in gaming and the best news is, no matter whatn console you have , you can play it.