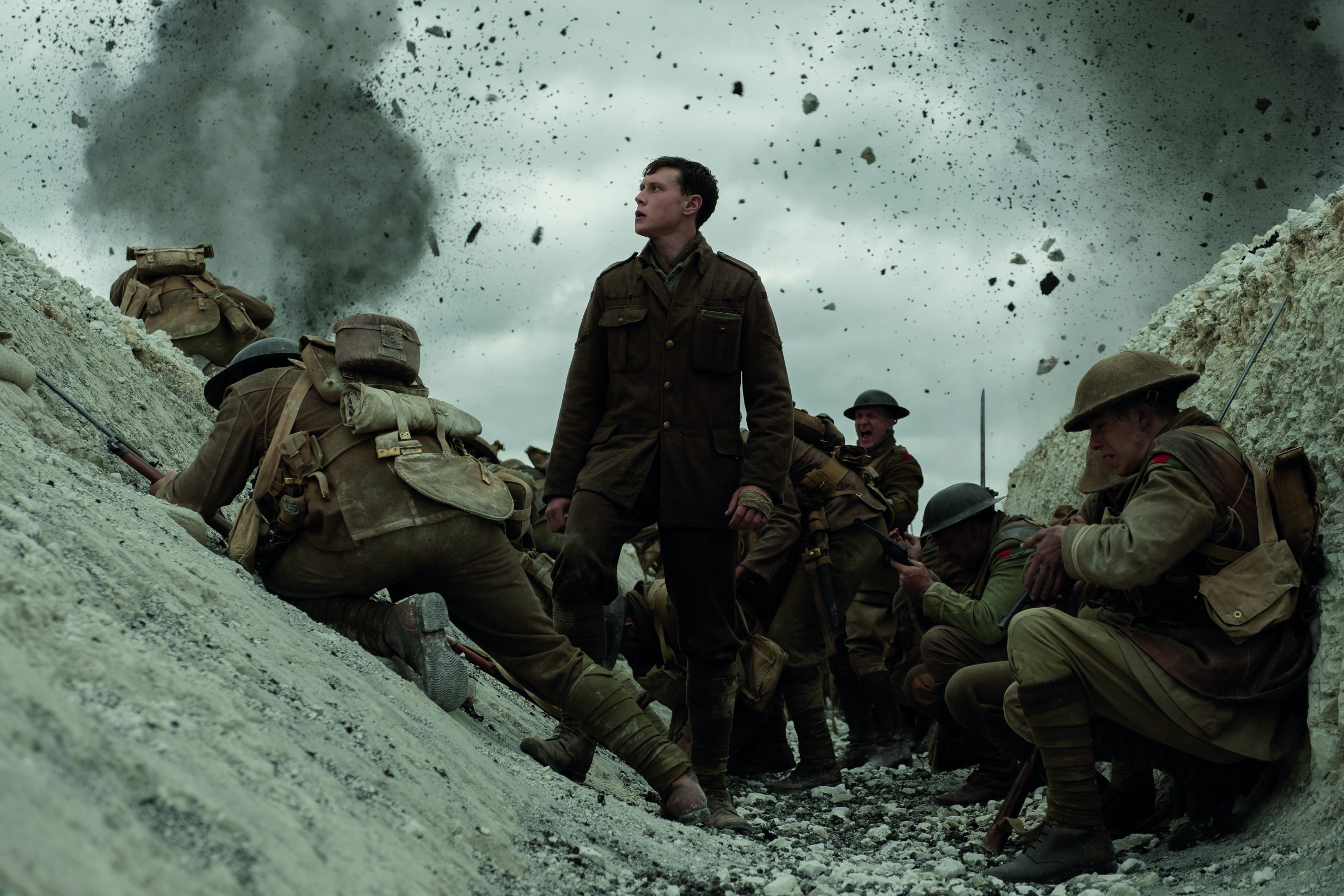 Sam Mendes has delivered quite possibly one of his best films to date in this World War One epic he directed, produced and co-wrote. 1917 centres around two soldiers in the British Army, Lance Corporal Blake (Dean-Charles Chapman) and Lance Corporal Schofield (George McKay).

The two soldiers are located on the Western Front in France when news comes through the Germans are on the retreat. But Blake is requested to report to General Erinmore (Colin Firth) along with Schofield for an urgent task. A battalion of 1,600 soldiers led by Colonel Mackenzie (Benedict Cumberbatch) on the front line will be launching an attack on the retreating Germans the following morning. The Lance Corporals have been tasked to make a run across no man’s land and deliver an urgent message to Colonel Mackenzie to halt his assault as the Germans have actually led them into a trap and are prepared for their assault with a large army waiting to meet them. Amongst the 1,600 soldiers is Blake’s brother, making the mission even more critical for the young recruits to get the message delivered in time.

Mendes has collaborated with master cinematographer Roger Deakins for a fourth time (“Skyfall”, “Revolutionary Road”, “Jarhead”), delivering a unique visual treat for viewers. Deakins utilised long takes between scenes creating the effect that the entire movie was filmed in a single shot with no cuts (the truth being that there were indeed cuts and these were disguised in scenes such as explosions or flashes of light). The impact of Deakin’s cinematic craftsmanship is that the audience accompanies Blake and Schofield with a sense of ‘real time’ on their journey to the front line – seamlessly propelled forward from one adventure and dangerous predicament to the next. This immersive effect allows the viewer to be swept into the world of the trenches and the perspective of World War One soldiers – a story most of the world no longer has the luxury of hearing in person.

We feel their hesitation with every step forward into abandoned enemy territory, fearing what may lie ahead. We look over the horizon from their line of sight wanting all hidden dangers to become apparent. We feel the claustrophobic, narrow spaces of the dark tunnels and passageways in bunkers and winding trenches that seem to continue for an age. It’s a brilliant visual exercise in the appreciation of time and scale and a realisation of a unique aspect of war that is usually only recounted in heroic literature.

With the use of the one-shot effect however, comes the challenge to ensure a script that continues to engage even in between each act and scene of the film. This is where the film slightly falters. The script becomes clunky at times during the transition phases – where Blake and Schofield are walking between destinations. In other moments, it becomes unnecessarily verbose. Whilst arguably Mendes is reflecting a real life scenario where soldiers may indeed have to pass the time in superfluous banter, it doesn’t quite work in a two-hour film. There are similarly some implausible events which are clearly there to give the film some increased dramatic tension. Again, they are only minor quibbles and it doesn’t take away from the overall quality of the film. Indeed one remains emotionally engaged throughout.

The senses are heightened even further with the delicious lathering of a most gripping score courtesy of the creative genius that is Thomas Newman. Each iteration of the soldiers’ journey is swathed in musical purpose that captures the very emotions sought by Mendes and immerses one further into his tale. Newman thoroughly deserves recognition in the form of an Oscar nomination alongside his colleagues in Mendes and Deakins for their respective efforts in this film.

Adding to the brilliance of the film are the excellent cast of supporting performances. Cumberbatch and Firth are joined by Richard Madden (playing Blake’s brother Lieutenant Blake), Andrew Scott (as Lieutenant Leslie) and Mark Strong (as Captain Smith). While these supporting roles are all quite minor, their addition provides the reminder of the cruel nature of warfare during such large-scale undertakings. The world does not see individuals in a battalion of soldiers. Soldiers and officers of all levels enter and exit fleetingly. Paths cross. Lives are intertwined yet separated through death and destruction or orders from a distant or even an absent leader. Mendes introduces these supporting characters with a sense of urgency and their impact snatches us away from our otherwise constant concentration on Blake and Schofield. And as quickly as our attention is diverted, it is focussed again on Blake or Schofield as they continue their mission.

And yet, through this journey, we discover some depth to the two protagonists. We unearth truths and their back-story to argue against the very notion that there are no individuals in war. We are reminded that there is a story to every individual and their contribution to the defence of their cause really makes their effort the ultimate sacrifice.