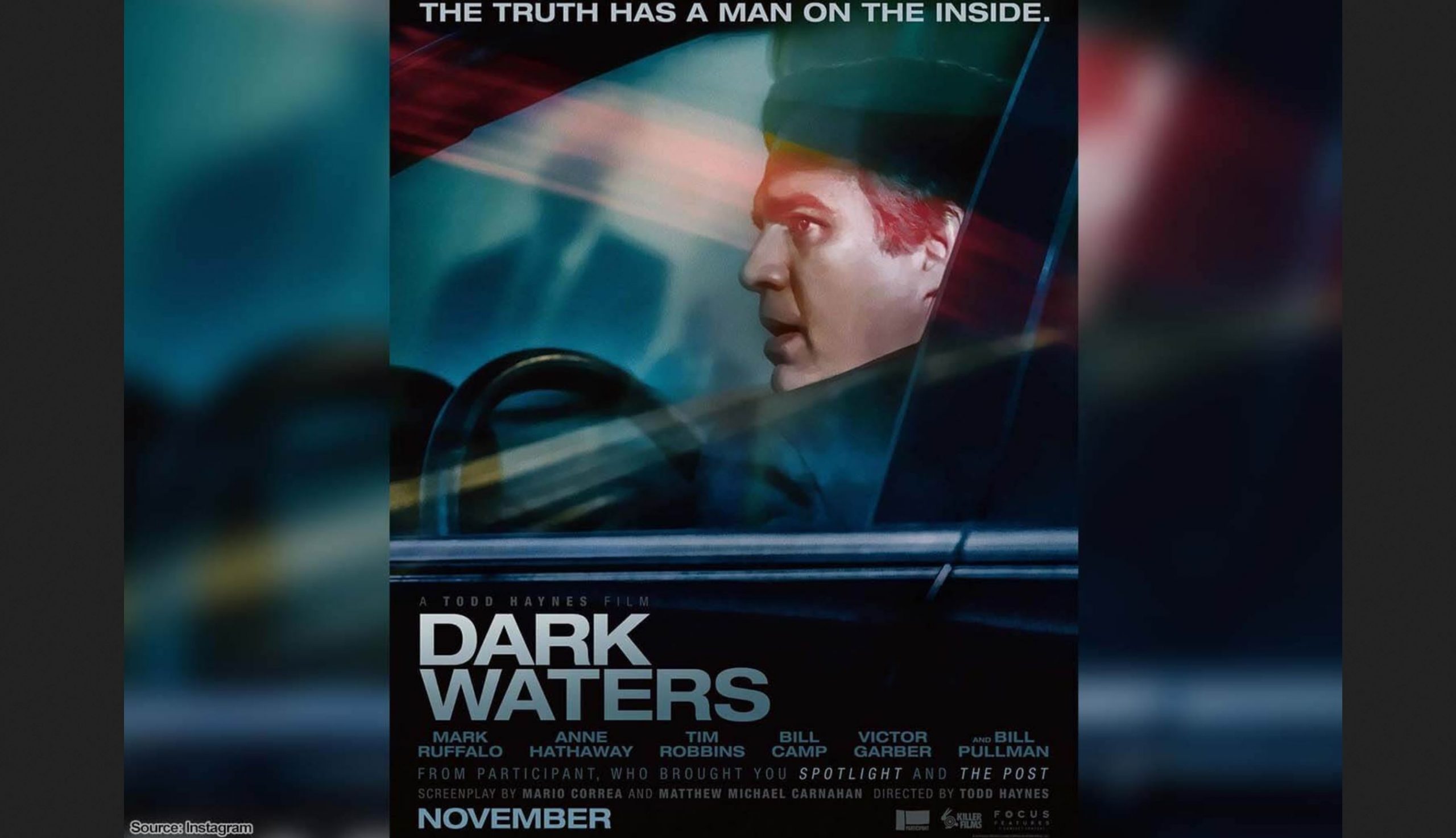 C8 is in about 98% of the human population and so few know anything about it. The frightening thing, even if that 98% knew about it, there’s nothing that can be done and only a handful of people are willing to change that. Dark Waters is the story of how one man, Rob Bilott, sacrifices his health, family and job with his obsession to bring justice to all those subject to the crimes of chemicals company DuPont.

When a farmer, Wilbur, with a farm of 190 healthy and strong cattle slowly die off, questions are asked. It’s not hard to know the DuPont factory close by will have something to do with it, but Wilbur has hit a block when no local lawyer will help him with his case.

Wilbur happens to know Rob Bilott’s mother who suggests he visit him in Cincinnati. The hotshot corporate lawyer usually works helping big-name companies and, in the past, the firm has had ties with DuPont. But when the issue becomes personal, Bilott becomes somewhat obsessed and convinces his firm to help.

Asking too many questions and digging a little too deep, DuPont attempts to drown Bilott in paperwork. But with perseverance and science on his side, Bilott manages little wins. DuPont tries harder and harder to cover up what it is they have done, not only to the small town of Parkersburg but ultimately every living thing in the world.

Directed by Todd Haynes (Velvet Goldmine, Carol, I’m Not There) Haynes manages to bring a long-winded and exceptionally complicated story to the big screen. Haynes was helped with passion and drive from lead actor Mark Ruffalo (Avengers, Now You See Me, The Kids Are All Right) who has a long history regarding environmental activism. Together the two have also attended parliament to help bring a stop to the use of the chemicals they talk about in the film.

If you can look past Ruffalo as the Hulk and think back to his days before the Avengers, he is a rather talented character-driven actor. Dark Waters is no exception as he finds even the smallest of personality traits and mannerisms and applies them to every scene he does. The thing Ruffalo manages to capture is the distance he can put himself at. There are a number of scenes where you can see his mind is a million miles away thinking about his next step.

Dark Waters does tend to run a little slow which is exactly how the story is paced. It took over seven years before Billot was able to see a return for his hard work. Despite the slow pace of the film, there is something unsettling and suspenseful as the story progresses. While it’s a political drama at its core, there is a thriller aspect to it as well. Ultimately, it feels the same as the Julia Roberts hit, Erin Brockovich.

Overall, Dark Waters is the film everyone should see and talk about. It will leave you feeling unsettled at the prospect of how much damage this man-made chemical has done, even in Australia alone. With an outstanding performance from Ruffalo and what feels like precision direction from Haynes, Dark Waters will hopefully make a change to how chemicals are treated and disposed of.