Review - All Is True 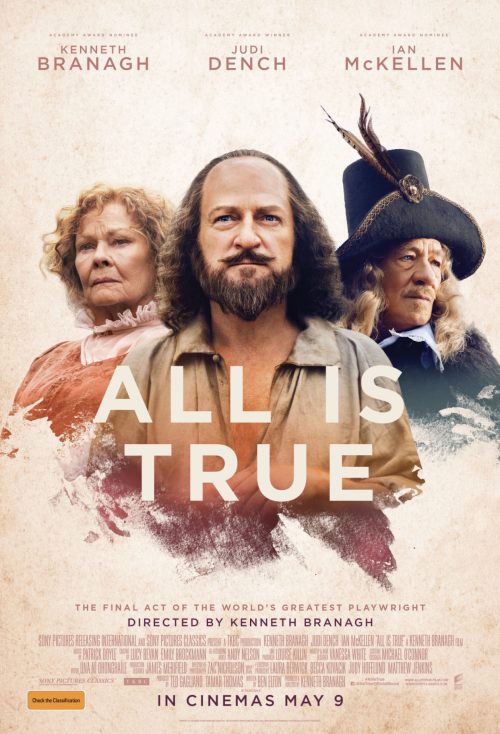 Sony Classics‘ All Is True will mostly command the interest of older art house film connoisseurs, but at least this crowd will respect Kenneth Branagh‘s directorial effort. His domestic drama is a respectable take on William Shakespeare‘s final years.

This isn’t Branagh’s first Shakespeare telling, so it’s fair to say he probably knows more than you and me about the man and his work. He’s directed five other films based on plays and also acted in each one of them. Little is known about who the English language’s greatest dramatist really was. This film is more based on speculations about the final three years of the iconic writer’s life.

The Globe Theatre burned down, after being in business for 14 years, during a performance of All Is True – the original title of a play believed to have been written by Shakespeare and John Fletcher that a decade later was renamed Henry VIII. Our well known playwright feels defeated by the destruction of his theatre and retreats to rejoin his wife and two daughters, who he has barely seen in the last 20 years.

A lot of exposition, with scene after scene devoted to one subject at a time. We see William doing some gardening and thinking about his late son Hamnet, who died at age 11 about a decade earlier. His wife (Judi Dench) thinks his sudden arrival disrupts their peaceful life. And we also get to see the true intentions of some angry, radical Puritans. They accuse William’s daughter Susanna (Lydia Wilson) of being unfaithful to her husband John (Hadley Fraser). Then there’s Will’s unmarried illiterate younger daughter Judith (Kathryn Wilder), who has always believed her father had rather seen her die than her twin brother.

Drama unfolds within the Shakespeare household, with enough resentment throughout the family to keep the story going for another hour. Anne has lived so many years without her husband, that she doesn’t really wants him around anymore. His daughters are struggling with what’s going on in their lives and also the things that happened in the past run parallel with William’s pain in his heart, dying to know the truth about his son’s death.

The entire story is pretty straight forward without any sense of complexity. The only problem this film clearly has is the casting of Dame Judi Dench in the role of Anne Hathaway. It’s well known that pregnant Hathaway was a few years older than Shakespeare, when they got married. But Dench and Branagh’s age difference is a bit of a stretch – she could easily play his mother and she’s usually a lot stronger and commanding in her roles, here she lacks any presence. Branagh on the other hand looks like the man himself, sloping nose, moustache, beard and receding hairline. He’s not making the story just about himself to show how well an actor he is, but his directorial efforts should definitely be applauded. You can tell he knows the value of a strong supporting cast. Wilson and Wilder both are great in their roles as Shakespeare’s daughters, but it’s Wilder who is the true scene stealer and I truly want to see her in more period pieces in the near future.

Many of the brighter daylight scenes reminded me of paintings from this time period, changing into different styles with the amount of light that seeps through the cracks of the doors and even when there’s barely any light to see anything it’s still mesmerising. Everything has an artistic flare that makes All Is True a true visual accomplishment. If only the story was as remarkable, I would still remember it a few days from now.

All Is True will play in select Australian cinemas from Thursday May 9.