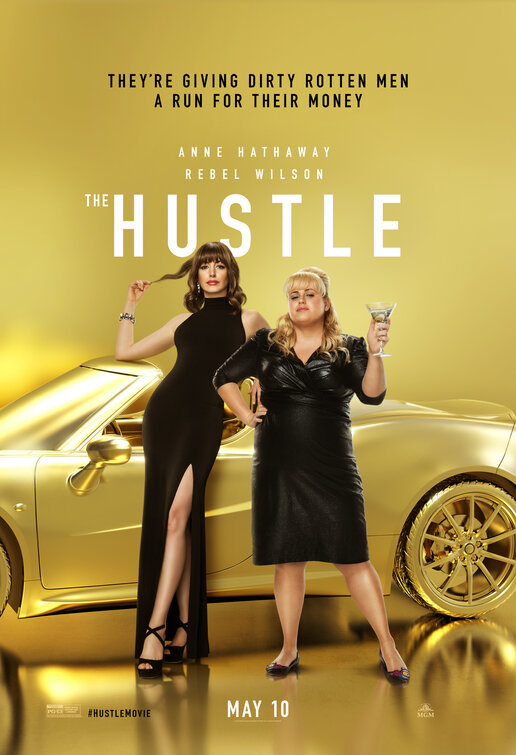 It is common practice in Hollywood to invest in remaking an old film. Giving it a new cast and a modernised twist seems like it is almost a quarter of the films released every year. The Hustle starring Anne Hathaway and Rebel Wilson slots right into that category. Based on the 1988 classic, Dirty Rotten Scoundrels starring Michael Caine and Steve Martin which is then based on the 1964 film Bedtime Story, there isn’t a whole lot that’s different. But for an entirely new generation who don’t know who Caine or Martin are, The Hustle is entertaining even if the humous is a little dated.

When two scam artists cross paths on a train to France neither expected to have to compete for work at the end of the line. But that’s exactly what happened when Josephine (Anne Hathaway) and Lonnie (Rebel Wilson) end up hustling the same town on the French Riviera. Hoping to get rid of Lonnie, Josephine agrees to show her a trick or two and team up together in a curious attempt to lure men in for extravagant engagement rings only to then realise it’s not what it seems.

But when Josephine and Lonnie have a falling out over money, they battle it out to be the sole hustler. After fruitless attempts for either of them to move on they decide a competition will be their deciding factor once and for all. The mark is made and the two go to work to scam a tech millionaire Thomas (Alex Sharp) of his millions. But when feelings get in the way the bet is off does the final twist of them all sends everyone home and out of pocket.

The film follows a very classical humour, something you would expect from an early 2000s comedy. It’s very much a romantic comedy where the humour is forced and set up. It isn’t clever and doesn’t tend to try anything adventurous. As expected, Rebel Wilson brings her trademark delivery which the film tends to ride on.

Of the most recent handful of films Rebel Wilson (Isn’t it Romantic, Pitch Perfect, Bridesmaids) has starred in, she has given the same Australian character with her unique style of comedy and delivery. Playing her character Lonnie is no different. While the character is written to be of a lower-class background Wilson does tend to play up to it rather well. However, the humour does tend to run thin with the similar delivery of her jokes on repeat throughout the film.

Where Wilson does manage to showcase some actual talent is in her scenes with Alex Sharp who plays Thomas. She happens to tap into something a little more sincere and relatable than that of her whimsical humour which saturates the remainder of the film.

Anne Hathaway (Ocean’s Eight, The Intern, Les Misérables) as Josephine brings a particular level of class and talent to the film. While it is questionable why she would have agreed to such a film, having someone with her level of character performance is welcomed. There isn’t a great deal of depth to the character of Josephine however, Hathaway manages to have a bit of fun with it.

Overall The Hustle isn’t anything new, but it’s still a lot of fun. For audiences who have seen Dirty Rotten Scoundrels before, it will be a great trip down memory lane. For new audiences, it will have you giggling all the way through as these two unlikely actresses grace the screen.

Like Loading...
Newsletter Signup
In this article:2019, anne hathaway, mgm, movie review, movies with jay, The Hustle, uiniversal movies, universal pics
Up Next:

Review – All Is True