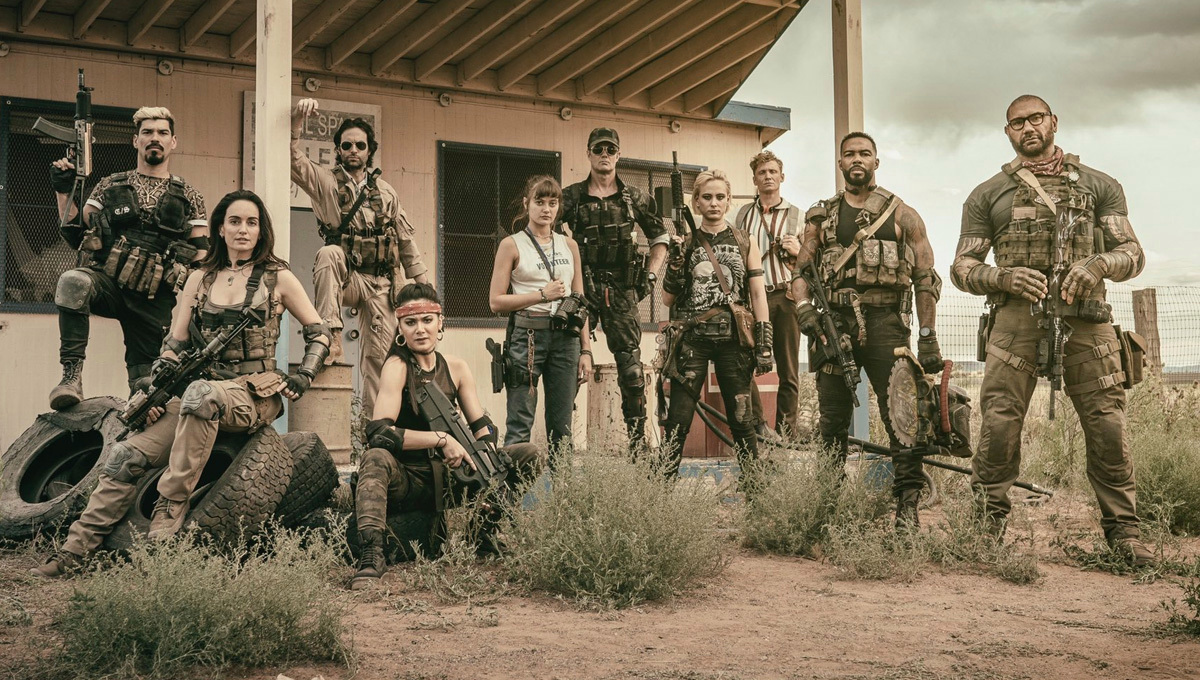 Heading back into somewhat familiar territory following his 2004 directorial debut, Dawn of the Dead, writer/director Zack Snyder has crafted a bloody, fun and ridiculously original take on the ‘zombie’ genre with the latest Netflix original, Army of the Dead.

While AOTD starts off with the generic trope of a zombie-movie (a zombie escapes military confinement and sets its sights ahead on the blinding lights of Vegas to cause mass carnage), it is the subtle mannerisms and tone of this certain zombie’s actions as he violently (and bloodily) escapes his captors that provides the first glimpse at a movie that wants to try something more bold and brash than anything audiences have seen in this genre before. And for the most part… Snyder and AOTD succeeds.

After a whirlwind of insanity that is the opening credits montage showing the destruction of Las Vegas (in typical slow-motion Snyder style, complete with an alternative take on the song ‘Viva Las Vegas’), we are introduced to Scott Ward – a bear-sized man (played by Dave Bautista) flipping burgers years after Las Vegas has been literally walled-off by shipping container to the rest of Nevada, ultimately containing the zombie spread. Inside his burger joint, Ward is propositioned by Bly Tanaka (Hiroyuki Sanada, Mortal Kombat) – a mysterious man with a once in a lifetime offer – gather a team to infiltrate the zombie-ridden Las Vegas, to steal $200 million from an underground casino vault, all before the US government drop a tactical nuclear bomb on the desolate city in 4 days’ time. Now, that is a premise and a half.

Once the heist begins (almost an hour into the film) – that’s where the true excitement begins. Snyder does not hold back when it comes to violence, gore and some pretty damn creative ideas to make AOTD feel like something fresh and original. Zombies are getting obliterated by bullets, grenades, knives and hell, even just getting plain thrown into concrete walls by the hulking Bautista (who unfortunately comes close too, but never actually Batista Bombs any zombies)! It’s violence galore and definitely most welcomed in this film. On the flip side, the zombies are also responsible for some grotesque killings, creating an atmosphere that will kill off any character at any time to keep audiences on their toes.

There is one element of this violence that pays off incredibly well, and that comes from the zombie tiger that was very much discussed after its reveal in the trailer. The tiger spends most of the runtime lurking around every corner, posing as nothing but a severe threat to our heist-team. But when the tiger is (figuratively) let off the leash too attack, it makes for one of the movies more toe-clenching violent moments, going full Carole-Baskin-husband-killing style on a unsuspecting character.

With even what seems like full creative control given to Snyder by Netflix for this film, there are still character elements that do suffer from being underdeveloped and performances that are noticeably weaker than others. This is at its most noticeable when Snyder attempts to hit the more “human” moments of the story, creating relationships between team members that don’t always work or feel a bit too much like filler. With the film clocking in at almost 2 and a half hours, these scenes are hard to get connected too when it seems cutting them out of the film wouldn’t have been a detriment to the runtime or the story. However, the comedic relief in the characters and performances of Schweighofer as Dieter and Notaro as Marianne were undoubtedly highlights of the film.

However, in an ironic turn, Snyder takes a bold path in creating personality and story arcs for the zombies themselves, specifically a species of zombies called ‘Alphas’ who have humanistic traits, such as the ability to communicate through their snarls or rather than eating any human that comes before them, instead using them as vessels to transform into other zombies to increase the strength of their own army. The film’s subplot between two zombies (credited as Alpha King and Queen) carried more emotional weight than some human relationships in the film. And with the zombie character named Zeus being the primary threat in the film’s third act – added more tension and thrills than any mass horde of the undead.

One major gripe that I had with the film is the choice of cinematography. Snyder himself serves as the director of photography – and for the most part, pulls off some incredible looking shots and set pieces. But for most of the first half of the film, he uses such a sharp and tight lens that only focuses heavily on close ups of characters faces, or sometimes, not focusing on anything at all, leaving a blurry image on the screen for oddly prolonged amounts of time. While it never feels detrimental to the story or the film’s aesthetic, it’s noticeable enough to feel occasionally annoying.

Overall, Snyder has made a damn fun, blood-filled adventure with Army of the Dead, that will most certainly appease fans of this genre. A fresh and original concept mixed with the elements of the ‘zombie-film’ that we all love outweighs the typical flaws we normally come to find in a Zack Snyder film.