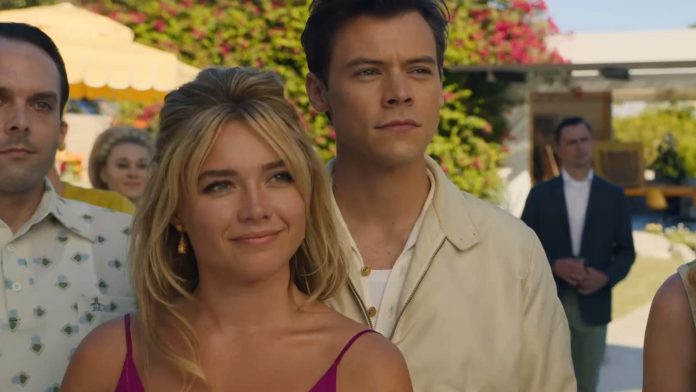 Olivia Wilde’s second film as director offers spectacle and style with an incredible score and performances from Florence Pugh and Chris Pine. While the story doesn’t always stick the landing, there is enough fun and flashy mystery here to keep you engaged for the two-hour runtime before the all-too-late reveal at the film’s end. A lot has been said about this movie’s production and incidents during its press tour, it is incredibly difficult not to have that in the forefront of your mind when watching this film. Fortunately, Pugh is such a powerhouse that all of this washes away in the first fifteen minutes of the film.

Set in the new settlement of Victory, a suburban paradise surrounded by desert, the distinctive 1950’s style houses in the perfectly manicured cul-de-sac are populated by couples and families who have regressed to a time when men went to the office during the day and women stayed at home and cooked and cleaned. Alice (Pugh) and her husband Jack (Harry Styles) are still in their honeymoon phase. Attending dinner parties at night, drinking cocktails and gardening during the day, it paints a perfect picture of suburban life in Victory. Things start coming undone with Alice suspects that not everything is as it looks. Victory’s founder Frank (Chris Pine), and wife Shelley (Gemma Chan) are the heads of the colony and do their best to keep any suspicions in check. When Alice starts hallucinating, the very fabric of Victory begins to unravel. 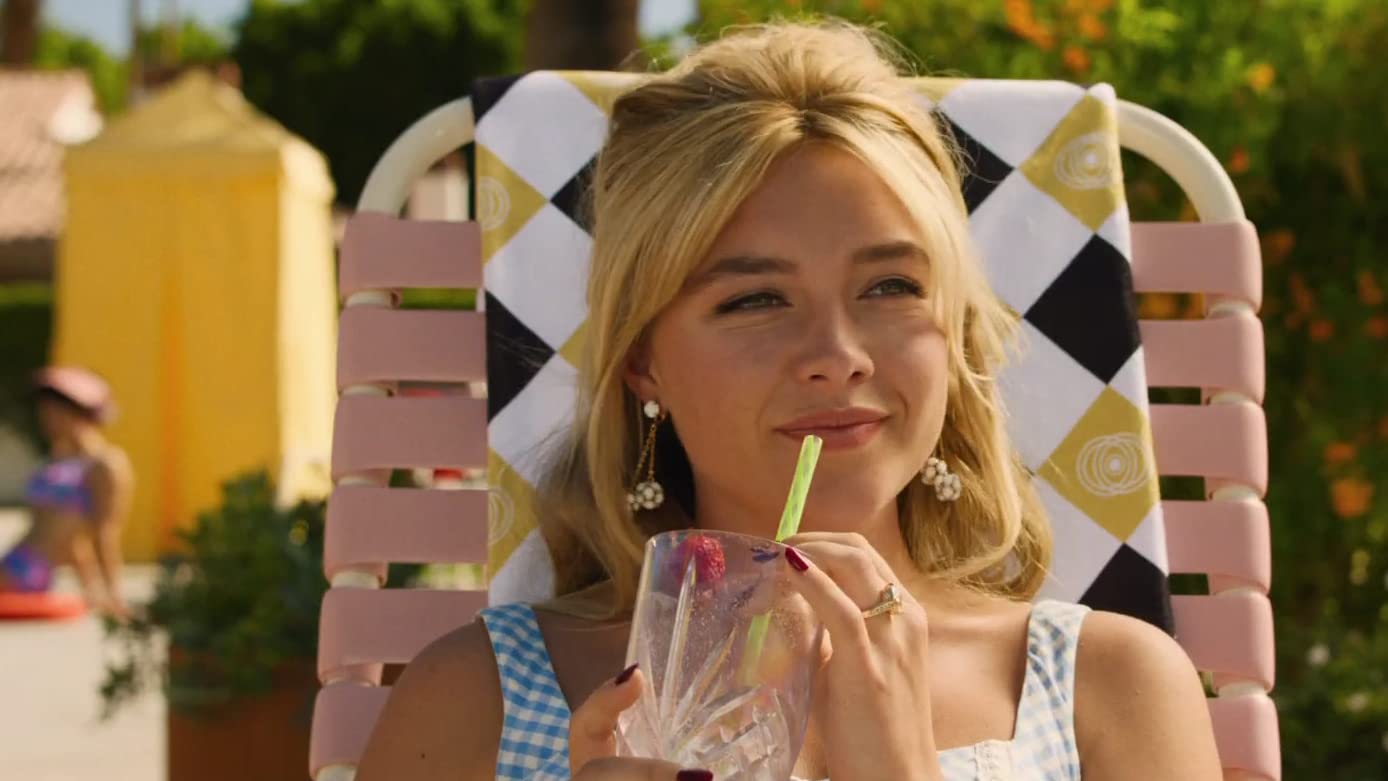 Wilde proves herself a phenomenal director with this film. Taking a huge change from her previous film Booksmart, Darling is a lush and rich world with a bold colour palette that dazzles. From the perfectly manicured world of Victory to the characters’ outfits, everything is beautiful to look at. This is complemented by the incredibly haunting score from John Powell that wails against the splashy visuals. The unrelenting pain you can hear in the score emanates as Alice’s mind begins to comprehend the situation she is in. It’s such a beautifully presented film that more than makes up for the shortfalls of the script.

The reveal happens far too late in the film for it to be anything but disappointing. By the end, you kind of have an idea of what could be happening, and while this is only explained in the barest of forms, leaving a lot of questions unanswered, the lead-up to the reveal is a thrilling action sequence similar to The Matrix and Ready Player One. Harry Styles delivers a mostly one-note performance as the perfect husband. He has great chemistry with Pugh, and the intensely romantic and sex scenes really sell them as a couple. When the role calls for more dramatic lines and screams is when Styles comes undone a little, and his in-experience shines through. That being said, Styles is a drawcard for the film, and his legion of fans will no doubt flock to see this. 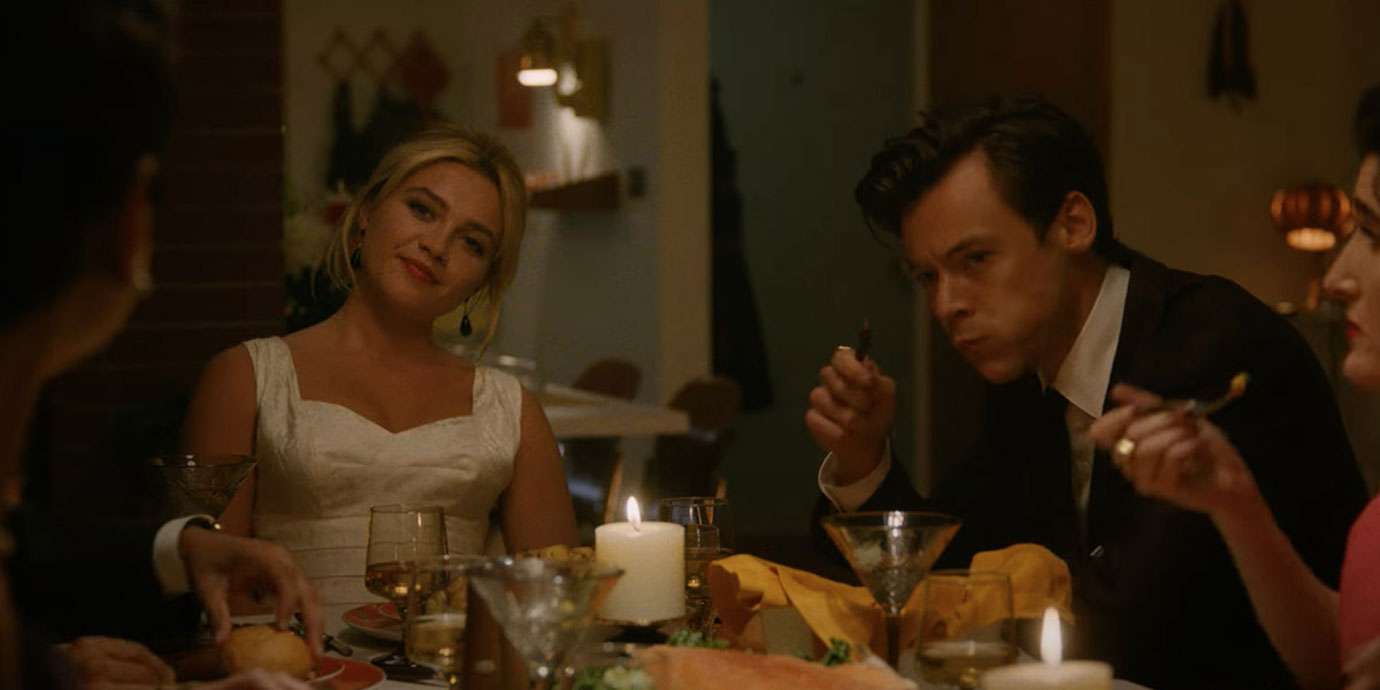 Don’t Worry Darling takes a classic tale and gives it an updated twist that will strike a chord with modern audiences. While the critics are ripping this movie apart for its story issues, general audiences will fall in love with Pugh and Styles and the splashy world of Victory. The stunning visuals and score will linger longer than the beats of the story do, and while some may see this as a complete failure, it does prove that sometimes style over substance can work.

Don’t Worry Darling is in Australian cinemas on the 6th of October with advance screenings this weekend.

Olivia Wilde's second film as director offers spectacle and style with an incredible score and performances from Florence Pugh and Chris Pine. While the story doesn't always stick the landing, there is enough fun and flashy mystery here to keep you engaged for the...Review - Don't Worry Darling