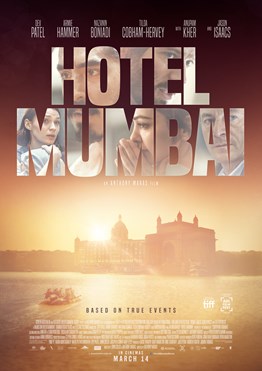 The concept and execution of a terrorist attack is something you would only ever expect to see in a movie because there’s no attachment to the physical action, it’s just an idea. But even after the biggest terror attack on human kind, the 2001 New York Twin Towers attack, there was a devastating and horrible attack on Mumbai, India in 2008.

174 people died including 9 of the 10 terrorists and over 300 were injured as they attacked 12 locations across Mumbai lasting 4 days. But from this tragedy is a story of hope, love and sacrifice which developed at the Taj Hotel.

Arjun (Dev Patel) is getting ready for work paying attention to the finest detail of his appearance as he heads to one of Mumbai’s most prestigious hotels, the Taj Hotel. He picks up his daughter to take to his wife because his sister in-law is sick and couldn’t look after the baby. But as he bends down his shoes fall out of his back pack without him realising.

Already late for work Arjan (Dev Patel) is told to go home due to his lack of shoes. Out of desperation to work the shift as he has a young family and another child on the way, Head Chef Oberoi (Anupam Kher) let’s him borrow his spare shoes though a few sizes too small. How different his life would have been should he gone home as he was told.

A group of men arrive by boat to the shores of Mumbai each getting into different cabs taking them across the city. Encouraged by a mysterious voice on the other end of the mobile phone they are all connected to, the men attack innocent civilians across 12 locations in Mumbai, one being the beautiful Taj Hotel.

In an attempt to protect the guests, many of which are high profile, Arjan and other staff do their best to shuttle guests into safe locations using staff only access points. While some guests manage to get ushered to safety a large number were killed at gun point as the terrorists moved floor to floor killing and targeting foreigners.

One of the guests is American, David (Armie Hammer) who desperately tries to get back to his room to keep his new born safe. Being American makes him a target and his attempt to save his wife, sister in-law and baby isn’t an easy task.

There is an eerie feeling that comes with watching Hotel Mumbai. Because there is this horrible reality to what you’re seeing on the screen, there’s an added suspense and connection to everything that is unfolding.

The story is about the horrible tragedy of the terror attack. But on the flip side it’s also about these amazing strong individuals who sacrificed their lives to save others. It is about moving past the tragedy and starting again to show these terrorist groups that the horrible and unthinkable actions they did haven’t changed how amazing and strong people can be, just like the staff of the Taj Hotel.

Dev Patel (Lion, The Newsroom, The Best Exotic Marigold Hotel) leads as Arjun with a wonderful loving family man who craves to make the world a better place. He has nothing but love and hope and it can be felt through his performance. While the role doesn’t call for any real depth to his performance, he is easy to connect with.

The other standout performance is Armie Hammer (Call Me by Your Name, The Man from U.N.C.L.E, The Social Network) who plays David. David plays a new husband and first-time father in a different city than he is used to. You can tell he is consuming all these new changes and distractions. Hammer manages to tap into what can only be an alpha male desire to protect his family. He captures that American in a foreign city perfectly and you can tell he is calculating his options as he deals with the terrorists.

Finally, Nazanin Boniadi (Homeland, Scandal, How I Met Your Mother) who plays Zahra, Davids wife. Boniadi is a mother who has no control over her child’s fate nor her husbands. As she is ushered room to room for her safety you can read her frustration and almost see her planning out her next step. Only when she sees her husband die in front of her can you really see her true pain that starts to stir emotion with the viewer.

Overall, Hotel Mumbai is a horrible account of the events that took place at Hotel Taj in the 2008 terrorist attacks. It uses a blend of re-enactments with superb performances while also using actual footage from the events that unfolded over the 4 days. It is suspenseful and sometimes a little hard to digest. But overall a wonderful show of courage and how one hotel can be a beacon of hope in an otherwise terrible and horrid ordeal.