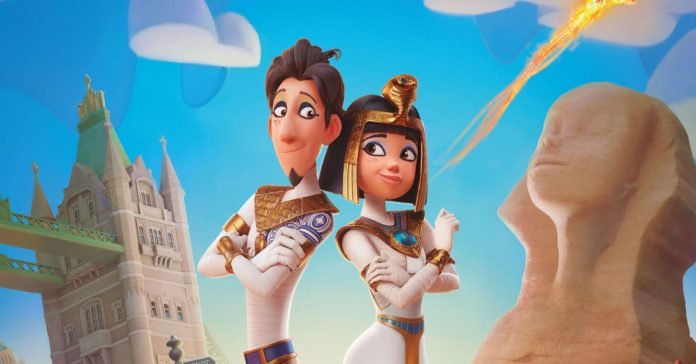 Animated film Mummies is the English dubbed version of a Spanish made film about ancient Egyptians who travel to modern-day London and features a prominent song from Canadian rock-band, Nickelback… but more about that later in the review.

Unfortunately, Mummies does very little to feel like an exciting animated romp. Moreso, it comes off as an early 2000s, direct-to-DVD, bargain shop price movie that leaves no impression once the credits roll. Not every film can be Pixar, I guess. 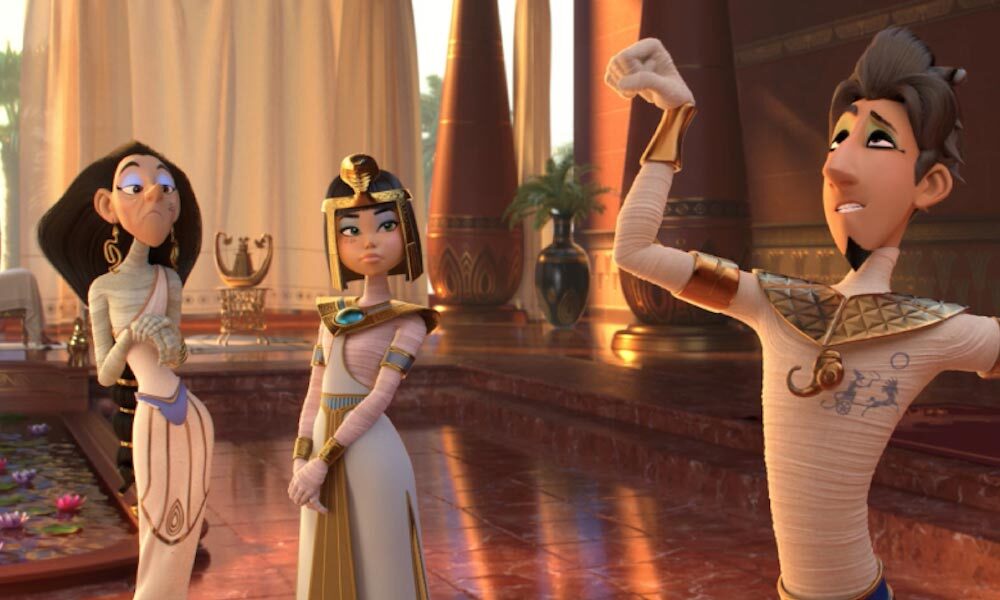 Back in Ancient Egypt, a famous and beloved chariot driver, Thut (voiced by The Inbetweeners’ Joe Thomas), sadly has his life cut short in a very non-morbid, child-friendly manner. Now mummified and hustling to maintain his celebrity status in the afterlife, Thut still dreams of being able to return to the real world and once more get behind the reigns of a chariot and be adored by his fans.

As Thut dreams of days gone by, fellow afterlife dweller, Princess Nefer (Elanor Tomlinson), wishes for a life outside the bounds of her father, the Pharoah (Sean Bean). A life in which she can be a singer (as told to the audience by a sudden burst into the film’s only staged musical number). However, his Pharoah’s father has other plans for her and releases a fiery phoenix to determine a husband for Nefer. As the phoenix takes flight, it is accidentally knocked down by Thut’s younger brother, thus declaring Thut and Nefer to marry, much to the protest of the princess.

As preparations for the wedding commence, a campy, moustache-twirling, British archaeologist, Lord Carnaby (Hugh Bonneville, Downton Abbey) is searching in modern-day Egypt for a priceless ring to place in his museum exhibit. However, his journey leads him to a portal between his world and the afterlife and grants him access to the ring. The ring of which is a prized possession of Nefer.

Teaming up with Thut and his brother, Nefer discovers the portal opened by Lord Carnaby and the trio travel to modern-day London in search of the ring. But as they acclimate to this brand new world, and the opportunity of dreams unfulfilled emerge in front of them, the three must decide whether they stay in London, or go back home.

That brief synopsis is a bare-bones foundation of what Mummies manages to cover in its short, 88-minute run-time. Right from the get-go, this chaotic and unhinged energy to introduce characters and plot points, plus the attempt at playing out a gag-a-minute makes the film feel incredibly manic. It’s almost as if the writing team had a list of everything that would play well in a film made for children, and by throwing caution to the wind, making sure every single element made it into this script. There’s action, humour, musical numbers, romance, a silly animal sidekick, heroes, villains… the list goes on and on. But none of it is constructed together in a cohesive manner.

I have to give props to the filmmaking team behind this film because even though Mummies doesn’t hit anywhere close to the heights of the animated films that bless our silver screens today, there are some ambitious choices that are made in an attempt to fuel the story with even more “excitement”.

A character that is introduced to the trio of mummies in London is Ed (voiced by musician, Shakka). Ed is a happy-go-lucky, mid-20s, up-and-coming music producer who finds it necessary to shout every single word that comes out of his mouth with the passion and energy of a million men. His disco-themed apartment/recording studio serves as a home to the mummies while they’re in London and often makes you wonder how a struggling music producer can afford such a luxurious flat in London!

When Ed discovers that Nefer can sing, he entices her to write, practice, perform, record, and release a song within a 24-hour time frame. And with the singing being Nefer’s dream, of course, she obliges! The song is a hit, and overnight Nefer is now an international popstar and celebrity life causes a rift between her and Thut, who is slowly falling in love with her!

It’s around the halfway point of the film that I completely forgot about the storyline regarding Lord Carnaby and his villainous ways. I wasn’t disappointed that I had forgot, nor was I upset at the movie for its poor pacing and story structure. But when Carnaby returns in a chase scene that goes on for far too long, with very little excitement, I wished that the movie just made Ed the main character and followed him around for a day. 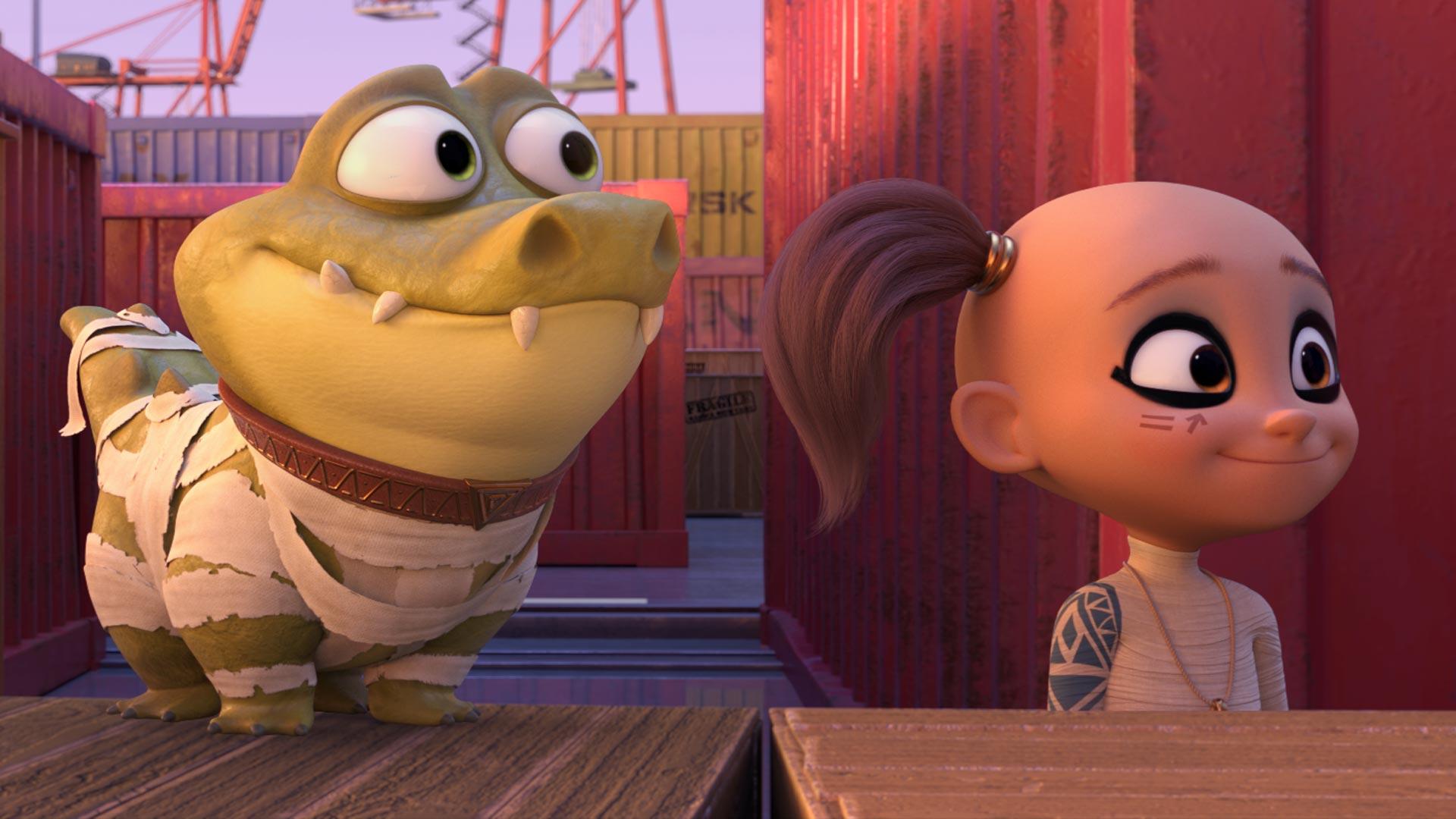 Now, the following paragraph features a small spoiler for the third act of Mummies, so proceed with caution and care. But it also features the most important and vital information that is needed for this review. Thut and Nefer return to the afterlife, and they have both learnt valuable lessons about themselves (and each other) during their time in the real world. What those lessons are… I don’t recall. The two stand before each other, eyes wide and hearts ablaze, but neither confesses their love to the other. Instead, Far Away by infamously famous rock-band, Nickelback, blared through the cinema speakers as they both turned from each other in slow motion and began to walk away, sporadically looking back over their shoulder at different times to see if the other person has stopped. What follows is a montage of loneliness and sadness that absolutely outstays its welcome. In fact, the montage last for the entire duration of Far Away (approximately 4-and-a-half minutes). I guess they really wanted to get their money’s worth out of the licensing of that song, but the filmmakers have possibly achieved the greatest needle-drop moment in cinema history.

Mummies is outrageous, incoherent and chaotic. Its animation style is decades behind what is being produced today in YouTube videos, let alone at the cinema. The voice cast often shouts out their lines rather than read them, and there are points you’ll forget certain characters are even in the film. However, it features a Nickelback song, so there’s a credit to be given there. Younger audiences (and I mean younger audiences) may get a kick out of having this on in the background when it inevitably hits a streaming service within the next  3-7 business days, but it’s not worth rushing to the cinemas to see.