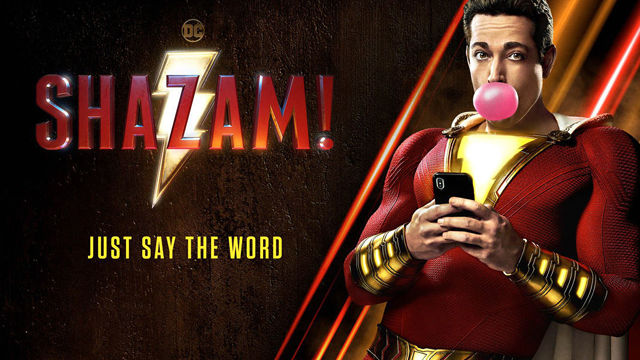 It’s here! The final film in phase 1 of the DCEU. After what can only be described as a roller coaster ride for the connected universe so far, Shazam is the most fun and joyous ride that DC have offered up so far. With a plethora of great action scenes, great humour and a little drop of horror courtesy of Annabelle’s director David F. Sandberg, Shazam! is the superhero movie that has it all.

The film follows the story of Billy Batson (Asher Angel) a foster kid who is in search of his birth mother who were separated at a carnival when he was a child. Billy has travelled through different foster homes in different counties trying to find her. When he lands in a group home he meets Freddie (Jack Dylan Grazer) and his “younger sister” Darla (Faithe Herman) who try to convince Billy to stick around. One day Billy is travelling home on the train when he is magically teleported by the wizard Shazam to his lair. They forge powers and Billy becomes the hero Shazam! (Zachary Levi) a late 20’s, maybe even 30 adult man (don’t worry you will understand when you see it!) When they are faced with Dr Thadius Sivana (Mark Strong) and the Seven Deadly Sins who want Shazam’s power to take on the world.

What really worked for this film is the contained story for a superhero film. By focusing on a family and exploring themes of what family is, allows this superhero flick to feel a lot more down to earth than other out of this world offerings of late. The film also deserves accolades for its positive portrayal of foster families and parents who actually care about those in their care, considerably compared to the often evil house parents who are only in it for the cash trope.

The cast are incredibly diverse with white, black, asian, mexican, male and female all represented equally. Recently I watched the live action version of Dumbo with horrendous performances from child actors and I thought “where are all the good child actors?” well the good news is they are all in Shazam! Angel and Grazer lead the pack with scene stealing performances which are also outdone whenever Herman appears. Not to be outdone by Levi who is the only person who could deliver this performance. His chemistry with the rest of the cast and his childlike wonder provide a hero that everyone can relate to.

Visually this film is rich and colourful while also balancing some very dark scenes that only a director like Sandberg could pull off in a family film. Particularly with the climactic battle being set in a carnival, in this way it reflects both tone and visuals with a blend of bright colour of the ferris wheel with the shadows of the seven deadly sins. The cgi transitions from Billy to Shazam are just as good as they look in the trailers and provide some great moments during the film.

The score composed by Benjamin Wallfisch is sweeping and blends well with the upbeat and catchy soundtrack with tracks from Queen and Eminem. Wallfisch has collaborated with Sandberg previously in Lights Out and Annabelle : Creation and it is great to see their collaboration continuing into the superhero genre.

Having the first villain not be Black Adam may be questionable for the first Shazam! film but it really does allow for Strong to flex his bad guy muscles. The similarities between Sivana and Batson, particularly their upbringing gives a different side to the usual villain that we see in these kinds of films. In particular his saddistic and tyrannical brand of justice doled out to his family is disturbing, by the time we get to final showdown between the two, it is completely warranted. Strong gives a Doc Oc from Spiderman like vibe and it totally works for this character. That being said it is not memorable enough to want to see more of this villain. His arc is complete by the end of the film and it would be justified to leave this character here.

Shazam was the film I was concerned for when I first heard that New Line were taking it on. Through the marketing and promotion I tried to stay positive but wasn’t sure if they could pull off the mix of humour and heart required for something different in the newly crowned ‘Worlds of DC’. Fortunately the film exceeded my expectations quickly shooting up my favourite films of the franchise so far. With many jokes and pokes at other DC heroes and franchises, the film is allowed to be playful and fun which we haven’t seen in a previous film so far (Teen Titans Go To The Movies doesn’t count!) Outstanding performances from the entire cast and a less is more approach to the CGI prove that Shazam has a solid future in film.

Shazam is released in Australian theatres on the 4th of April through Roadshow Entertainment Australia.