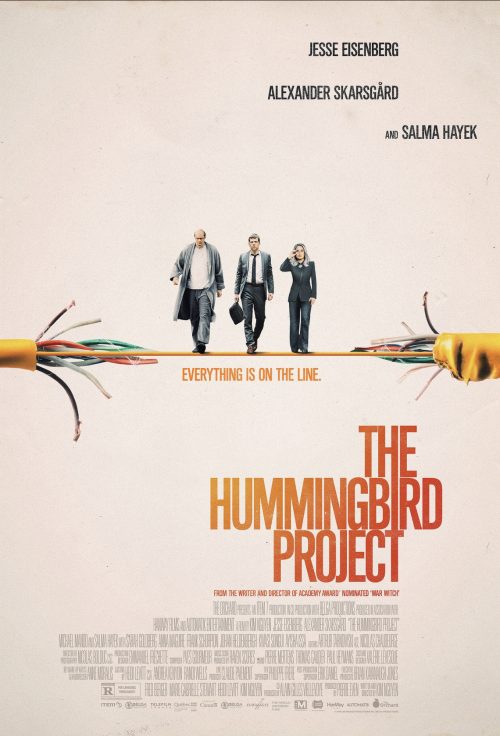 The Hummingbird Project is a tense drama/thriller with a centre of moralism. It’s about capitalism and the project’s name comes from the impressive wing speed of the titular creature. Our main characters are trying to build a fibre cable network in between Kansas and New York to get the fastest flow of data in the industry. This means big business and everyone wants to benefit from this, because even being a millisecond ahead of the competition could make you a multimillionaire.

Vincent Zaleski (Jesse Eisenberg) and his techie cousin Anton (Alexander Skarsgård in his best role to date) have come up with a plan to lay a high-speed cable under the Appalachians and other “difficult” spots between the Midwest and East Coast. Skarsgård is a wonderful actor, but in this character he’s impressive to say the least, always walking around bent over as if he’s a giant trying to fit in the crowd. He likes to be left alone in a room with his equipment and equations and might even be on the spectrum.

When Vincent gets diagnosed with stomach cancer, he refuses to undergo treatment and decides to fully dive into this project as if it’s his final task in life. While he keeps going forward with the construction of the cable, Anton stays back in his hotel room cracking codes and data and has an interesting conversation with a waitress. Some serious questions are being raised about farmers and the cable being put under their land. What do these people gain from all of this? To which he replies that they’re “irrelevant”. These questions make him think about their actions and you can see Anton slowly breaking on the inside.

Eisenberg on the other hand channels his Zuckerberg performance from The Social Network, where he talks really fast and comes across very clever. Nothing new and pretty repetitive, but nonetheless amusing to witness. It’s pretty outrageous being on death row and undergoing constant pain, while this person just keeps going until he arrives at the finish line. In the meantime he talks politicians into funding his project – since this will also benefit them and their greedy pockets – and bargaining with an Amish community that doesn’t care about money. Vincent isn’t just trying to find ways to make his project a success, but he’s also fighting off his former employer (Salma Hayek). She’s more of a supporting actor, but the real MVP of the supporting cast is actually Michael Mando as the witty engineer, who really stole every single scene he was in. I definitely am curious to see more directors casting him in bigger roles, because he has that X-factor to make a lasting impression on mainstream audiences.

The Hummingbird Project is a suspenseful thriller that keeps your attention all the way through, and some more. Skarsgård once more confirms he’s one of the best actors of the 00’s and doesn’t disappoint. He’s played different characters and roles in the last two years, and he’s making sure you won’t forget about him.

The Hummingbird Project is now playing in Australian cinemas.