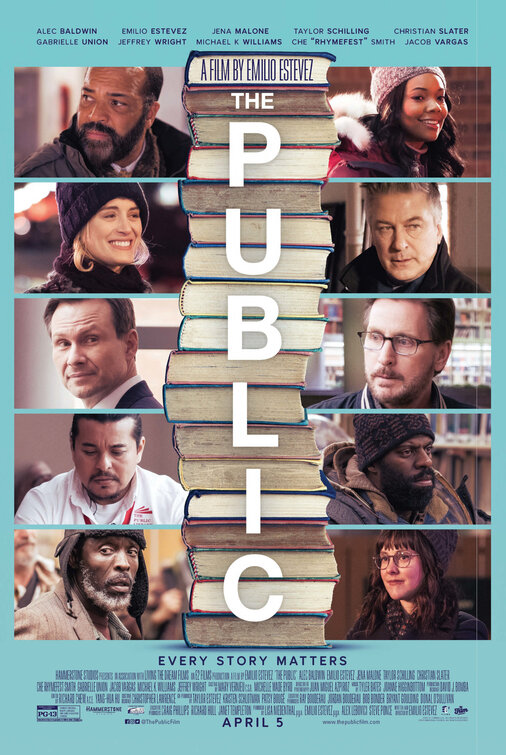 The Public is a statement film. A film about the people, for the people. But in between all that, Writer and Director Emilio Estevez managed to spread his message in a fun, open and light-hearted way. A way that makes you think for a moment, appreciate what it is you have and what it is you are watching. All in the hope of making a change.

Cincinnati public library is a common meeting point for a lot of the city’s homeless during the day. Even more when the weather can be cold and harsh. When that happens the shelters for the homeless fill quickly leaving a lot to fend for themselves on the freezing cold streets, some not making it through the night.

Stuart Goodson (Emilio Estevez) is about to close his area of the library he manages as he does every other evening. Stuart has become good friends with a lot of the homeless that visit the library seeking refuge. He has a unique way of treating them as if they were just normal patrons of the library.

With the shelters full and the library warm, Stuart is put in a tricky position. A large number of the homeless using the library have decided to stage a friendly, non-threatening occupation of the library. They don’t plan on leaving until changes are made and more shelters are provided through the cold snap gripping the city.

With Stuart’s support, they stand their ground and get the support of the public, only for the police to shut the situation down.

The beauty of The Public is in how simple it is. There’s no excessive use of locations or sets. The most part of the film is based at the state library. This helps the characters stand out and the dialogue have greater meaning.

The film is written, directed and also stars Emilio Estevez (The Breakfast Club, The Mighty Ducks, Mission Impossible). Estevez finds a way to come across as completely in control and full of compassion. And yet on the other hand slightly unhinged and full of hate. It’s this mesh of emotions and feelings that come and go and mix in between each other it’s hard to know exactly who he is.

The entire story feels as if there is a big message it’s trying to get across. A request for the government to stop looking at how politicians are received, stop thinking in short time spans and make some major changes. The way The Public gets that message across is done in a light-hearted manner. It tries to tap into the side of human compassion and want to help.

Overall The Public is an easy movie to watch. It plays with all the different levels of human and their status in society. It shows their vulnerability, strength and arrogance. Each chasing something different in life to make them happy. And it’s not always what you think it will be.