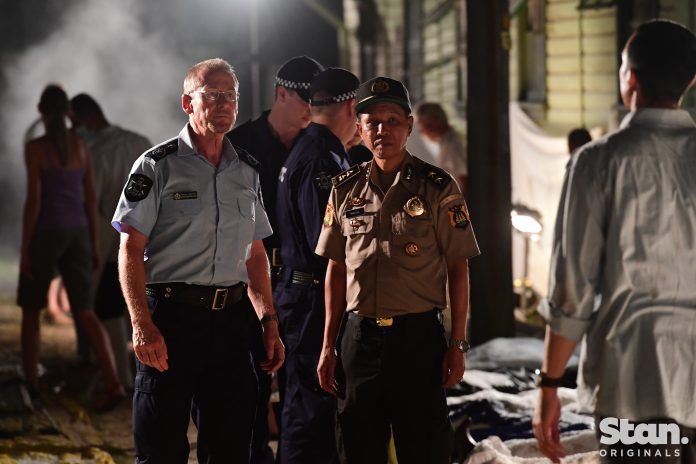 It was a dark moment in Balinese and Australian history. A devastating terror attack on October 12th, 2002, targeting two nightclubs in a tourist heavy area on the island of Bali. Balinese locals, along with many Australian and British holiday-goers scrambled to assist the injured, comfort the dying and search for the missing. 202 souls died that night, 88 of them Australian. And an island, along with the innocent people who lived on it, spent the following weeks in fear of more attacks while trying to rebuild the community that once peacefully thrived.

In the first co-production between Stan and the 9Network, Bali 2002 is a 4-part mini-series that retells the horrific events through the eyes of the survivors and the emergency responders, from both Bali and Australia, who had to defy the odds and work together to find those responsible for the traumatic chaos. 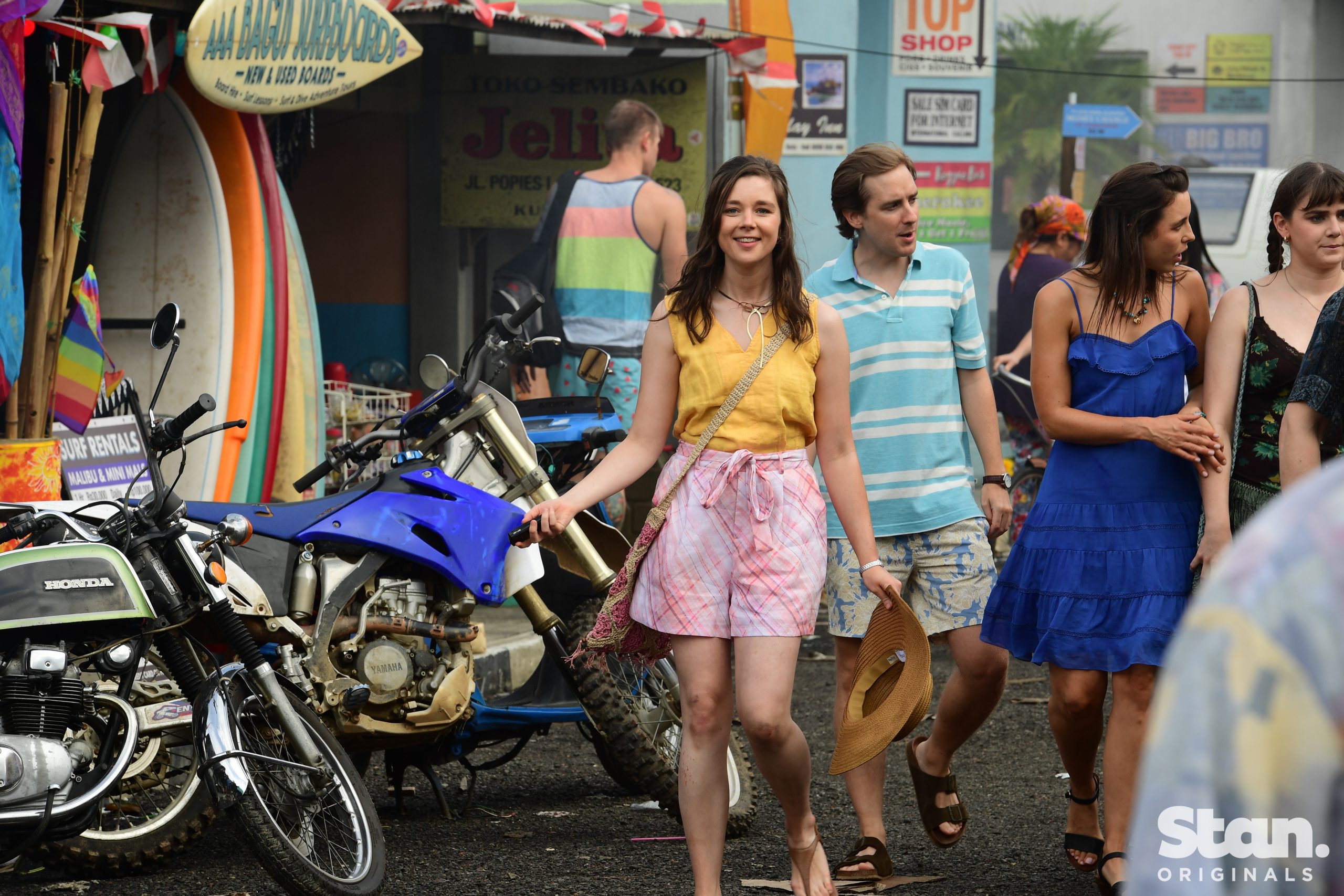 The series opens with Polly Miller (Claudia Jessie, Bridgerton), a British woman who has travelled to Bali on honeymoon with her new husband and their best friends to celebrate. Travelling at the same time is Nicole McLean (Elizabeth Cullen) and her best friend, and a duo of AFL players, including North Melbourne prospect, Jason McCartney (Sean Keenan). Alternating between their arrivals to Bali, it’s not long before the three separate groups end up partying late into the night at a popular nightclub district, as any party-going tourist would.

Unfortunately, during this time, a small group of terrorists stationed in Bali have constructed a deadly plan – to take out revenge for their revenge for Australia’s involvement with the United States in the occupation of Iraq. Their plan involves two suicide bombers, one wearing a vest inside the nightclub, and another with a car bomb outside to attack those trying to escape the initial blast. The results of their attack prove catastrophic, sending the police and hospitals, along with those who survived, into frantic chaos and confusion. 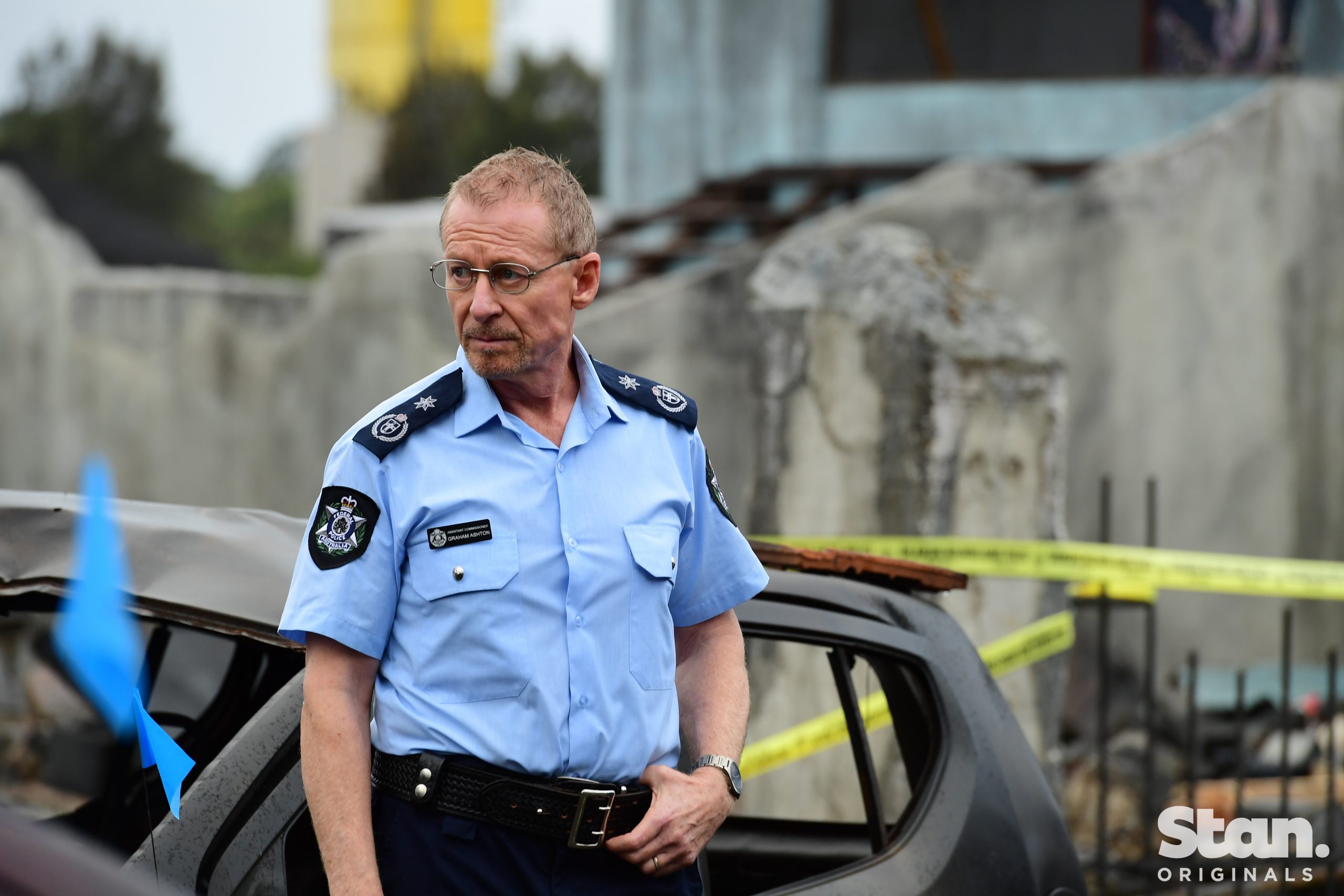 Bali 2002’s first episode is a moment-by-moment set up of the lead up to the attacks, both allowing the audience to get to know the victims of chosen focus and laying the foundation of angered frustration at the cowardice of the men responsible for the attacks. While at first, the introduction to characters like Polly, Nicole and Jason seems rushed and lacking substance, it’s not long before the episode brutally re-enacts the attack, with visceral shots of immediate destruction leaving a harrowing effect that constantly reappears throughout the series.

The following three episodes non-linearly take us back and forth from the immediate aftermath of the bombing, but also introduces burns specialist Fiona Wood (Rachel Griffiths), who has been developing a spray on skin solution for burn victims and decides to travel to Perth (where victims have been flown too after the attacks) in assist where she can. Back in Bali, Australian Federal Police Commander, Graham Ashton (Richard Roxburgh) leads a team alongside the Balinese Police to track down those responsible, but must tread a fine line when it comes to how much power and control he can show in a country that is not his own, but also a country that has suffered due to the bombings.

Each episode specifically focuses its side-plot on one of the main three characters, telling their journey from surgeries, amputations, skin grafts and all horrific unpleasantries following the attacks, all the way to their adjustments back in their home lives in Australia, and the struggles and trauma they now live with. 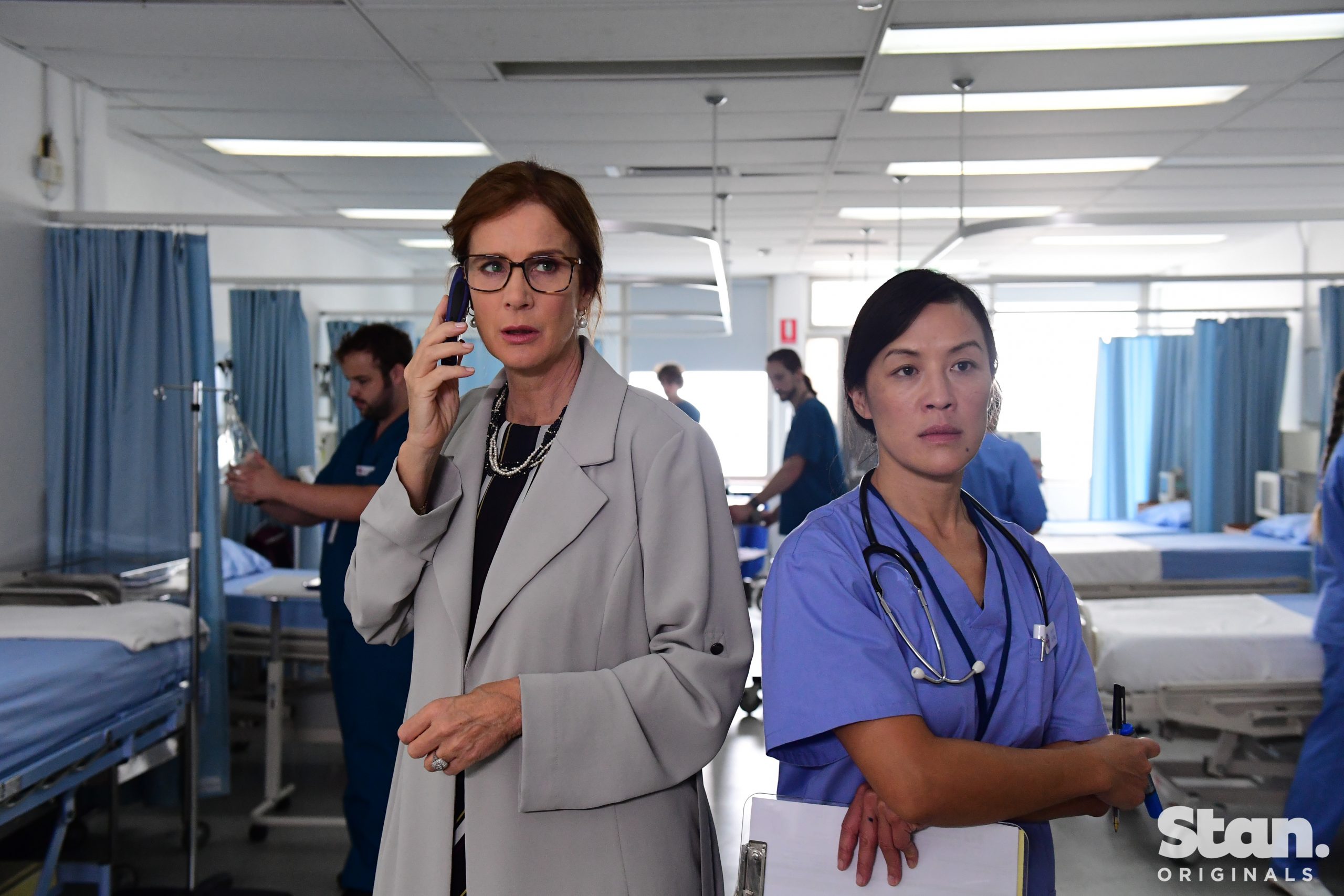 Bali 2002 has no faults when it comes to the respect and consideration of how the true tragedy is portrayed. Even at it’s most confronting and brutal, directors Peter Andrikidis and Katrina Irawati Graham only use it to the effect of accurately showing the devastation the terrorists caused, not for pure shock value. The true devastation is the gruelling aftermath, not just on a physical level, but the strenuously emotional damage caused, best shown in the moments of Polly, Nicole and Jason’s reintegration’s into their lives.

It has been heavily stated that the writing team behind the series comprehensively researched the events and conducted various interviews with survivors, medical personnel and investigators to bring as accurate of a retelling to the screen, even to the point of integrating real-life security footage, news clips and archival footage to drive home the authenticity. At some points, the dramatization doesn’t always feel as impactful as if this was a documentary. This isn’t always the case, as most of the performances ground the emotional foundations for the show, but with it’s all over the place format, information, and the understanding of when the story is taking place may have benefitted from a documentary retelling of the events. 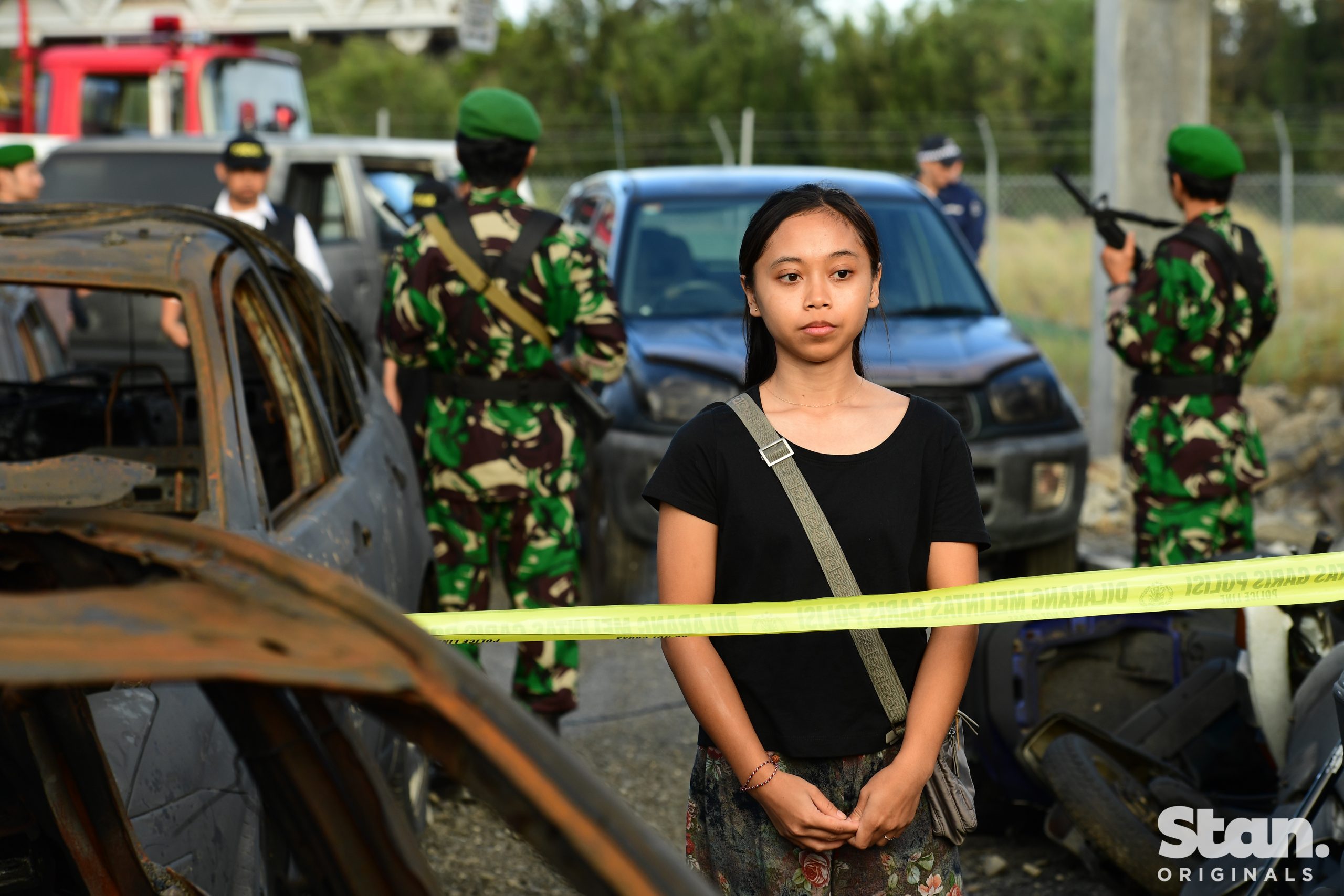 Roxburgh gives a grounded and authentic performance, and Griffiths, for the shorter amount of screen time, does make her presence known. The standout performance in the series however comes through Sri Ayu Jati Kartika, who plays a grieving widow of a bombing victim and provides incredible insight into how this attack affected the local people. Each scene, whether her grief strikes, or she needs to show strength to her children, often results in a truly heartbreaking, yet strong-willed showing of the resilience of the Balinese people in a time of terror.

The 4-episode structure attempts to cover a lot of information, over a long time period, and doesn’t always feels like gains the substantial depth to be deeply connected to any certain character, but Bali 2002 does do a riveting job of showcasing the physical and mental pain of trauma, but the hope and triumph that came in it’s defeat.

Previous article
Review – The Salt of the Earth, an Australian documentary about the founder of chicken salt!
Next article
Review : Andor Episodes 1 – 3