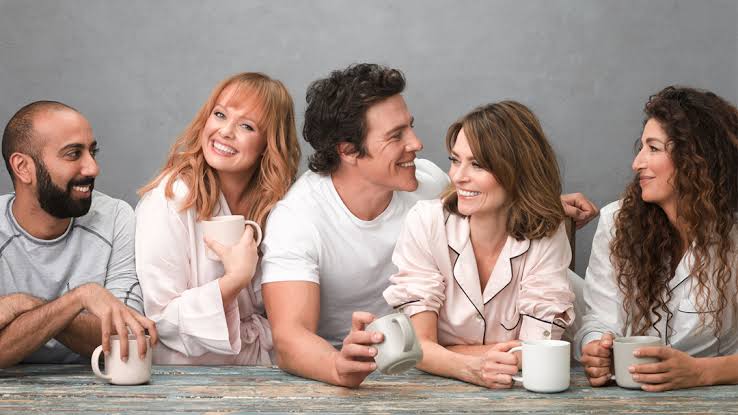 It’s been two years since we last saw the groundbreaking TV series that had 5 singles down on their luck purchase a five bedroom house together and live together as a commune. The first season was fresh, edgy and brought some new (and old) talent to the forefront of television with a great premise and promise of a fantastic show. While the first season was incredibly successful both critically and commercially, it’s been quiet ever since. Fortunately with the release of Paramount + in Australia, Five Bedrooms is back with the original cast two years for the highly anticipated second season. Fortunately time has only made this series better and the sophomore season offers up a deeper story that shows us more about these characters giving them all moments to shine.

The gang are on the hunt trying to find the perfect new place after losing out on their old house. Leading the charge is Liz (Kat Stewart) who knows exactly what she wants. In the end it is Ben (Stephen Peacocke) who is determined to get a fixed upper to make the groups new house more of a home including a brand new nursery for Ainsley (Katie Robertson) and the impending birth of her first child. Not keen on waiting for the renovations is Heather (Doris Younane) who is finally ready to start showing more public displays of affection with Ben. While the majority of the story this season is focusing on Ainsley’s upcoming birth and getting the nursery ready, there are quite a few LGBTQI centric stories this season that really stuck a chord. Seeing Harry (Roy Joseph) evolve into a more out and open gay man is by far the highlight of the season. Joining the cast as Harry’s love interest is Xavier (Josh Mackenzie) who is hilariously the victim of a setup by Harry’s mother Manju (played by the hilarious and always entertaining Kumud Merani) this all builds into an incredibly beautiful backyard Diwali celebration involving the whole house and a final episode that had me curled up into a ball sobbing my eyes out.

The writers of this show really know their characters and it shines through this season. Being able to draw on comedy from the parts of themselves that they don’t like is something that not a lot of shows get right. Here it is used as comedy and it lands every single time. Some of the highlights are Harry getting his first official boyfriend but realising that maybe more to life than the his and his relationship. Ben developing an addiction and falling into patterns that trigger Heather into being well more Heather than she ever has been and questioning her recent choices in life. Liz keeps running into her ex-husband and is trying to figure out what his life looks like now, there is definitely a part of seeing Harry happy that makes her question this and look at it closely. Ainsley is in full baby mode, but is the victim of online bullying from her baby daddy’s ex who is also pregnant with his child. Needless to say, it’s very complicated and makes for some incredibly entertaining television.

Visually this show is incredibly beautiful. Filming around Melbourne had me furiously writing down names of the cafes the group visit and trying to find out which parklands they were at. The show has a gorgeous colour palette and the team at work behind the camera know how to get the right light for the shot to look the best. A special shoutout also needs to go to the set designers who have the house looking modern while still a functioning home that five people come believably be comfortable and live in. Also Kat Stewarts wardrobe is stunning and deserves to be seen in HD!

While the long nearly two year wait is over and we finally have that second season we were hoping for, nothing has been rushed here. The show has been allowed to develop its characters and deliver a strong second season that should cement it as a staple in Australian drama for years to come. As the commune weave in and out of each others affairs, it reveals more layers about their friendship and brings them closer together to give the show the central anchor of choosing your family from your friends. This show has the perfect casting and it looks as though the group have just as much fun offset as they do when they are filming.

You can sign up to Paramount + in Australia here