Episodes: The Number of the Beast is 666 and The Wrath of the Lamb

The end has arrived. Hannibal has served its last meal and it was both magnificent and terrifying. Bryan Fuller has delivered a stunning finale that has made Hannibal a modern classic. Since the beginning, Hannibal has set itself to a high standard in regards to cinematography, editing, music/score, special effects, narrative, gore and violence, and its actors amongst others. It was self-aware enough that it could be pretentious without turning off its fans (for the most part). The final two episodes work together so well that it really is such a shame that Hannibal has been cancelled. There’s so much more that needs to be explored with the characters and we didn’t even get to The Silence of the Lambs storyline, though the latter is a good thing because it would’ve been way too ambitious for a third season that had already been split into two distinct stories. Before going on any further, a quick review of the final episodes:

The Number of the Beast is 666 Finishing William Blake’s “Red Dragon” theme, this episode set the stakes so high for the characters and the audience. Meant to be a final showdown for Dolarhyde and Will, it was really Frederick Chilton who got burned. Literally. In an attempt to capture the Red Dragon, Jack, Will and Alana plan to use Freddie Lounds’s tabloid to poke insult the “Tooth Fairy” in hopes he’ll be so outraged, he’d slip up. But as we had seen all through season 3 (and in season 2), Will couldn’t keep Hannibal out of his mind and subconsciously (or otherwise) set the scene so that Chilton would be at the receiving end of the Red Dragon’s wrath. This was a fact Hannibal caught instantly upon seeing the photograph accompanying the Tattle Crime piece.

The most interesting and shocking part of this episode is not seeing Chilton being glued to a chair and burned alive, but rather the exchange between Bedelia and Will and the question no one thought actually be uttered.

There is no double entendre or drawn out monologues that veer off course and hint a possible maybe. The simple answer Bedelia gives Will is a solid “Yes”. This is more than a Hannigram shipper’s dream, it’s actually a big deal both for the story but also for the characters. Hannibal doesn’t love easily. He manipulates and bends people to his will but he doesn’t love them. The only other person he has truly loved was his sister Mischa. Earlier in season 3 Bedelia points out the parallels between Hannibal’s love for Mischa and his love for Will. While Fuller has really tried to make this relationship not fall into queerbaiting territory, the overall execution of this relationship still has hints of it. However, unlike other popular shows it does the best it can. We also have to take into account that love is not an easy concept for these characters. Will’s continuous internal struggle to get Hannibal out of his mind is confusing enough as it is, admitting to himself that he feels something akin to love for Hannibal would be nigh impossible. So Will asking “Is Hannibal in love with me?” can also be seen as him asking himself, “Am I in love with Hannibal?” The answer to that is not so clear.

The Wrath of the Lamb 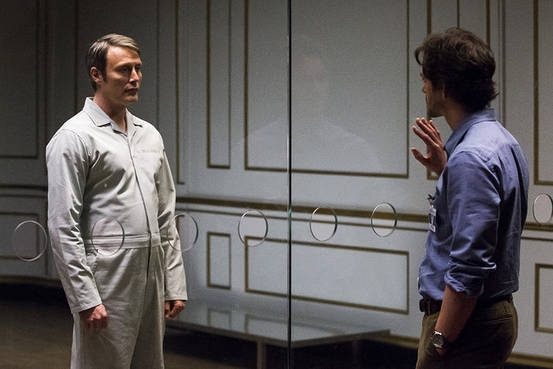 The final episode of Hannibal was incredible. Everything that had been set up all through the season was handled so well. This was supposed to be the end game for both the Red Dragon and Hannibal. Jack and co. had so much hope that things would go according to plan for once, which is really naive of them.

The episode begins with Dolarhyde using Reba to fake his death. His endearing relationship with Reba ended in the previous episode when he kidnapped her. So even though he let Reba live (but scarring her for life), he cannot be seen as the misunderstood monster. He may have truly loved Reba but he the Red Dragon was so much more. He was first and foremost a killer and one of the most interesting serial killers the show has had.

Together, Will and Dolarhyde manage to use Jack and Alana in their plan to break Hannibal out and have their own final showdown, for real this time. In preparation for this incredibly dangerous and foolish plan, Bedelia reminds Will that attempting such a plan would mean their deaths. Hannibal will not be contained. She has reason to fear and so do the other characters. In prison, Hannibal reminds Alana that she died in his kitchen (end of season 2) and every moment since then is borrowed time. Hannibal’s threats are rarely overt and it makes them all the more terrifying. As a result, we get a glimpse of Alana and Margot and their son taking off to safety.

Taking temporary refuge in one of Hannibal’s beautiful estates on a cliff, Hannibal and Will wait until Dolarhyde finds them. By this stage it’s not unreasonable to guess what will come, yet seeing it happen was nerve wracking. The fight scene between Hannibal, Will and Dolarhyde set to “Love Crime” by Siouxsie Sioux and Brian Reitzell (her first single in eight years) was near perfection. It combined the masterful cinematography and the hint of pretentiousness that makes Hannibal so great.

After the Dragon is slain at the hands of both Will and Hannibal, the two embrace and share a moment we have all wanted but never expected to receive. Already some fans are complaining about the lack of kiss between Will and Hannibal, yet it wasn’t necessary. Their intimacy is clear. It’s twisted and wrong (you know, because murder) but it’s clear.

Then, of course, Bryan Fuller had to make EVERYONE uncomfortable with one the final after credits scene that hinted at so much more than we should have been able to handle.

If you look closely you’ll notice there are two spare chairs at that table as if this is a dinner for three. Now, isn’t that interesting?

Hannibal has been one hell of a ride since season 1. While there’s still a chance it could continue some time in the future, what we got for three seasons has been amazing TV. It has made us cringe, it has made us angry, it has scared and surprised us, it has made us incredibly uncomfortable with its food porn, but mostly it has entertained us. It is difficult to end a show, as many series finales have proved time and time again, but Hannibal gave us a very strong outro. While it’s likely we won’t be seeing this cannibal any time soon, we’ll always have Baltimore.