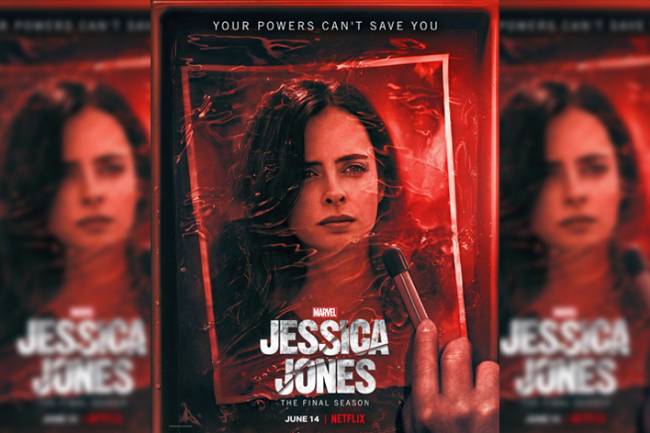 The final season of the final show in the Marvel TV Universe is here. After what has been a heartbreaking few months after the cancellation of the Netflix / Marvel TV universe the time has come to say goodbye with the release of the third season of Jessica Jones. After the terrifying Kilgrave in Season 1 and the heartbreaking Alisa in season 2, season 3 turns it into a moral dilemma with Gregory Sallinger (Jeremy Bobb) turning all serial killer, taking out people and super’s who don’t fulfill their potential. Sallinger has no powers and while how he is able to consistently murder poeple, including superhero’s may be a little baffling, things kick up a gear when Trish/Hellcat powers from last season kick into gear, forcing her to make a decision into what side she is on and what she stands for. It is refreshing to see Jessica Jones take a swing back to actual detective work this season delivering less hero action antics and a couple of whodunnit murder mysterys that create the perfect ending not only this show but for the connected Marvel TV universe.

The season revolves around three main story arcs with Jessica and Sallinger playing a game of cat and mouse, Trish becoming Hellcat and discovering who she is as a hero or villain and revealing more about her troubled past and upbringing and a portion of the show rotating around Jeri (Carrie-Anne Moss) who’s increasing difficulties with ALS are taking a toll. She has recruited Malcom (Eka Darville) as a junior associate as he is trying to seek redemption from his past and turn himself into a successful businessman. The absolutely joy of this series is their ability to juggle all of these arcs without overstuffing it or rushing them. Each arc that eventually intervweaves with each other does so spectacularly and never outstays its welcome.

Jessica and Trish’s relationship is extremely rocky with the aftermath of Trish shooting Jessica’s mum at the end of last season. Jessica has found solace with a new superhero hunk Erik (Benjamin Walker) who is semi-psychic and similarly as screwed up as Jessica was when we met her in season 1. By allowing the first couple of episodes to breathe with no Trish drama, the investigation into Sallinger and her comradery with Erik draws the show back to its detective roots. Before it feels too much like an episode of NCIS : Special Superhero Unit, Trish explores how she is dealing with becoming Hellcat an balancing her high profile celebrity life (albeit selling clothes on a shopping network)

Things take a turn with Jeri takes on Sallinger as a client and seemingly turns against powered heroes publically denying her allegiance to Jessica Jones and Danny Rand. The increased recklessness of Hellcat throws Malcolm’s allegiances into question and the season and show finish with somewhat surprising consequences closing out what feels like a three story arc that could easily be revived with a time jump in the future (looking at you Hulu or Disney +!)

Part of what makes this show work is the incredible cast. Kristen Ritter owns this character, her perfect blend of snark and heart is always on display without ever leaning too much in either direction. Ritter has truly made the character her own and while it was difficult for the character to thrive with The Defenders, Jessica Jones delivered the perfect superhero show for adults in the Marvel universe. Rachael Taylor has also done an incredible job developing characters for Trish, Patsy and Hellcat, all of whom have very different temperaments. Taylor brings an intense fierceness to Trish that allows for her to unleash when she switches into Hellcat. Playing a celebrity with the facade of Patsy is the ultimate showcase for Taylor to play a complex and endearing character who must struggle through a delicate balancing act. Moss has nailed her character since her introduction of season 1 of Jones. Constantly never showing her cards or acting inferior to the superheroes that surround her. This season allows us to get a further glimpse into her life and her mortality as her ALS intensifies and you can see the physical toll it is taking. It is not a big leap for Jeri to be angry at superheroes with healing powers and immortality as she believes the work she does is on the same level.

As always there is a couple of episodes of breathing room this season, with the middle 2 episodes feeling like extreme filler and offering a subplot that felt easily dismissed. Had they chosen to shave it down to 10 episodes it would not have been a bad thing for the sake of the story. Don’t get me wrong, they aren’t bad episodes, they just don’t offer anything of significance to the wide story arc and feel inserted to slow things down and let the audience breathe for a minute. Much like the other Marvel TV series, it would be a much tighter and succinct story without these elements.

Jessica Jones delivers a thrilling and satisfying conclusion not only to the show itself but also to the wider TV Marvel universe. By rounding out the story arcs for all the characters and showing just how far Jessica has developed since the show first started. By confronting the demons of her past and accepting the pain she carries around as a result of this, we have seen Jones become slightly more positive, if not more accepting of herself and who and what she is. That alone has made the journey worth while.

Review – Tales of the City