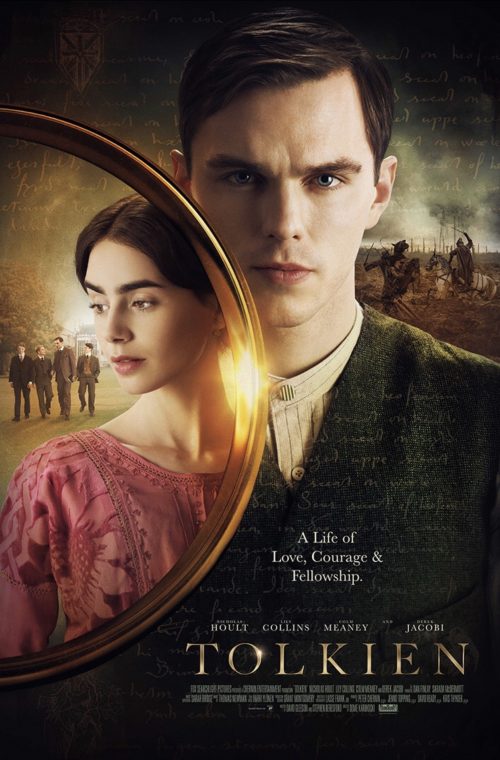 J.R.R. Tolkien‘s biopic can best be described as a modest period drama. Tolkien’s estate has objected to the making of this film, from the start, in fear of smudging the well known author’s name and legacy. If only the film would be somewhat entertaining, but no, Dome Karukoski‘s film is anything but that.

This pacified look at the storyteller’s academic life stays very close to the facts, where we get a look into our titular character’s fascination with ancient and fictional languages. Stephen Beresford and David Gleeson‘s screenplay could’ve focused a bit more on Tolkien’s forbidden romance with Edith Mary Bratt (a waste of Lily Collins‘ talent), because this storyline felt rather thin.

If Tolkien was a bit more romance and a lot less talking, maybe it wouldn’t be this boring. The Lord of the Rings books (later films) are well known and anything but soulless. Watching a portrayal of the man’s early life and how he came to the idea of writing his biggest work “The Hobbit“, sounds more exciting that it actually looks like. The film is also very safe, an aimless journey with a fellowship who have the uncontrollable urge to talk literature. The only thing I can applaud it for is its attempt at showing us the etymology of Tolkien’s work.

Nicholas Hoult first shows up on screen as a soldier wandering in the trenches as if it was Middle-Earth, and recalls his past through flashbacks while imaginary dragons and Orcs pass him by. We then witness his entire challenging childhood: from Tolkien (played as a younger version by Harry Gilby) and his little brother getting placed under care of Father Francis Morgan (Colm Meaney) after their mother dies, to seeing him earn a spot the fancy King Edward’s School, where he gets bullied by a group of boys who eventually become his closest friends.

We get to see boys sipping tea while creating daydreams, but these somewhat compelling characters (all due to the promising acting skills of Patrick Gibson, Anthony Boyle and Tom Glynn-Carney) seem wasted in the end when all three of them grow up and thus recast by an older cast. The script also tries so hard to make Collins’ and Hoult’s characters connect romantically, but watching the clumsy conversations take place, is just too painful to look at.

The road of these group of friends leads eventually to creating their own fellowship and constant reminder of Helheimr‘s spirit, which becomes some sort of code to seize the day and don’t back out because it looks hard or ethically incorrect. Several situations turn out more challenging, but just like shouting the word “Shazam!” can turn anyone into a superhero, Helheimr can turn every chicken into a daredevil. Backed up by Thomas Newman‘s score, the Lord of the Rings trilogy is never far away and sometimes feels too closely inspired by Howard Shore‘s score. Careful there Newman, many others have dipped their toes in other people’s waters with consequences..

To me, Hoult feels miscast and that’s a pity. The leading cast can’t seem to catch a break with failing box office results and critical abominations (X-Men: Dark Phoenix having been released in Australia just a week prior to this, is not helping Hoult’s career..), so I really wish for them to try something completely different. Hoult and Collins are brilliant actors who know how to deliver their lines, but don’t look challenged and mostly bored.

Tolkien tries so hard to convince us how talented the writer himself was, but the Lord of the Rings trilogy already showed us that. And that’s something no one will ever underestimate. Undoubtedly a film that didn’t have a purpose or destination.

Tolkien is out in Australian cinemas tomorrow.