Looking Up / Why Do We Cover The Mirrors?

Transparent has quite a beautiful opening theme. It fits so well with the show. The old family tapes documenting life. It’s almost like a preface for the show itself, as if this was the Pfeffermans’ life over the years. It’s great to see how sexuality and gender plays a part in this, and every, family. With these two final episodes of season 1, it seemed appropriate to bring attention to the title credits because life has happened and will continue to happen. Hopefully we’ll see more Pfeffermans in the future.

Previously we’ve seen the Pfefferman kids show an incredible amount of self-centeredness and lack of empathy. From the first episode we know they are so self-involved to the point where Maura says, “I don’t know how it is I raised three people who cannot see beyond themselves.” Time and time again Ali, Sarah and Josh have shown they can care and they can see just how flawed they are, yet they always return to it. There is a strong sense of self-preservation going on here. If they did let their guard down, as all of them have at one point or another, it hits them hard. Still, it’s hard to excuse or justify their actions because they should know better. Shelley has been consistent in her need to live as best she can despite the struggle of taking care of Ed and his dementia. Maura, as the focus of this series, has had an emotional and fascinating journey. We’ve seen her past as she’s tried to find a compromise in order to uphold her duties as a “family man” but we know the burden this has placed on her. So to see her finally come into her true self has been gratifying. Not always happy, but still progressive. Episodes 9 and 10 bring us some closure but also lots more to deal with. Lots. We’ve known about Ed’s declining health for some time and this is finally taking its toll on the family. Shelley is at the end of her patient and brings up the idea of euthanasia. In true Transparent fashion, this heavy topic is discussed almost as a throwaway gag with Shelley admitting, “Sometimes I do some googling”. This is how the family copes. Avoiding the big issues directly but rather skirting around it from a safe and controllable distance. Of course this sets off Ali’s holier-than-thou attitude as she refuses to take part in it. Earlier on it seemed as though her protectiveness of Ed stemmed from something deeper, but with everything that’s happened it’s clearer that she’s just taking the moral high ground without actively doing anything to help. In fact, no one except Maura seems to help Shelley. This leads to a wonderful scene where Shelley finally snaps and tells her no-good kids how little they care.

What’s great about this episode is seeing how close Maura and Shelly are. After all the years they were married and then separated, they are still each other’s soul mates. Both find comfort in the other. From the flashback episode we know their marriage didn’t end on good terms yet, years later, here they are still loving and respecting each other.

At the end, however, we sadly lose Ed in a wonderfully shot sequence that is both child-like and heartbreaking. Ed wakes up, disregards the family meeting where they all agree to euthanise him, and walks out into the night one last time. As he goes we are treated to a flashback of one of the first interactions the kids had with him: a terrible, disrespectful joke about dementia and an STD. With everything that’s happened, it’s almost endearing.

The final episode continues with Ed’s funeral. It’s not particularly sombre as each family member has either had time to grieve or, more to the point, have other things on their minds. Josh is preocupied with his potential relationship with Rabbi Raquel, Sarah is having second thoughts about leaving Len, and Ali is angry that her best friend has slept with Josh and, more importantly, has been in love with her since high school and has endured years of pain because of it. All of these are important issues but they do not take a back seat even at the funeral. 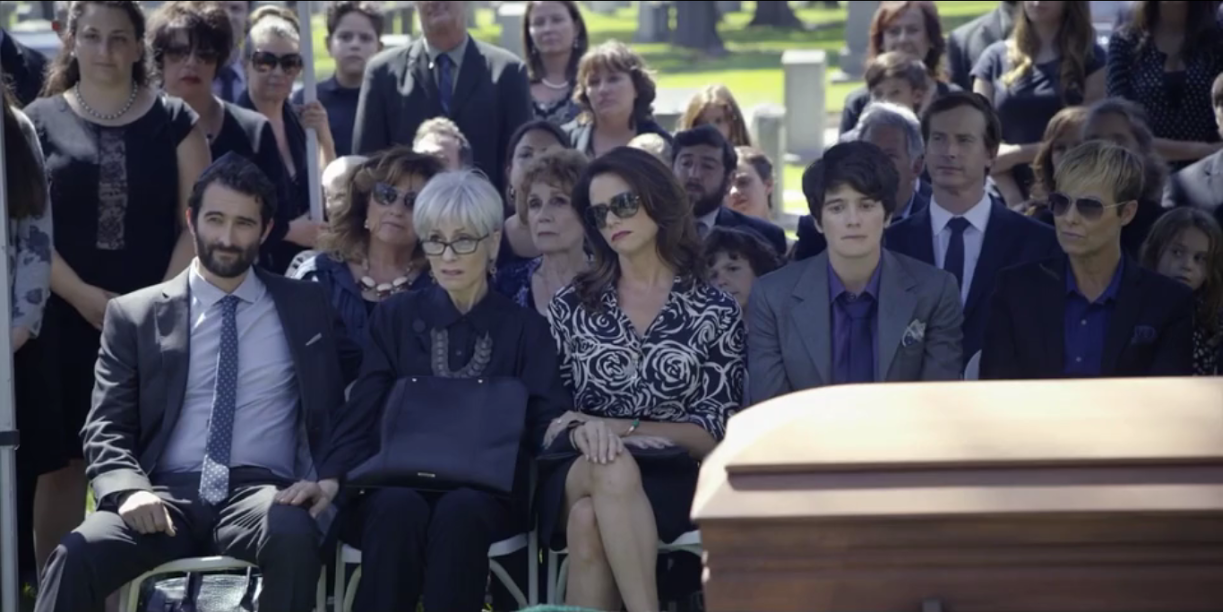 But this episode is not about to just let things lie. Back home at the wake, the pent up anger and issues come out. Sarah gives in to desire and is about to cheat on Tammy with Len but he is more honourable and tells her he can’t do it, he can’t make her cheat. It really highlights Sarah’s previous carelessness. Ali, in her emotional state, tells Rabbi Raquel there’s a possibility Josh is a “love addict”, someone who needs others to fall for him. This of course causes Raquel to lose hope of believing Josh’s intentions. Later, Ali has a loud confrontation with her parents about letting her not go through with her bat mitzvah, which leads to a depressing moment when we realise Maura knows Ali is using her for her money. Maura knows Ali doesn’t even like her. Meanwhile, Josh has to deal with a visit from Rita, his old babysitter/first sexual conquest.

Rita is accompanied by a much, much younger man and while at first we think it’s a way to make Josh jealous, she reveals he’s actually Josh’s son, named Colton. This is a huge twist that we didn’t see coming yet it’s debatable whether it’s a good twist. It certainly brings up many more issues that need to be dealt with, and it will be great to see how Josh reacts to this after being so heartbroken about his ex-girlfriend’s abortion. However, it felt a little melodramatic and gimmicky. Whether it turns out to be a good plot point is yet to be seen.

The final scene is, like the show, understated but full of emotion. Throughout the series we haven’t actually seen much of the whole Pfefferman family together, even in the flashbacks. With Ali’s return, the family now complete with Colton (though no one really knowing who he is yet) sit down for dinner. Since Colton is a Christian, he says grace to an uncomfortable Pfefferman family. With all of them connected, Ali holding a strand of Sarah’s hair, the realisation dawns upon them and they all understand who Colton really is.

Transparent has been an amazing show, exploring more than just the subject of transgendered people, but also of family and identity. It has been funny and thoughtful and heartbreaking. Most importantly, however, it has focused on an issue and a community that has been ignored for far too long. Recently there’s been more and more depictions and stories about transgendered people, most recently with Laverne Cox and Caitlyn Jenner, and shows like this can help to shed light on the lives and struggles of these people. There’s a lack of knowledge that we need to rectify. Transparent has taken up the dialogue and hopefully will allow more and more people to join in and help society move forward. A second season would be fantastic, yet it’s still strong enough to stand on its own even if that doesn’t eventuate.