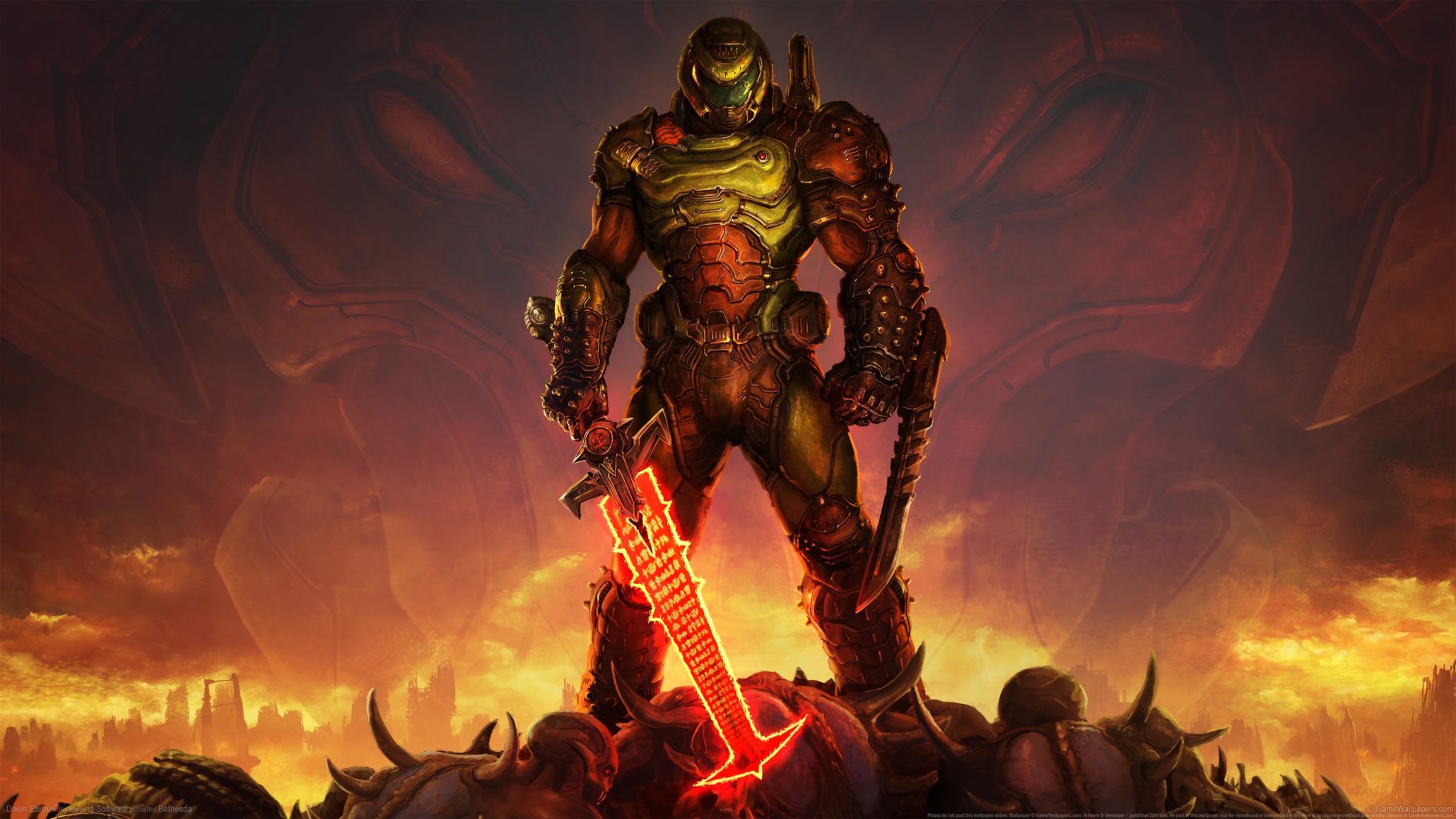 The 2016 release of Doom that served as a re-boot was a complete surprise. The extremely popular series from ID software was a staple growing up at school when the teachers weren’t looking, and after a hiatus the game came back with HD graphics and was a huge success. Now 4 years later the sequel has made several improvements in graphics and this time around there is more of a story and a callback to the original games that turns this game up to the next level. Everything from the exploding graphics, splattering blood and gruesome kills, Doom Eternal is giant campy fun that fans of the old series will adore.

You play as a soldier brought back as the only survivor who can fight the monsters who have brought hell upon Earth. Travelling through each different areas, you pick up different weapons and loot as you battle through varying enemies and obstacles.

Weapons wise this game has a lot to offer. You start off with a basic gun and then pickup new weapons along the way. In the same vein you can upgrade your weapons with mods from mod bots. MY personal favourite was the chainsaw, while fuel is scarce and hardly in the right place when you need it, the completely satisfying feeling of chopping up a demon is my favourite way to carve enemies up.

Ammo for guns and other weapons is surprisingly short. There were many time I found myself out of ammo and surrounded by demons. The game encourages you to use your ammo sparingly and to mix up your attacks with punches, chainsaws and different gun types. Every enemy gives you the chance at a glory kill. You attack the monster initially and it starts to flash red and blue, if you punch it, you get a glory kill. This builds up your punch meter to deliver a massive punch when full.

You can also upgrade your suit and arsenal after completing certain missions at your home base or utilise runes to upgrade abilities that assist with fighting monsters. Knowing which weapon to use on which enemy is a skill I enjoyed mastering. It does take a few hours and some playing around to get it right. Some enemies also have weak points that you can target and shoot first to get rid of their armour and make killing them easier. Throwing a grenade into the open mouth of a wailing circle demon as it self-implodes is bloody hilarious to watch.

Movement is the biggest advancement the developers have brought into this sequel. There is a sense of freedom here that the other games dont possess. Apart from general movement and camera control, you can now run and jump onto cliffs and walls. Using this ability you can scale tall structures and walk and jump to the next platform. The controls and the way the character moves is probably most comparable to the Uncharted games on Playstation when you make the same moves. Crawling, scrambling and climbing is only available in certain areas of each structure and you need to time your jumps and distance correctly to make it. If you are not a fan of this mechanic you may find the game a little frustrating as it is required to access levels for completion. Personally I had a really great time with it, learning just how far to make my character jump and playing around with the environment helped me to feel more connected to the world.

Graphically this game is leaps and bounds ahead of the previous title. There are so many moments where the game reminds me of the old Doom titles with a bit of old school Duke Nukem 3D thrown in for good measure. The way that enemies move and creep towards you (or bolt in some cases!) has the old school charm with a beautiful HD look. Having the game set on Earth that is covered in Hell and demonic goo provides a new environment to explore that reminded me of the Devil May Cry games.

While the focus here is on Single Player campaign, there is so much to do and explore alongside the story. Each level is filled with collectables and secrets to find. The levels feel linear but by opening your holo-map you can find the collectables and figure out a way to get to them. Each level has Slayer Gates, optional challenges that give an extremely difficult hoarde to get through with special loot as the reward for your troubles. These are varied and the weapon bonuses offered up is definitely worth the trouble. There is an online mode but at time of review this wasn’t available to play (check back later for the updated review!)

The soundtrack is incredible, it is metal (obviously!) and with a fast paced sense of urgency matches the action in the game. The squelching and splattering of the litres of blood spilled in the game sound incredible when matched against the thumping music. Australian composer Mick Gordon returns to the series to give a fresh new pulsating backdrop to the visuals creating something completely original.

Performance wise, the game is a dream. I reviewed this on Xbox One X and experiences no bugs or lag during my playthrough. The furious rate of gameplay and graphics that the game dishes out is surprising that it runs so well and is a testament to the game developers that it worked so well.

Doom Eternal is a huge upgrade from the previous game. The world feels fully realised and the execution from ID Software deserves to be celebrated. Fans of the old school series will relish in the constant nods and winks to the old school titles. The graphics and gore is on overdrive here and while the game comes across as realistic, there is an element of campy fun that is infectious. Offering up a mix of classic Doom weapons and new ones help to keep gun action fresh and fun. There is nothing more satisfying than slicing up an enemy with a chainsaw. The game runs like a dream on the Xbox One X and paired with the Elite series 2 controller, this led to hours of slice and dice fun.

New platforming elements bring in welcome gameplay mechanics that turns the game into more of a thinker than previous titles. There are many hours of bonus content with collectables and upgrades to keep you coming back. The difficulty options will encourage multiple playthroughs and I can’t wait to dive into the online multiplayer mode.

Doom Eternal is a sequel worth waiting for.