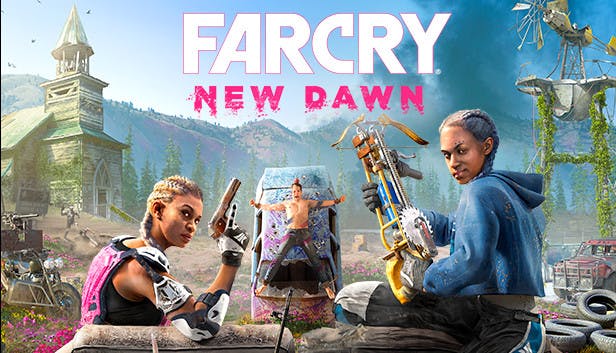 It’s a new dawn, it’s a new day. It’s another Far Cry game…the big question on my lips was do we really REALLY need another one? Fortunately the answer is YES! When a game is this good, more can never be enough. What could easily be shunned as a re-skinned Far Cry 5, has evolved into one of the most addictive Far Cry experiences since Primal (you can read my review of that game here)

The apocalypse has happened and seventeen years later vegetation and animal life has taken over, but yet again a tyrannical ruler…well twins in this case is trying to control the world and its resources. The game serves as a continuation of Far Cry 5 and while does have the same map, the experiences and exploration are much more readily available in this iteration providing a Far Cry experience worth sinking your teeth into.

Part of what made this game so engaging was the ability to craft and upgrade weapons, bases and items. By far the best weapon is the saw launcher that cuts right through enemies and also rebounds off surfaces for multiple kills. It is the most bloody and satisfying way to get through areas infested with enemies. The usual suspects of guns and bow and arrows do fill out the roster, it isn’t anything that you haven’t seen before but unlocking the level 2 and 3 items is great motivation to keep playing.

The story line of your character being the “chosen one” who can eat fruit from Joseph’s tree, survive and kill a bear with a few punches does seem a bit out there for this title, when the Highway men announce their arrival with fireworks and an endless onslaught of attacks it does bring it back down to ridiculous enjoyment. This game seems to take itself a lot less seriously than the previous titles and does so in an incredibly entertaining way.

Exploration is encouraged in the game and the main story missions never interfere if you don’t want to play them immediately. The game starts off in the bottom corner of the map and gradually reveals itself depending on which missions you play and who you recruit to your base. If you want to go and spend all day and night fishing and hunting animals you can, there is no forced play through that makes the game feel almost sand box like in some elements. Speaking of animals they are actually pretty entertaining in this game. You can be ambushed by the Highwaymen, struggling to stay alive and in runs a bear who will happily start taking them out and chase them away. You then have the option to pursue them and snag some sweet bear hide or continue on your way and recoup. This happened multiple times during my play through and sometimes the bear went for me resulting in a few re-spawns.

Vehicle wise the game has the three levels like weapons and ultimately was a little disappointing with the choices offered up. There is also a Ubisoft club only buggy vehicle which looks cool, but if you are new to Ubisoft titles you can’t unlock immediately and need to play the game for a while before you can redeem. Driving around in cars can make it difficult to take enemies out with gunfire and don’t get me started on “DON’T KILL INNOCENT CIVILIANS” warning that constantly pop up when some idiot runs out in the middle of the road or walks into your gun fight and stands in front of enemies. It seems that art imitates life in this respect.

The lighting and shadows in the art of this game really help set the mood. There is one mission in which you travel down a river and light torches along the way. There is something so chilling and creepy, yet beautiful and enchanting about this moment that solidified my love of this game. It is a quiet moment, a slow and eerie experience that took me by surprise and made me appreciate the rest of the design and beauty that this game offers. The pink and purple infusion of colour and light that permeates the environment is something rarely used in a post apocalyptic title and is used to great effect. The twinkling of a pinkish light streaming through the antlers of a massive deer is majestic. It looks even better on a PS4 Pro.

Overall Far Cry New Dawn took me by complete surprise and gave me an addictive and beautiful game environment to play around in. The array of weapons, items and upgrades are fairly on par with other games yet the addition of the buzz saw launcher is pure genius. While the story may head to some really REALLY out there places, it never takes itself too seriously and its dedication to providing a sandbox like experience ultimately pays off. Far Cry New Dawn is the surprise of 2019 and worth playing.

The Stillness Of The Wind (And The State Of Things)