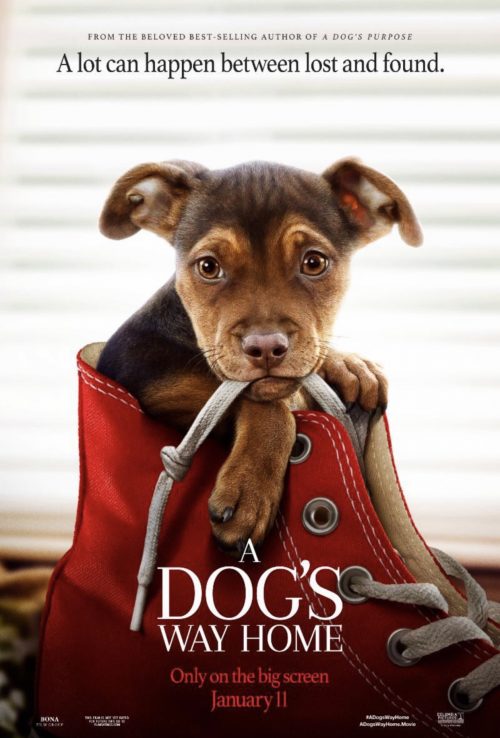 A Dog’s Way Home is definitely not for everyone, but unlike that other dog centred story from a few years ago, A Dog’s Purpose (and getting a sequel later this year – A Dog’s Journey), this book adaptation is not just made for children. Author W. Bruce Cameron has been known for his “dog tales” and clearly there’s a market for it. Dog lovers will get all fuzzy and warm watching this pooch embark on a 400-mile journey to get back home to her beloved owner. Its very cliché and predictable most of its runtime, but they’ve picked out the most perfect canine to make even the most deep-frozen hearts melt.

Shelby (who plays Bella), a real rescue dog btw, is the star in this family drama. It has a few similarities to the 1993 Disney film Homeward Bound, which I used to love as a kid, and has not just one but TWO dogs and a cat finding their way back home. Oh yeah, just to be clear, A Dog’s Way Home isn’t just about a dog, cats are a very important part of the story too. Maybe there’s another market for Hollywood to explore and use real cats instead of the CGI-heavy creatures in this film.

Bella’s pitbull mother gets taken away by a dog catcher who’s being influenced by a villainous real estate developer who wants to tear down some rundown houses which are home to numerous stray dogs and cats. Bella, finds a loving new family with Lucas (Jonah Hauer-King), who works at a VA hospital, and his depressed war veteran mother Terri (Ashley Judd). We also get to meet co-worker and love interest Olivia (played by Alexandra Shipp).

Bella (voiced by Bryce Dallas Howard) doesn’t look like a pitbull, since her father probably wasn’t, but coming from a pitbull mother means she’s a dangerous breed which is illegal in Denver, Colorado – where the movie takes place. “That’s basically racism for dogs”, protests an emotional Olivia. So after briefly being locked up at the local pound, Bella has to stay with Olivia’s family who live hundreds of miles away until they meet legal arrangements to make sure they can keep the dog.

Not understanding the situation and missing Lucas, Bella is eager to play their little game “Go Home” to get reunited with him. This is when she starts out on her dangerous journey through mountains and several seasons.

Bella meets some interesting human- and animal characters along the way, including a gay couple who briefly adopt her after she helps save an avalanche victim, a homeless veteran who uses her charms to get more money while begging and an orphan mountain kitten that she takes under her paw.

A Dog’s Way Home features some intense scenes that could upset younger viewers. She has some life altering experiences involving interacting with a pack of wolves, a dangerous highway and the fight for survival.

Director Charles Martin Smith, who directed A Dolphin’s Tale and its sequel, likes his slapstick clichés such as a “chicken run” through a supermarket when employees bump into anything and everyone possible. But the film’s dog loving demographic won’t really care too much about the formulaic story writing and are just here to see a dog find his way back home and eventually tear up multiple times throughout the movie.

A Dog’s Way Home will play in Australian cinemas from 28th February 2019.