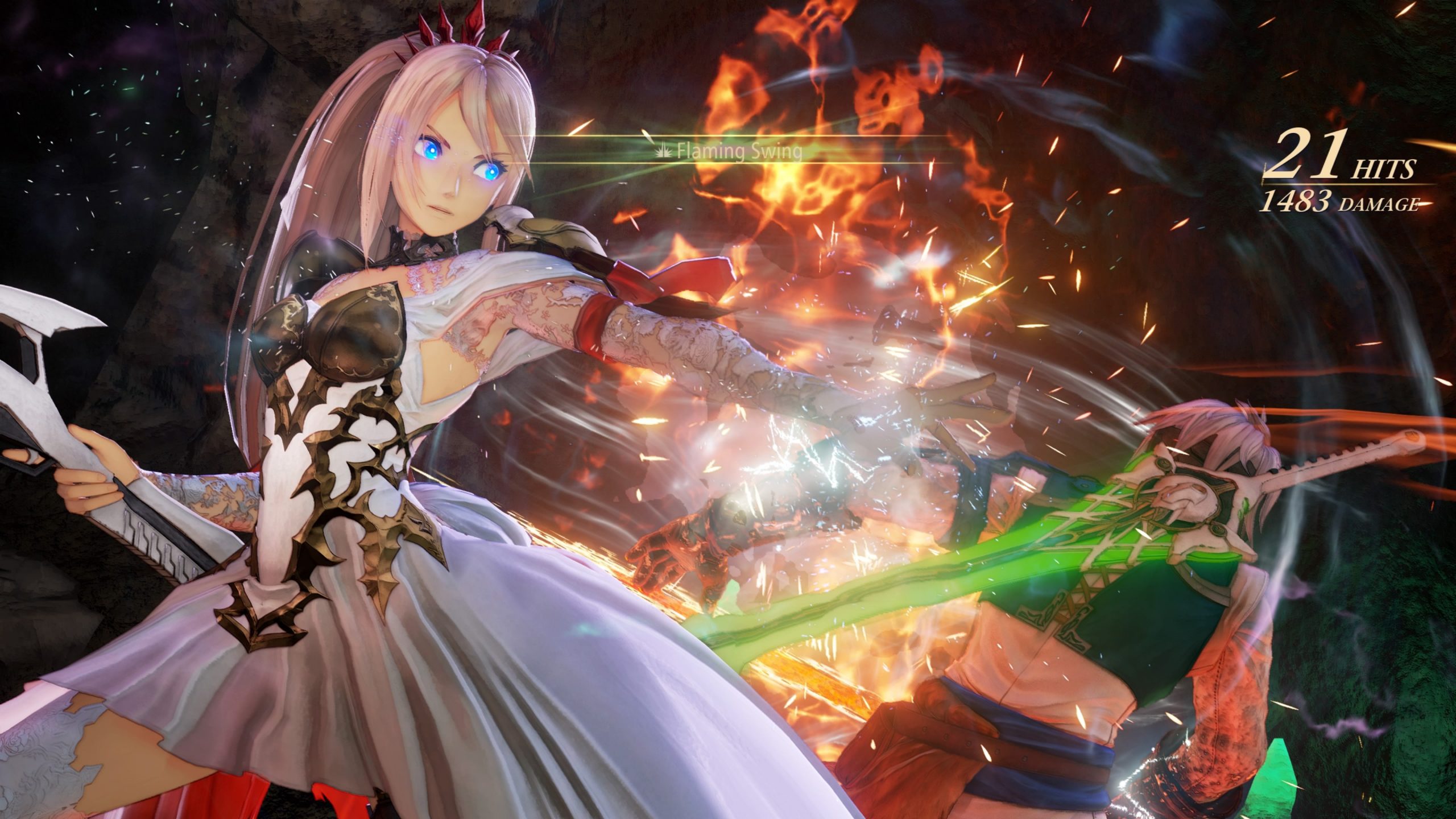 Tales of Arise is the 17th game in the Tales series. This is a Japanese RPG series that first launched in 1995 and has graced PCs, consoles and handhelds ever since. Just like Final Fantasy almost every Tales game is a standalone experience and Tales of Arise follows this model with a brand new world and story for you to explore, and a broad range of characters for you to share this adventure with. This is my seventh Tales game and it has become my new favourite Tales game, telling an interesting story about six awesome characters who I have grown to love, with incredible art, incredible animation, fast-paced combat, and just so many things to do.

Whether you are a Tales veteran or new to the series, you should know that this is a hefty game with a lot of story to get through and a stack of sidequests to flesh it all out. I rolled the credits at 44 hours having completed the main story and 45 of the 70 sidequests, and I think it would take another 20 to 30 hours to see everything this game has to offer.

The story starts the way many modern stories are starting these days – you drop in on the main character who has amnesia. He doesn’t know where he comes from, he doesn’t know his name, and he doesn’t even know what his face looks like underneath the iron mask that he cannot take off, but he knows he is very good with a sword. You quickly learn his name is Alphen and he is a Dahnan, a race of humans indigenous to the planet Dahna who have been enslaved by the Renan’s, another race of humans indigenous to the planet Rena. Alphen joins the uprising and together with a bunch of Dahnan and Renan companions, he journeys across Dahna to deliver the Dahnan’s freedom. Every single area is full of NPCs and is rich with its own history and wonderful story moments that I got really invested in.

This is a relatively straightforward story to start with, but if you have ever played a JRPG before you know that things get strange, and it’s about halfway through where this game starts to get really weird. The story morphs considerably, revelations come thick and fast, and the main characters go from leading an uprising to saving the planet by stopping the planet’s magic from being devoured. At this point, the plot starts to move very quickly and there is a lot of weirdness to get your head around, but it all comes together for a satisfying ending.

By the end of the third area (about 15 hours), Alphen will have been joined by five main characters (Alphen, Shionne, Rinwell, Law, Dohalim and Kisara) who remain companions for the rest of the game. Without these characters, the story is actually bland, but with these characters, the story becomes a mechanism for the development of deep and meaningful relationships between all characters and that is the real star of the show. Each character has a complex backstory that is slowly unveiled throughout the game. Each character has a number of flaws that have shaped their personality prior to joining the group. And each character embarks on a journey of personal growth to face their inner demons while battling real demons, to become better people. I am invested in each one of these characters, I couldn’t possibly pick a favourite ***cough*** Dohalim ***cough***, and I really hope Bandai Namco makes a sequel with these characters because I want to spend more time with them.

Tales of Arise is an RPG that is focused on fighting monsters and completing quests to earn experience points that you can spend on improving your character. If you have played any JRPG before then it should feel familiar with only a handful of notable differences from the standard JRPG gameplay. There are two types of experience points, one to level up your character’s base statistics (health points, attack, defence, etc), and one to unlock combat skills known as “artes” in the Tales games. As with most JRPGs, you can farm experience points to ensure your characters are over levelled compared to the enemies, but the combat in this game rewards technical prowess and you beat many enemies whilst being under-levelled. My characters were Level 53 when I took down the Level 61 final boss.

World exploration is done through 3D platforming, allowing you to run, jump, climb and swim in order to search every nook and cranny for collectables and battle enemies that appear throughout the world. Progression through the world is almost entirely linear, there are regular campgrounds to recharge your health and cook up different meals to apply different bonuses for a period of time, and there is plenty to do such as manage your farm, catch fish, and talk to the multitude of NPCs. There are stacks of fast travel points, and fast travel is only deactivated when you need to walk through the world for story purposes.

Enemies are plentiful in the world, you will only fight them when you touch them, otherwise, you can easily manoeuver around most of them. When you do touch an enemy you will be taken into a combat arena where you take direct control of a single character while AI controls up to three other characters in the arena. The combat is very fast-paced. You will need to move your character around, use your weapons and artes, and dodge enemy attacks in order to stay in the fight but to win you will need to call on your AI-controlled buddies to execute special moves at specific times so you can build big damage combos. Enemies in this game have a lot of health and it can feel like you are barely making a dent, so unless you figure out how to build combos your fights will take a very long time. When you start to build up a combo of hits on an enemy you will start to fill a blue stagger bar, and once the stagger bar is full you can execute an instant kill special move that will kill the enemy no matter how much health it has, and damage all the other enemies around it. It is so much fun building these combos, and it is immensely satisfying to instant kill an enemy that is 10 levels higher than your characters while it still has three-quarters of its health left. Learn how to build combos and you will be rewarded.

One of my favourite parts of this game is the skill tree which I think is the most interesting implementation of a skill tree I’ve seen in a long time. Each character has 15 blocks of five skills to unlock with different skills unlocked by spending combat points. The interesting part is that you need to unlock each block of five skills by performing specific in-game actions, such as having Alphen cook a curry, having Law perform 600 leg kicks, or having Dohalim finish a set of related sidequests. It is also not always clear what the requirements are to unlock each block of skills, so it rewards exploration and experimentation. I hope to see more games in the future be as creative with their skill trees.

This game is gorgeous. So much of my time in this game was spent taking screenshots (I took over 400!) and staring in awe at how well crafted the world is, every house, every tree, every character, every enemy. The animations are exceptional. The cutscenes are expertly crafted with a focus on stylish keyframes that look like they’ve come straight from a double-page spread in a comic book. There is so much visual variety and I loved every moment of it.

Speaking of the cutscenes there are three styles used here – the first is the one we are most used to in video games which is in-engine cutscenes using the same assets as are used for gameplay. The second is a comic-book style still image frames which are triggered manually by the player as they are wandering around the world or settling down at a campsite to cook some food. The third, and my favourite, are the anime-style cutscenes that are reserved for all the most important story moments. It is clear that so much time, effort and care have gone into making this game look as good as it possibly can.

The last thing worth mentioning is the ability to customise the look of your characters. As you progress through the game you will unlock stacks and stacks of weapons and armour, but there is a separate menu available that allows you apply outfits, headpieces, weapon skins, and a whole lot of accessories such as jewellery, silly glasses, tails, animal ears, and more. A large variety of these are discovered throughout the game, and more are available for purchase as DLC. Every single cosmetic item is full of intricate detail, showing the same care and attention as the rest of the visuals in the game.

I think it’s pretty clear by now that I had an absolute blast with this game. With games as long as JRPGs tend to be it there can often be boring parts, grindy parts, and a persistent feeling about wondering when is this going to end. I never had that feeling with Tales of Arise. I was as interested in the game at the 1-hour mark as I was at the 10-hour mark, 20-hour mark and 44-hour mark, and I still want to go back to clean up the remaining sidequests, find the last few collectibles, and beat the most challenging optional bosses. Ultimately JRPGs are not for everyone, but if you are at least JRPG-curious then I think Tales of Arise may be your gateway drug to a brave weird world. If like me you are already a JRPG fan then I think there is a good chance you will love it, though I could understand if people wanted the story itself to be a little more ambitious/weird. Regardless, in my opinion, Bandai Namco have knocked it out of the park with Tales of Arise, and the numerous awards this game has received have all been well earned.