Review – Sequin in a Blue Room 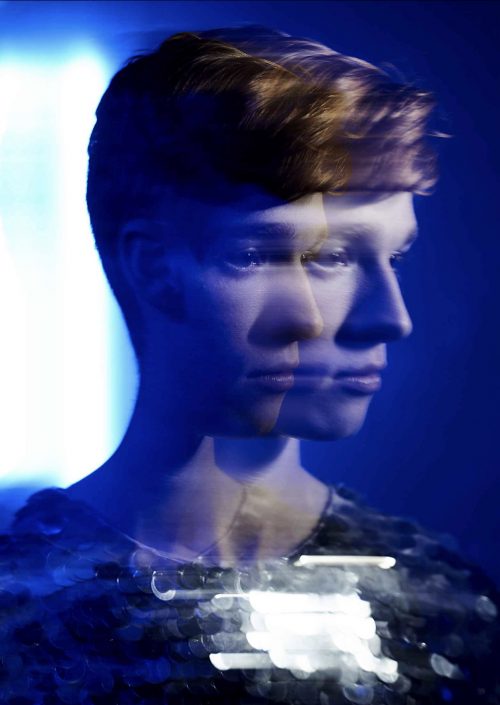 Sequin in a Blue Room tells the story of Sequin (named after the crop top he always wears when having sex), a gay teenager looking for sex with older men. Sequin (Conor Leach) lives in Sydney and mostly spends his time on hookup-apps looking for potential fun, while his family and friends don’t have a clue what happens when they’re not looking. Van Grinsven’s queer film is one for the ages and sketches a very modern tale of what it’s like to grow up in the age of social media.

One of the main characters of the film isn’t one in the flesh, but rather one on screen in the form of text and visuals. Chris Johns‘ motion graphics never become overpowering and guide us through the story that develops under Sequin’s thumbs, scrolling through lists of nameless yet labelled headless torsos. Sex and fear go hand in hand, and that’s just what thrills the young man, blocking whomever he’s met just after each encounter.

The title cards which are very present in the film, count down to the ending of the story. But the one that sticks the most is its opening sentence – ‘a homosexual film by Samuel Van Grinsven‘. Editor Tim Guthrie and the director wanted to pay tribute to Gregg Araki‘s New Queer Cinema, where Van Grinsven got his inspiration from. The cinematography by Jay Grant is mostly spellbinding and pulls you in by his use of colour, neon lights and closeups.

Here is where newcomer Leach comes up in full force. This fresh face plays Sequin with such confidence, you’d say he is this character in real life. Face acting galore, giving the right amount of looks and smirks to tell his story without even making a sound most of the time. This queer coming-of-age story turns dark while Sequin looks for love in a hopeless place when attending a sex-party in the titular location. Being mesmerised by a young man (Samuel Barrie), a married man (Ed Wightman) he met earlier becomes concerned with Sequin’s reckless behaviour and turns into a threat that won’t go away.

Co-written by Jory Anast, we also get to explore the relationship between Sequin and his unsuspecting father (Jeremy Lindsay Taylor). The boy isolates himself indoors, to which his father becomes more and more concerned there’s more going on than just puberty happening under his roof.

After screening at Sydney Film Festival, where it received the audience award for best feature, the film is now headed for OutFest in Los Angeles to then screen at Melbourne International Film Fest in August. I had the opportunity to interview Van Grinsven and have a chat about the film and his plans with it, don’t expect this talented filmmaker to slow down anytime soon. He clearly knows how to blend different genres while making a narrative that isn’t overloaded with dialogue. I can’t wait to see what Samuel has in store for us, but saying I’m excited is an understatement. Sequin in a Blue Room is New Queer Cinema at its finest.