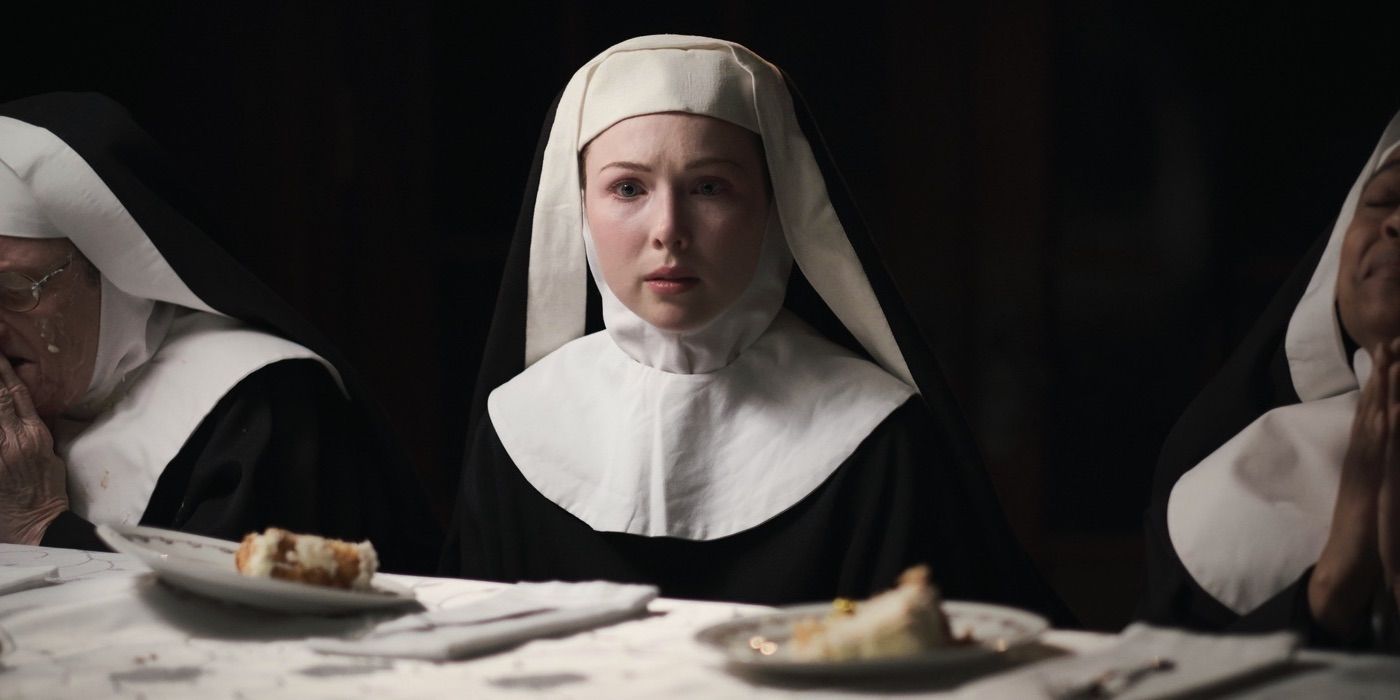 When rumours of a demonic possession in a convent make their way to the church, two priests are sent to investigate and get rid of the demon by any means necessary. This premise sounds like the set up for every ‘priest-comes-to-do-an-exorcism’ movie that has been made before. This is where the latest horror-drama from writer/director Mickey Reese, Agnes, leans heavily into a self-aware nature that flips this premise upside down with slick cinematography, a synth-filled soundtrack and religious characters who seem more secular than God-loving, that makes this movie feel like a fresh take on the ‘exorcism-horror’.

Whether intended or not, I laughed a fair bit during the opening scenes of Agnes. Early on, interactions and dialogue between the nuns about how attractive the young priest is or highlighting the stupidity of the higher-ups in the church came across as slickly written, intentional jabs at the horror-genre, whilst also successfully setting up the characters motivations and personality. However, as the film plays out, the seriousness and true horrific tone kicks in for a truly interesting exorcism tale, while still holding an oddly humorous vibe with it’s incredibly on-the-nose awareness.

The main players of Agnes include the stereotypical characters you would expect in this story (once again, playing the self-aware card). Mother Superior (Mary Buss) is the no-nonsense leader of the young sisters of the convent, of which Sister Agnes (Hayley McFarland) is the rumoured host of this demon and her soft-spoken, kind friend Sister Mary (Molly C. Quinn) who is charged with taking care of the ill Agnes. The remaining sisters, who are less pure of heart and faith, frequently conspire and discuss as to whether this demon has entered Agnes for being impure. Then we have a slightly sketchy, not so by-the-book Father Donoghue (Ben Hall) who is assigned to deal with this possession with the help of church newcomer, Benjamin (Jake Horowitz). And later in the film, an egotistical, televangelist by the name of Father Black is called upon, making even more of a scene for this spiritual showdown! Each character in this film feels like it has been plucked out of other horror films, say The Exorcist or the second season of American Horror Story. Normally, I feel this would negatively affect my interest in a film, usually complaining about a generic, recycled take on these characters. But it really works in Agnes and makes it equally compelling as the other horror films that have preceded it.

The direction of Reese is incredibly crisp and captivating. The lighting and sharp cinematography creates a distressing, claustrophobic mood throughout. With the first half of the film being primarily based within the convent house really adds to the feeling of the walls closing in on these characters. As the film adds more characters into this ever-closing location, each scene feels like there is no chance of escaping the demon lurking within. The use of practical effects for each spooky moment (whether its doors opening and closing on their own or blood spurting from bite-inflicted wounds) keeps the tone of Agnes in a grounded state, letting the absurdity of the story and characters being the catalyst for the insanity.

Reese’s script also does a great job of moving the story along in a way that subtly creates more and more tension as it unravels. The characters occasional obliviousness to the situation in front of them does create a genuine threat, and that threat is only felt on screen by the performances of the main actors. Quinn as Mary is the standout in a subtle role that steals the movie, and McFarland has some great moments as the possessed Agnes. The script also takes a turn in the films third act that is unexpected and becomes a lot more of a deeply personal story about trauma, human connection and the disconnect from faith to achieve that connection. Without going to deeply into it for spoiler’s sake, it’s a welcomed addition, but also a big tonal shift that can feel jarring at first.

However, what stops Agnes from being one of the ‘great’ horror films of this generation is that at times the self-awareness doesn’t always make up for the familiarity of the first two acts. When the self-awareness works, its great. When it doesn’t however, it does fall short and slows the pace down in certain scenes. It’s never detrimental to the point where the movie becomes a chore to watch, however, it is noticeably different from the scenes in Agnes that make this film standout from the rest of the films in its niche genre. The film’s third act does go in a direction that feels different and unexpected based on the movies first hour or so, and aids in picking up the slack that can be found earlier on.

Agnes is undoubtedly intriguing, and while not all its elements work well together, the self-aware horror film aspect is entertaining, and the deeper meaning of the movie is elevated by a great performance from Quinn. It may be unintentionally making fun of the horror films that it’s been obviously inspired by is a great hook for a movie that has more to say than you would initially expect it too.