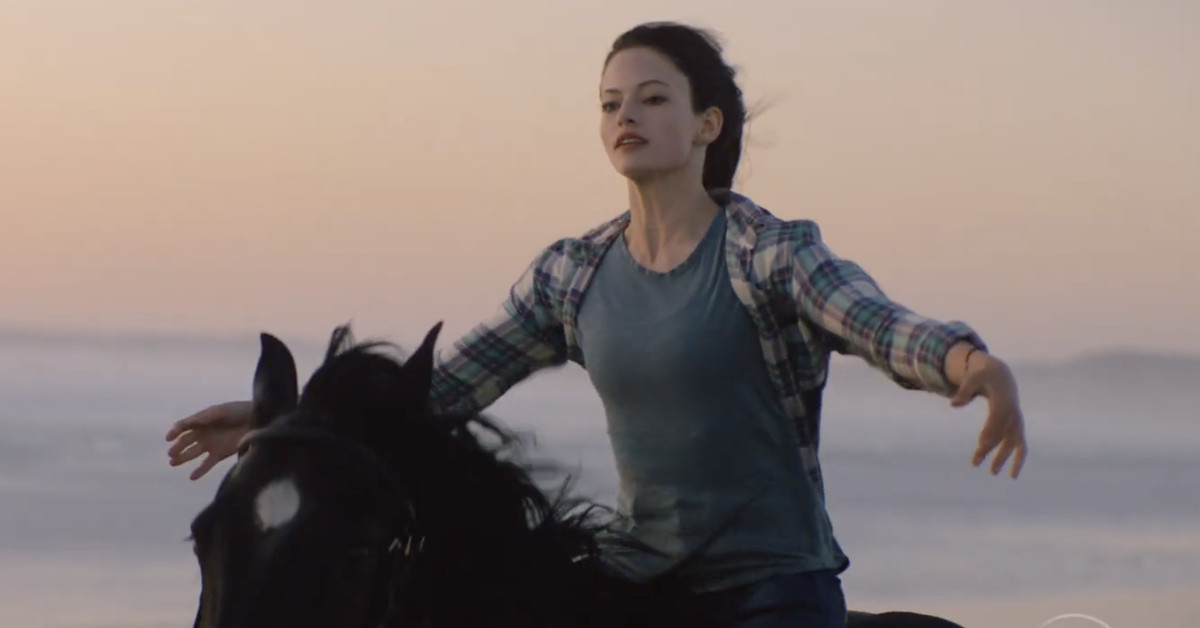 Black Beauty in this reiteration of the story is a female mustang (voiced by Kate Winslet), who narrates her life from birth, to the tragic separation from her mother, to being purchased by a horse trainer named John Manly (Iain Glen). Beauty is incredibly free-spirited and mischievous in nature, a ramification of the lessons her mother taught her when she was a foal. This mischievousness is on display when Beauty is being “broken” (the taming of a wild horse) by John – and causing him a fair bit of grief while doing so.

When John is informed of the horrifying news that his sister and her husband have been killed in a traffic accident, his niece Jo (Mackenzie Foy) reluctantly moves onto his farm and immediately forms a bond with beauty through the pain of both having lost their parents.

Black Beauty feels like a generic, Disney-fied film adaptation… but that isn’t necessarily to the movie’s detriment. For most of the film, the more adult themes and darker elements have been slightly muted to be more accessible for a younger audience. Themes such as where ‘horses’ (and humans) go once they die, accepting grief and dealing with those emotions are the forefront of the stories message, but in the script are usually softened with humorous moments or dialogue that treads carefully around those topics. And while this is probably the right approach to take for this movie’s demographic of families with younger children, for an adult audience it can hinder the emotional investment overall.

The Disney-fication also comes through some of the melodramatic set pieces. An overuse of CGI in certain “action” scenes matched with a low-set of stakes emotionally can deter the engagement into the more down to earth and emotional moments of the movie. The argument could be made that they were included to add a bit more excitement into the story, and if that’s the case then there is no denying that these moments work on that level (especially a daring river rescue in the third act), but the length of these scenes also add to the desire for the movie to return back to it’s strongest element, the relationship between Beauty and Jo.

On the other side of the darker themes, Black Beauty is a heartfelt story about the bond between two beings who have both experienced tragedy in their lives. This is where the movie shines in perfectly showing that this special bond doesn’t have to necessarily be between two humans, but that is shared between a horse and young woman, is a great way of creating an interesting and engaging on-screen dynamic.

Director Ashley Avis has crafted a beautiful looking movie. Crisp cinematography captures a stunning image of rural America including sweeping shots of horses galloping with glorious mountainsides in the background leave the eyes in complete awe. Avis’ also captures the heartfelt moments with care and subtlety, however can lose some of that personal touch when it comes to those bigger, more generic moments.

All in all, Black Beauty is an easy-to-digest family movie that does contain a heartfelt message about the power of bonding through the overcoming of tragedy. However, at times, it can fall into a generic slump that doesn’t always hit the correct emotional beats.