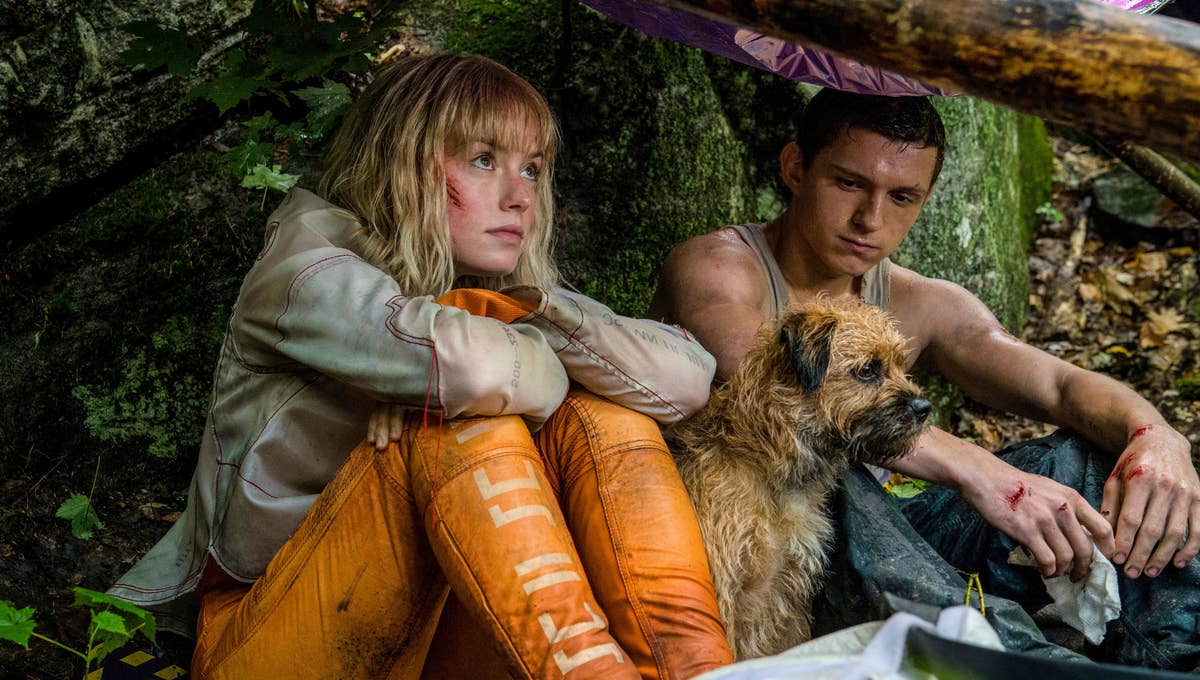 Keeping within half of its namesake, Chaos Walking has gone through a chaotic and tumultuous road to cinema release. With principal filming finishing in 2017 when Tom Holland was at the genesis of his superstar status after his turn as Spider-Man, and with Daisy Ridley being front and centre of the Disney Star Wars saga, this movie was meant to be the next big franchise for them to jump into. However, after disastrous test screenings calling the movie “unwatchable”, the only viable option was to head into reshoots. Unfortunately for the studio backing Chaos Walking, the reshoots had to be delayed until 2019, well, because… Spidey and Star Wars contracts. Once reshoots were completed, a string of moving images and sounds we compiled together to make a movie, and finally in 2021, the film hit theatres.

Set in the 2500s, a planet known as New World is inhabited only by men. However, all living creatures on this planet are affected by ‘the Noise’ – a visual and auditory manifestation of every thought inside their brain. The less control over everyone’s ‘Noise’ shows weakness to the other men in the town.  All women who previously fled to this planet were eradicated by an alien force known as the Spackle, meaning most of the younger men in this town have never seen a woman before, even their own mothers. With the men hiding in their remote town, everything is turned upside down when a space craft from Earth, manned by Viola (Daisy Ridley) crash lands near the town. Todd (Tom Holland), an outlier of sorts, takes it upon himself to protect Viola from the town’s sinister leader, Mayor Prentiss (Mads Mikkelsen).

Chaos Walking introduces an incredibly fascinating concept with the ‘Noise’. Imagining a world where no secrets can be kept creates the desire for strong relationships to be on show, whether positively or negatively emotional. The first act of the movie does show this, albeit on a very shallow surface level. Todd’s relationship with his surrogate father, Ben is honest and open due to the ‘Noise’ and Todd’s inability to control it strong presence. The heart of the beginning of Todd’s adventure should lie within this relationship, but unfortunately it falls too flat to be worth investing in. On the opposite end of the spectrum, all of Todd’s negative relationships are usually just boiled down to name calling through the ‘Noise’ to anyone who belittles him, never exploring a deeper meaning as to why the majority of his town sees Todd as inferior.

However, the ‘Noise’ does provide occasional, and somewhat repetitive, humour once Viola begins to see Todd’s thoughts. Which as you may have guessed being a story targeted at young adults – all have to do with romantic advances. It is lighthearted, harmless humour that would normally be frustrating in a better movie, but almost acts as a reprieve from the countless storylines that are set-up and never completed.

The main culprit of this being the Spackle-alien species, who are spoken of as a great threat to the town (and the reason that no women are left alive on New World). Described as vicious, haunting creatures, unfortunately the Speckle only appear twice in the film, and incredibly briefly. The first time being of the predictable teenage level of scary ‘jump-scare’ attack in the woods, leading to a brief altercation with Todd. Although the beats of this action scene are all too familiar, it did feel like it had to potential to keep ramping up to bigger and more intense encounters., but like many things in this film, it was not the case. Storylines, characters and their motivations are all victims of what feels like “cutting room floor decisions”.  A lot of the edits also heavily affect the relationship between Todd and Viola, which never ever builds past the awkwardness of ‘boy meets girl for the first time’. Even in the story’s more emotional attempts at gaining the audiences investments, it’s generic reasoning behind their situations that garners more of an eye roll than a pulling of the heart strings.

The movie does have an incredibly choppy feeling to its story. Rather than flowing naturally, the story abruptly jumps from scene to scene, event to event without much tethering it together. And while some of the scenes are tense or exciting, it never feels overly cohesive enough to be invested in. Which in all fairness, is an argument that can be made about most young-adult-sci-fi-novel adaptations.

Choppy edits, an all over the place script and a lack of chemistry built between the characters puts Chaos Walking in the category of “has potential, but never reaches it”.